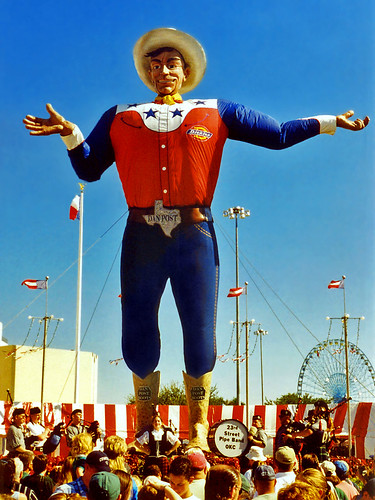 Hello ladies and gentlemen, I'm back, and with good reason! Us Texans are preparing to gather up in what might be our most epic NARP ever! Why the most epic? Because I said so goddammit. Firstly, the NARP is going to be not this weekend, but next weekend, October 17-19. It will be at DVDDesign's apartment in Dallas, with overflow at Blehman's apartment.

Why would you want to come to this occasion? Well, for one we're going to be drinking tons, if you're into that thing. I'm betting you are. As Blehman said, never pass up a chance to see Drunkskin in action. We'll also be playing lots of vidya games. All three current-gen systems will be present, along with the full Rock Band kit and a shit ton of RB/2 DLC. Also, DVD has a 60" TV. I think he's compensating for something. Finally, we're going to the Texas state fair! I know, why would a bunch of nerds want to go stand in the heat all day? Well, because we want to track down the legendary Chicken Fried Bacon. Yes, Chicken Fried Bacon. I guess there's some other shit you can do at the state fair too, but, whatever.

I don't want to say too much, because we don't know if the timing is going to work out, but this NARP might actually be sponsored by something that has recently become a big part of DToid culture. What am I talking about? You'll just have to come to find out. Or read my mind, if you're able to.

I have been able to confirm the timing, and thusly reveal our sponsor. The founder of BaconSalt has recently contacted DToider CountingConflict, and is shipping him some BaconSalt swag and promotional material which will be at the Texas NARP. I know, I am amazed too.

**UPDATE**
#Community
Login to vote this up!

Welcome to the Destructoid Austin group. This blog is meant for all Dtoiders that are in or near the Texas. The purpose here is to set up community events such as NARPs and any type of get together like conventions, cons, industry events, etc. This is done for and by the community because sometimes, just talking to each other on the Internets isn't enough.