Building a Better Boss: What Unforgiven Can Teach Us About Bosses 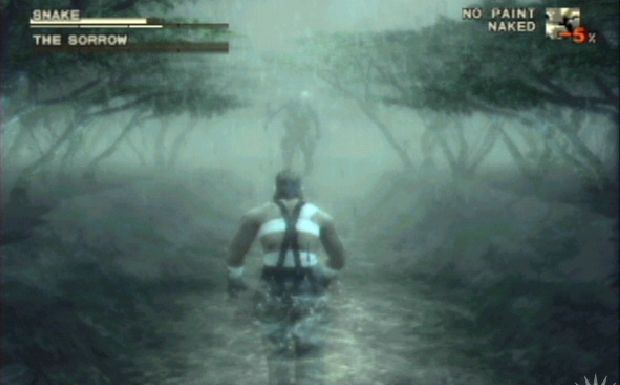 Not even a cardboard box can save you from this.

Finally, I want to look at The Sorrow from MGS3. The thing I'm after here is the idea of learning a specific rule set, and then completely abandoning it when it comes to the boss. This contradictory to most games as the typical format is for us to enter a level, learn a specific skill set, and the put that skill set to the test with a boss. However, The Sorrow took all the stealth, gun play, and clever survival tactics from the previous several hours and threw them out the window. A boss that does this can be absolutely terrifying, especially if a game could some how build this up.

What feelings of dread would loom over a player who knew that the final boss was somehow impervious to all of your attacks. That every way you had fought so far was going to be of no use. And then in contrast to that, how rewarding would it be to discover the way to defeat that boss who had feared so much just before. I'm not entirely sure what this looks like. I mean it could be something completely lame such as a player receiving a weapon at the end that suddenly makes their attacks super effective, but I'm more after something that throws out the previous mechanics (like healing your enemy instead of attacking it). Of course there would need to be some sort of hint.

This all said, traditional boss fights can be absolutely stunning if done right. I still consider the Hydra from God of War to be unlike anything else, and I'm sure all of you can think of great classic bosses. Still, it's wonderful to see fresh bosses as well, and I can only hope to see more and more in future generations.
#Community    #Rants
Login to vote this up!