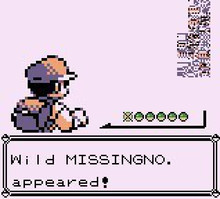 Look how hip and trendy and kewl I am with the using the "Thowback Thursday" thing. Maybe next I'll learn how to use Hastags or maybe the may-mays :O. An exciting proposition indeed. Anyways, I first want to start off stating that originally I was going to write this on Monday, and I did... an entire article on Tumblr. As I finished and was going to prof-read my article I decided to click the save draft button. So as to avoid losing all my hardwork. However when I went to go to the article I had written to finish proofing it and post it, the article was nowhere to be found.

So... needless to say I won't be doing the Tumblrs anymore...

Let's get to the meat of this article. I'm sure anyone reading this article has dabbled in a little Missingno related hijinx, but have you ever wondered why the Missingno glitch occurs? Before I delve too deep into writing this I'd like to explain something. In my opinion Missingno is NOT a glitch. I believe Nintendo still hasn't officially spoken on the matter, but based upon that facts that it is; Incredibly Stable (he will under no circumstances delete your save file, though you can forget about that Hall of Fame... that it'll completely trash), and he has a name that had been translated in English (Missingno. is short for Missing number), I feel it's reasonable to assume that Missingno is in fact an error handler meant for debugging purposes (lotta good that did). There's some further evidence to support this but we'll get to that later.

So there are two easy ways of achieving Missingno. and they are the most well known; the "Old Man Glitch" and what I'll call the Name Glitch. Admittedly they're pretty much the same glitch. If your unfamiliar with these glitches I'll explain. By talking to the Old Man with a hangover in Viridian City he'll preform a tutorial. After the tutorial you fly to Cinnabar Island and Surf up and down along the Eastern Shore. There our dear friend St. Missingno will visit you and bring the gift of 128 of whatever your 6th item is. Merry Glitchmas! There are two key factors to understand why Missingno appears. 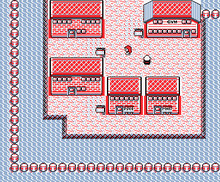 First, someone at GameFreak forgot to define what Pokemon to encounter on that Cinnabarian coast. What does that mean? Well the way Pokemon is made, certain tiles activate random encounters (grass, water, etc). However kept separate from that are objects which tell (or define) the game, which Pokemon are to be found in that area. So as your surfing up and down this coast the game knows that there is supposed to be a random encounter, but then realizes that there isn't any info for battles there (this is likely why the black screen for Missingno. is longer than the typical one. Because the game is trying to find some battle data). So the game tries to recover and pulls the information from your name, and makes a battle from that data. Why your name? Because it's the same place that the Pokemon encounter data is stored. Yeah. So why did they do that? Well you see inquisitive one, Gameboys were low on ram (and specs in general). So often to save space and yet be able to push boundaries to achieve a game like Pokemon data would have to take certain spots at certain times. It's pretty equivocal to a game now-a-days, only rendering what's on screen. If the game was constantly rendering everything the game wouldn't be able to have all that bells and whistles and sun glare That it does. Enter, the Name Glitch. So based on certain characters occupying the 2nd, 4th, and 6th letter slots of your name, you can get all sorts of interesting Pokemon to show up on that coast. 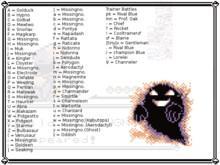 Why, or How do the letters work? Well this brings us to the second important thing. Basically each letter is stored using a range hex numbers 00-FF. Similarly each Pokemon and, for the astute among you, Trainers are stored using the same range of hex numbers. (Also, yes, you can fight Professor Oak. On a side note, it's believed that he was originally going to be the final battle after your rival, but was canceled later on. Which is why he's still on the cartridge and in English, but I digress.) Those hex numbers stand for the numbers 0-255, making 256 slots for Pokemon and battles. Why so many? Well 255 is the maximum value in hex code. So, if there are 151 Pokemon and 55 trainer battles, what fills up the remaining 50 slots? Missingno. Missingno. fills up 40 of those slots. The other 10 are various Glitch Pokemon unobtainable by the above glitches, but are obtainable through various other glitches. If your interested I highly recommend Missingno Xpert on the Youtubes for more information on those. What's really interesting is that GameFreak have revealed that originally they had over 200 Pokemon designed. Furthermore those 10 other glitch Pokemon have similar types and moves to that of Gen 2 Pokemon such as Marill, and Ho-oh. Some believe that those glitch Pokemon may have been pulled later in the development cycle, and those glitch Pokemon are the remnants of the aforementioned Pokemanz.

So what about the Old Man? Why do you get Missingno and 'M? Well, basically during the tutorial the Old Man replaces your name, because during the tutorial battle the game needs to display "Old Man" and not your name. However the game only resets your name when it's called upon (in conversations or other instances). So when the game looks for the Pokemon in your name they actually read "OLD MAN". Again the astute among you may ask, 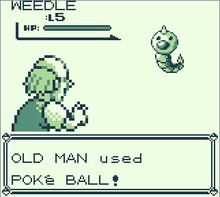 why then don't the letters match the corresponding Pokemon in the chart? Well, Mr. Mrs. Cooltrainer. Smartypants, the preset names are stored separately from the letters. Meaning they're loose cannons that play by their own rules. Along with OLD MAN, the starting names work this way as well. Red, Blue, Ash, etc. As long as it's selected and not manually typed in. They have their own Pokemon associated with them. For a full chart including the above with levels and other interesting things check out, bulbapedia.

TLDR; Some dummy forgot to specify which Pokemon were supposed to be on the Cinnabarian coast. So the game takes the data in your name or from the Old Man's name and applies it to the possible Pokemon during the random encounter. Due to a crapton of empty slots Missingno. It frequently appears.

Oh, almost forgot, As for the 6th item thing... basically it's the borrowed data issue again. The same data for Missingno's Pokedex is the same as the spot for your six item's quantity.

Also also Missingno's sprite is basically a jumble of random game tiles. So parts of people's houses and bushes, etc. Water, Bird type? More like hurricane type! OR they're taken from the sprites not associated with actual Pokemon. Such as the museum pictures or the ghost.

Also Also Also the reason 'M evolves into Rhyhorn is because the game doesn't know what 'M is supposed to evolve into and defaults to the first pokemon at 01, which is Rhyhorn. Why is Rhyhorn 001 and not Bulbasaur? Because the Pokemon hex values are not related to their Pokedex values but instead the order in which they were programmed.

Guys I could go on forever about Pokemon glitches, but I don't want to start rambling incoherently like that Old Man with a hangover... So I recommend looking up some stuff online there's a lot of really cool information floating around about the 1st Gen glitches.