[I’ve only just begun the chapter for the purple streamer, so there may be new things I’ve yet to see. These are my current loose thoughts on the game; a full review with differing opinions may follow in the future.]

Origami King shares part of a sentiment I have with the original No More Heroes; you’re here for the fantastic set pieces, story, bosses, and just about everything else in between is fluff to progress you along. For Origami King, that fluff comes from regular battles that have benefits and drawbacks throughout a lengthy (though witty and colourful) journey. On the one hand, not being forced to go through every encounter helps save time and patience, but on the other, it means not being able to afford things in the Mushroom Kingdom’s whack economy. With coins being both your currency and resource in battles, there’s this ludicrous swing in your savings from finding and gaining thousands of coins, only to go nearly broke when buying a new accessory or collectible. Restoratives and equipment are reasonably priced to avoid being hosed. Still, it makes me wonder why there wasn’t a separate resource for battles to keep your coin counter from fluctuating wildly. You’re never really hurting for confetti for very long, and confetti sack upgrades feel like a superficial dopamine hit after beating a major boss - Couldn’t confetti be a resource? Throw a bunch to incite Toads assisting in a party craze, daze enemies or fold them into ninja stars? The amount of strategy in regular battles is already wafer-thin with enemies so far being aerial, protected by spikes/horns/etc. or going invisible. The puzzle ring is admittedly something I welcome as a gameplay mechanic (having the battle arena sprout up anywhere with a spectating audience is a hoot), but with the only perk to successful solving being an attack boon, it feels more like I’m just trying to clear away debris than fighting back the origami army optimally. Paper Macho enemies make for some real-time action, but they’re not very exciting or fun; dodge, wait for an opening, hit their sticker, repeat until you drown in their blo- er, confetti. I wish they were incorporated into regular battles in some way to change things up, maybe as a type of sub-boss with other origami soldiers as cannon fodder cronies. When battles get fantastic is during major/chapter bosses, as the puzzle for lining up enemies is replaced by lining up the most efficient route to run along the arena. Your arsenal doesn’t expand, but how you use it becomes a puzzle in itself to find out how to deal or avoid the most damage, let alone any damage to begin with if the boss ignores or counters head-on attacks. It’s natural for bosses to be far from one another, but they’ve been the most fun I’ve had with the puzzle ring system, plus how big a spectacle the bosses themselves are. 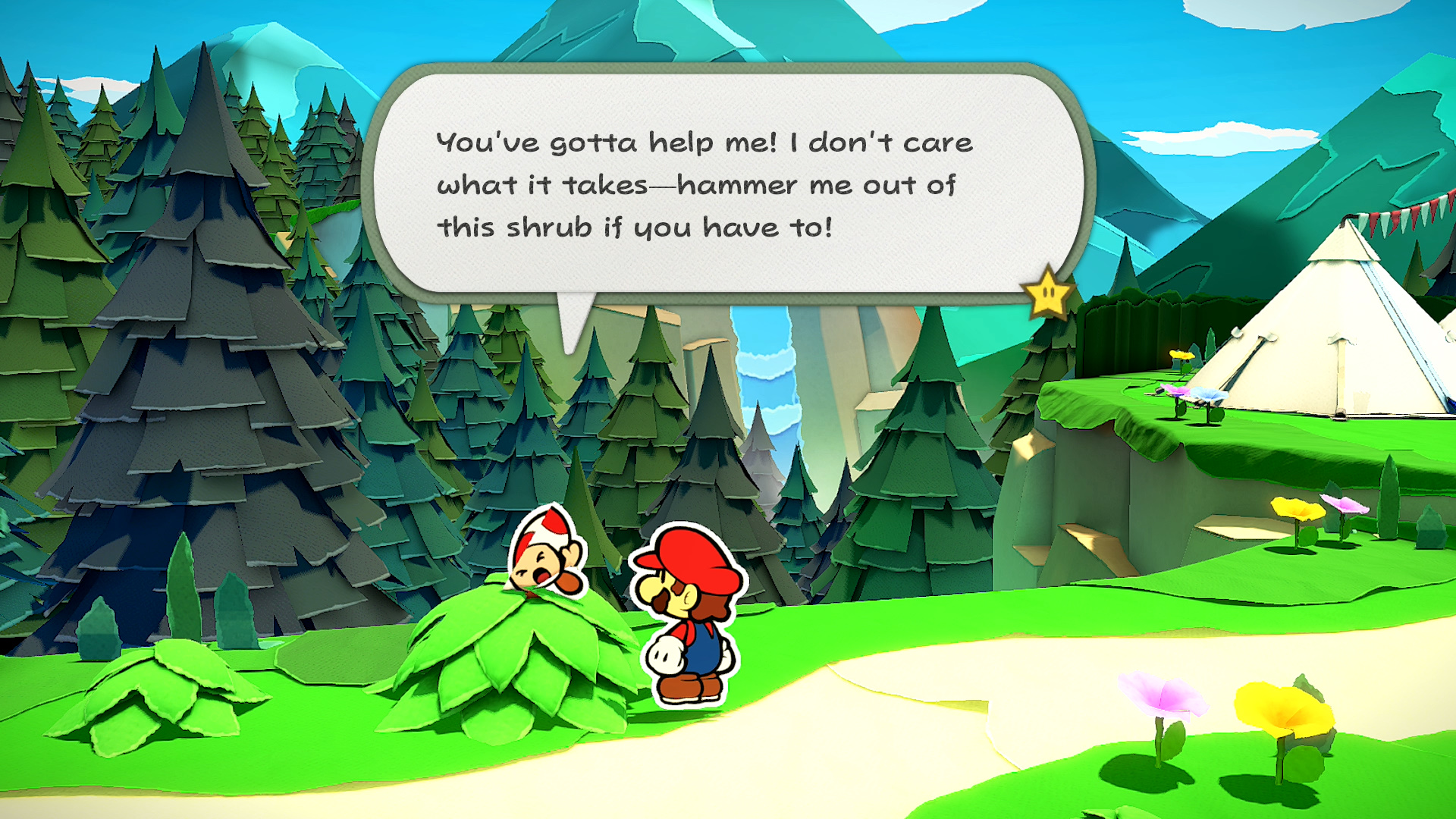 Par for the course with the series, the writing and world is a delight to read and explore. There’ve been plenty of funny moments, groan-worthy puns and character to go around in spades. The majority of the worlds’ residents being Toads primarily having only colours to differentiate them does get a bit old, but seeing how they fill and interact with the papery world is fun. Excluding ruins feeling atypical in their design, maps are full of colour and have enough incentive to poke around for secrets and prizes, making each chapter feel complete and worthwhile. Since nearly everything is made out of paper, cardboard or a derivative of, the world looks to be made of such shoddy construction material, but the visuals are so polished and clean that the environments feel natural despite being made out of grade school craft supplies. For a game to have battle encounters, it needs to have songs that are good and don’t get repetitive, and Origami King’s soundtrack delivers. The regular battles follow a particular theme that changes motif and instrumentation depending on the chapter you’re in, and they’re delightful bops… For combat involving puzzles. The battle themes betray the gameplay somewhat, as it feels exciting and eager for combat that doesn’t have a terrible lot of input. The boss themes, though? They fit like a musical glove to match the intensity. 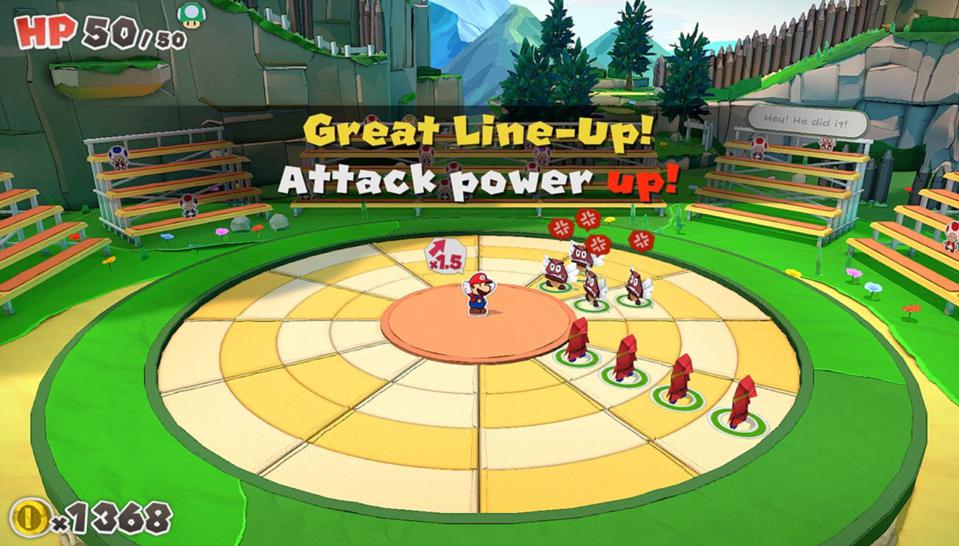 I’ve started to treat Origami King like a puzzle adventure game more than anything else; the main draws for me so far has been seeing the sights, being entertained by the witty world, writing and experiencing those great boss fights. The regular battles just feel like a spot of brain flexing to gather more coins and ensure you don’t steamroll areas with scripted fights. It’s certainly not a poorly implemented system, but enemies and team compositions being as flat as the paper they’re made of doesn’t leave me wanting to pick the game back up regularly for that reason alone. However, everything else is delightful, and when I do pick the game back up, I’m rarely not smiling.

I've been following the video game industry for 15+ years, so I like to imagine I know which way is up on controllers.
I'm an on-again, off-again amateur writer along with my video and stream production on Youtube and Twitch respectively. Since I don't know how to tell jokes, my commentary revolves around the what, how and why games get reactions out of us, be they positive or not. Oh, I also quack like an infernal duck when stressed.
The long game is for me to eventually have a career in the industry as a writer in some way, shape or form - Creative, critical, etc. Eventually, the offers I get of '''for exposure''' '''jobs''' writing for free will make way into something permanent.