There’s a fine and often foggy line when it comes to games designed to be challenging, having to balance providing enough tools, mechanics and means for the player while also pressing them to effectively use them as the challenge climbs. La Mulana doesn’t really ride this line as it leans hard on the latter, only providing the former if you can crack the various puzzles it presents - And do so alive or without breaking your controller in the process. It certainly has design choices that turn an action-puzzle platformer into something far more intriguing than its genre implies, but it also makes choices that make me legitimately question if the game wants its players to walk away frustrated as sin. If it wasn’t for the rush of solving diabolical puzzles, slaying bosses that quickly become your nemesis or making sense of the ruins' secrets, I’d have written La Mulana off ages ago.

The original La Mulana looked and sounded like an MSX game, and if you thought the soundtrack then was fantastic, the remake brings those already slapping tunes further to life. Each area has its own theme and music to make them feel distinct, and that also goes for its art and design. Initially, it can be a bit jarring with how characters and enemies pop on screen compared to the environment, which gives me ‘painted mural’ vibes, but enemies should contrast so much; otherwise, they’d continuously blend in and result in cheap shots. The game starts off innocently enough with you playing as plucky archaeologist Lemeza Kosugi off to explore the titular La Mulana ruins, but that innocence doesn’t last long. The initial thirty minutes to hour of the game provides a fine introduction to the ruins (including telegraphing your first taste of instant-kill traps), scanning tablets and the environment for clues to varying puzzles; hit this block, take a leap of faith, pass through a fake wall and so on. 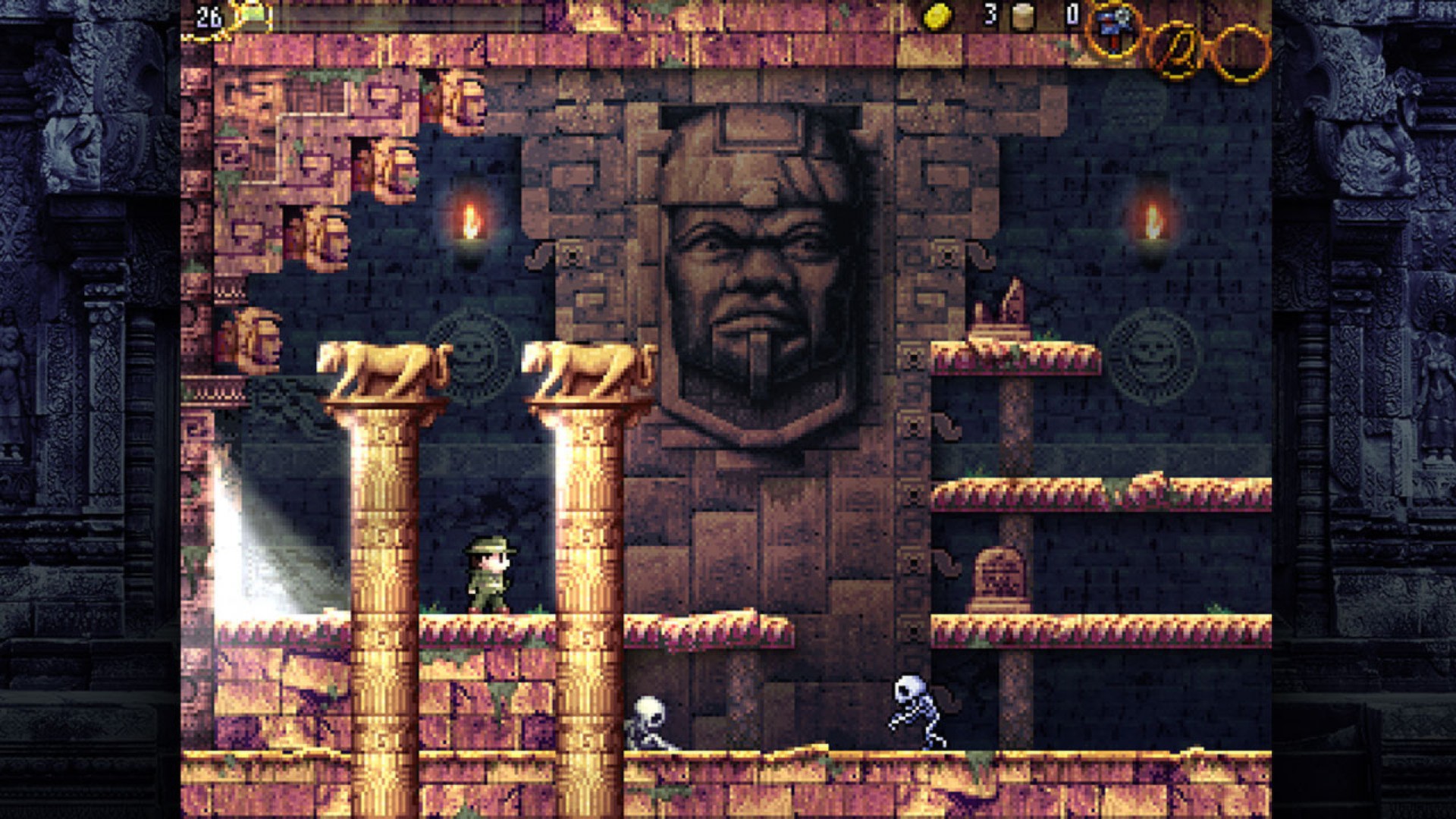 La Mulana teaches you that trusting ‘regular’ game conventions won’t do much good here, with clues and solutions often being cryptic or bizarre in what needs to be done. Frequently solutions make sense when you sit down to think about it, but there are instances in the mid-to-late game where logic is swapped for maddening reasoning if your note-taking isn’t nigh-perfect or if you take clues too literal or loose. Not everything can be solved by attacking it, as the Divine Eyes shooting Lemeza for a percentage of his health in retribution for wanton vandalism will see to that. While there is a tool that records clues, the lack of organization features means the best way to investigate is through good ol’ pen and paper, writing your own notes, theories, maps and trap locations. This isn’t just a quaint way to go about it; it’s borderline a necessity if you don’t have a photogenic memory or one like a steel trap. Some clues aren’t relevant to that area or until you’re hours ahead in the game, consistently leaving these nagging hints of new items or ways forward in the back of your head, unable to locate just where to apply this information.

There’s no argument to be had on the ‘ethics’ of using a guide because there is no argument; using a guide can absolutely offset many puzzle frustrations. Still, there’s something to be said about finally cracking a code or discovering just what has to be done in a room to unlock new paths, time-saving shortcuts, relics, equipment or causing some sort of event to occur elsewhere. Equipment, whether it helps with puzzles or not, is your way of flipping off the ruins in return. Wayward projectiles knocking you about? There’s a shield for that! There a tough or annoying enemy on a higher platform you don’t want to deal with? Take them out with flares! Solutions feel wonderful and exciting, as one less puzzle means more clues to clear from your notes and memory, narrowing down results for the next puzzle or roadblock to bang your head against. I’d call La Mulana a detective game as well since you’re chasing or following multiple leads at all times due to the nonlinear nature of the game. If there’s a particular set course the game wants you to go through, I have no idea what it is; regularly, did I enter rooms and areas I had no right to be in since I lacked particular items or hadn’t triggered certain events elsewhere. I’d be solving things out of sequence somehow, but luckily, I didn’t encounter any game soft-locking instances and being impossible to finish. The inclusion of save points tripling as fast travel and checkpoints is heaven-sent as you’ll be revisiting them frequently, not just for travel purposes. 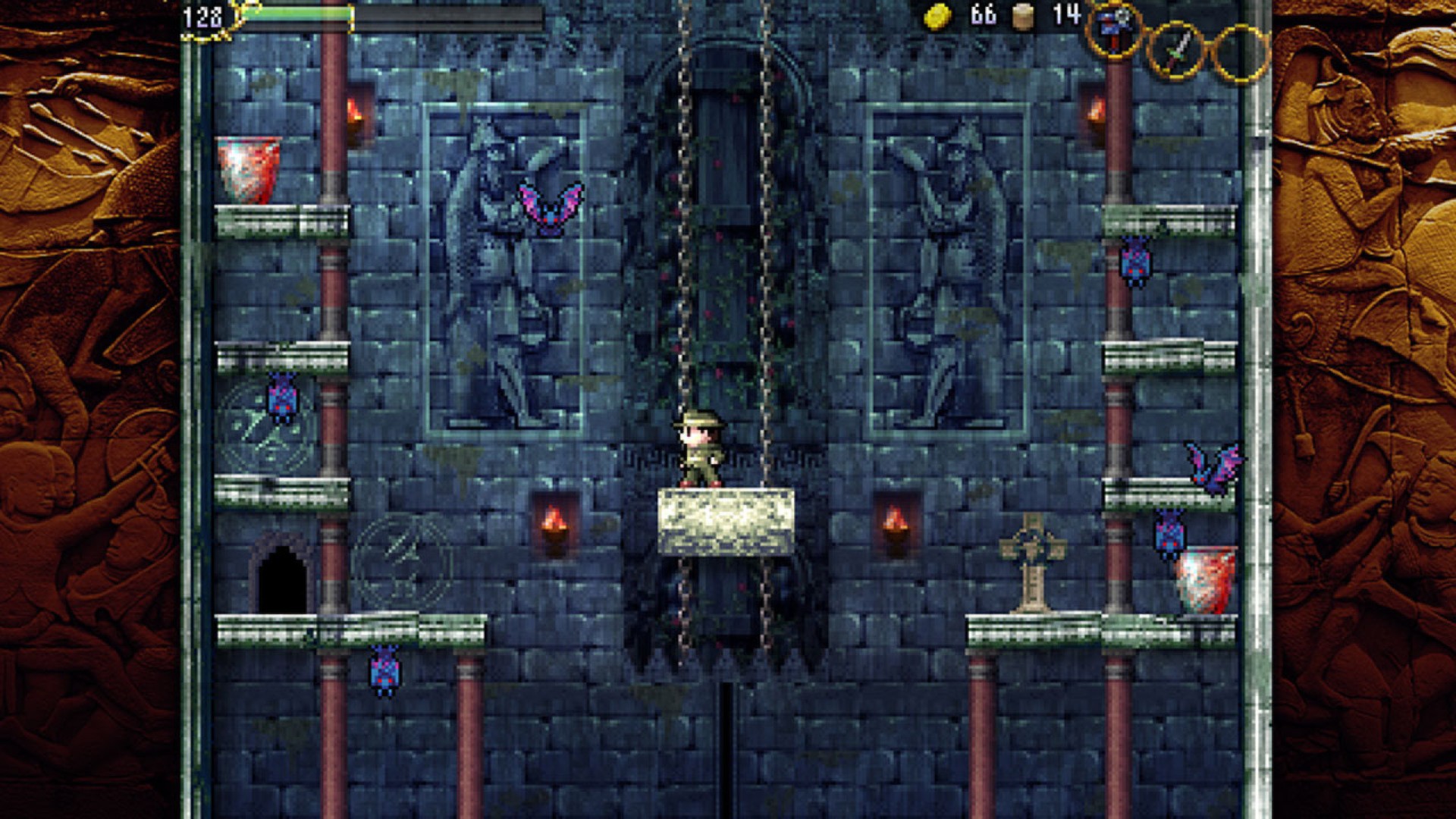 Dealing with the mental legwork of exploring the ruins and puzzles is one thing; physically traversing it is another. La Mulana actively wants you dead, which is expected of ancient, hostile ruins, but you feel less like a heroic explorer dodging near scrapes, and more resemble a court jester getting eggs to the face. Most instant-kill traps are telegraphed plainly, or you can suspect something is off, while others are waiting out of sight and (seemingly) the only way to notice them is through fast reaction time or by taking the death. Trap doors and fragile floors love to appear in the most grating of places to primarily just waste your time, and I could go on about the bats, birds and fish designed only to pad out the game length. A majority of the enemies in the early to mid game act as deterrents to impede your progress, but with how this is a 2D game with some precarious platforms, deterrent is the polite word for angering. Lemeza suffers knockback when damaged, and the lack of recovery until he hits solid ground means that if you’re multiple rooms up and get clipped by a bat, you’re doing the tall climb back. Tagged by an enemy bullet while riding an elevator? Gotta wait for it to return to try again. The frequency of one wayward enemy or projectile forcing you to retread water is further insufferable as the damage taken is negligible. It’s not punishment for getting hit; it’s punishment for your time.

When I said new equipment lets you flip off the ruins, I wasn’t coy; ways to counter these asinine issues feel like Lemeza (and by extension, you) is slowly but surely ascending to becoming master of the ruins. Even bosses, whom on the first attempts had me throwing my hands up and calling shenanigans, become doable once equipped with the right weaponry and recognizing their patterns (or by buying a gun and shooting that stupid fish boss in its stupid face). For as much frustration as the game brings and inflicts, there’s equal (if not more) joy to be had in overcoming its challenges. During my live streams I had called La Mulana my ‘nemesis', as at one point I gave up on the game only to return a few years later with a vengeance to see it through - And when I finally did? There aren’t enough chef’s kiss gifs in the world to summarize how I felt. 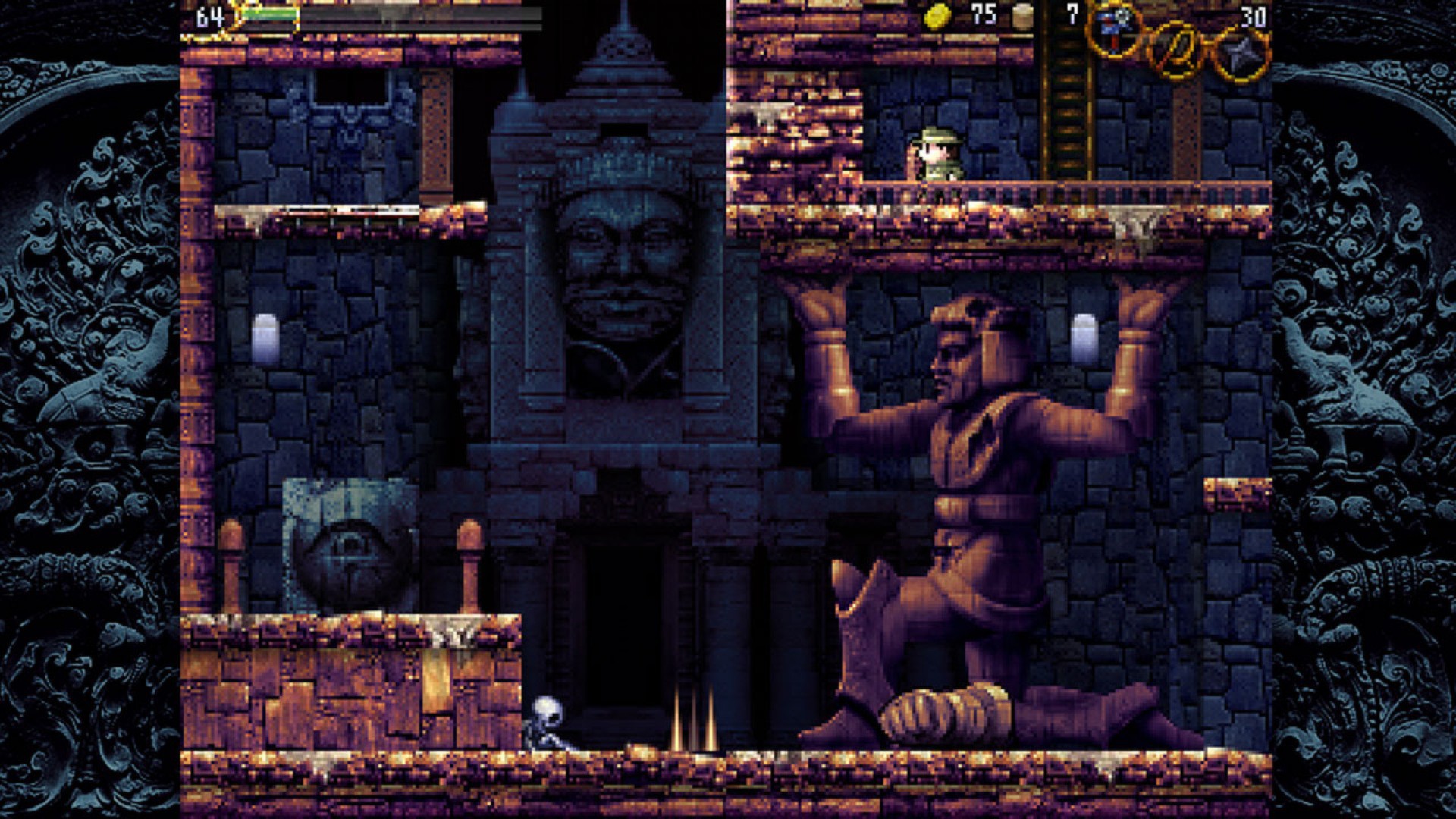 Purposely designed frustrations aside, La Mulana is undoubtedly an experience - One that I’d warn you to maybe avoid playing if you’re already in a foul mood. For Lemeza to go from a schmuck with a whip to having his own arsenal while skipping around the ruins is a wonderful curve to play through, even if there’ll be frequent delays from challenging puzzles and yet another bloody bat knocking you off a perch. I wasn’t expecting to get this much from an action platformer once the credits ran, but in the end, I’m glad to have seen it to completion. I’d recommend La Mulana; just practice meditation techniques beforehand and get ready to fill up some notebooks.

I've been following the video game industry for 15+ years, so I like to imagine I know which way is 'up' on controllers.