I don't know if the term “Cutscene” has a formal dictionary definition, but I take it to mean those points in video games where the gameplay essentially stops, and a movie of sorts plays. This movie may be fully animated or essentially a set of talking heads discussing the plot. It generally means that gameplay has stopped, and the player can take a breather.

Some games have hours and hours of cutscenes. Some have barely ten minutes, if any at all. They have become more prevalent in modern games though, especially since things like motion capture have become such a big part of the industry. But they are also a point of contention among gamers. Should games have cutscenes? Shouldn't that stuff be saved for the film industry where it belongs? Can cutscenes and gameplay be integrated? 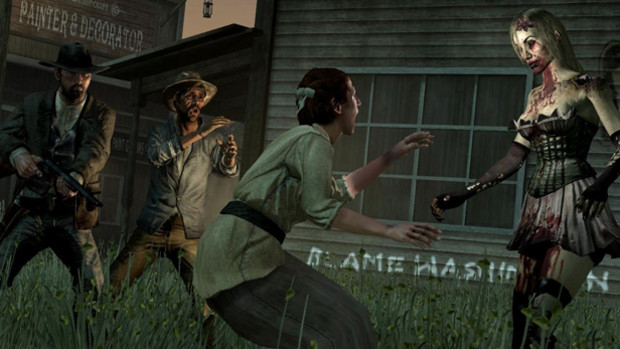 You don't look busy. Let me explain why the zombies are here.

That's not to say that this method inherently does not work. Like I said, Portal 1 and 2 do it brilliantly, having important stuff happen during more calm points in the game. Chell would be walking through a room without a puzzle while GLaDOS or Wheatley spouts on and on. Or, in Grand Theft Auto, plot can happen while you're driving someplace. That works, and works well. But if you're in a firefight in Grand Theft Auto, or running from the cops, the last thing you want is exposition being shoved at you. It could be the best exposition in the world, but you won't be hearing it.

This flows nicely to my next point. Cutscenes are meant to be something of a breather. Anyone who has seen Transformers or Sucker Punch knows that “non-stop action” is hardly a compliment. Games took a while, but I think they are starting to realize this too. You need to have moments of calm, where the player can realize a little and let their heartbeat slow down. I think that this is where cutscenes can serve their purpose perfectly. They can be those moments of calm between gameplay, which is where the thrills should be.

And this is where we get into my thoughts in regards to my past blog post. You see, too many modern games (like Uncharted) try to put those thrills into cutscenes as much as gameplay. I think this creates the opposite effect. When I'm playing Uncharted, the thrill should be in me getting Drake out of some sort of scrape, not the game getting him out of that scrape for me. That, to me, is not thrilling. At least, not in the way that video games can be thrilling. Movies are essentially one long cutscene, but in a game, the thrill comes in the way I am challenged. Not in the way the character escapes demise. That's why a game like Uncharted (and a game like The Order: 1886) doesn't work for me. The game is creating the thrills with no interaction from me. I'm not getting Drake out of a crashing airplane--The game is.

That's not a game. That's a movie.

But Derek, you ask, you said you like JRPGs. They have tons of cutscenes that do that kind of stuff!

I would argue that JRPG cutscenes do not that kind of stuff, actually. Let's take an example from a generic JRPG I'm going to call Generica. In Generica, let's say the gameplay flow is something like this:

Sound like a fair assessment? Sure seems like cutscenes really interrupt the gameplay there, especially since there's one in the middle of the dungeon. And you're right, in a sense. They do interrupt gameplay. But they are also kept separate from the gameplay. That, I think, is the big point I'm trying to make.

So, the cutscene plays that introduces Generica's dungeon. It tells me it's dangerous, I should expect monsters, but boy oh boy is my party excited to venture forth. The cutscene ends with my characters entering the dungeon. Note that this cutscene presents the problem to me. That problem is surviving the dungeon. It's not solving the problem for me. I still have to navigate the dungeon. That falls on me, the player. The game is giving me the tools to solve the dungeon (the party members) but it's up to me to put them into a group that can defeat the monsters I face.

The second cutscene tells me I'm doing well. I've made it this far. I'm doing something right. But I still have a ways to go.

Damn right I am.

Then, the boss cutscene. In my opinion, a good JRPG pre-boss cutscene has to do only one thing. It has to show off the boss. Let's assume that the boss here is one of the party's rivals, one who I may have seen in other scenes. Here, I get to see the character in full. They show off a little, and the cutscene ends with them “attacking” me. Then, I'm taken to the boss battle.

This cutscene presents the challenge (the boss) and then challenges me to beat it. If the boss beats me, I have to try again. The game does not continue if I lose, nor does the game solve the problem for me. It presents the problem to me, and expects me to figure out how to solve it on my own.

I beat the boss, and the “Whoo-hoo look how awesome you are” scene plays. Then, a new area appears, furthering the story.

This is an example of good cutscene design. It presents me with the challenge, tasks me to overcome it, and then gets out of my way. Games such as Uncharted and The Order do not do that. They may present me with a challenge, but more often than not, another cutscene solves that problem. Drake is in a burning building. I have to climb the stairs, going through scripted “thrills” on the way. Oh no, that floor broke! How dangerous!

Except that the floor breaks every time. I, the player, am not in any danger because the game is pushing me through a sequence. It's not presenting me with a challenge and expecting me to solve it. It's walking me through a generated thrill.

The boss battle in Generica may be incredibly challenging if I'm underleveled, or it may be incredibly simple if I'm overleveled. The game isn't watching to make sure I have a certain set of “Gasp” moments. It's just presenting me with a challenge to overcome.

In my opinion, this is how cutscenes should be used in video games. And this is something we don't see nearly enough these days.

Agree? Disagree? Let's talk.
Login to vote this up!

Derek spends his days trying to keep up with Sonic the Hedgehog, his evenings attempting to jump as high as Mario, and his nights by sneaking into the Ninja Turtles' secret lair in the hopes of getting some special ninja training from Master Splinter.

Born and raised in boring ol' Massachusetts, Derek has felt the call of fantasy from a young age. Proudly declaring that "Reality is boring!" he strives to find new and interesting fantastic worlds with an unmatched drive. He hopes that his works will one day inspire others to explore the fantastical. He welcomes anyone on board for the ride.