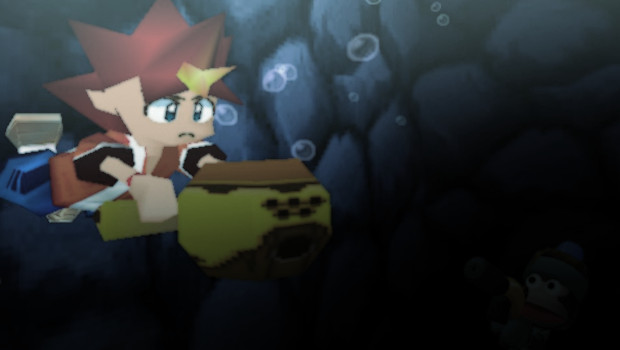 Yeah, feels about right. It's an extremely difficult choice to make, picking my favourite game of them all, but this feels like a solid choice. I mean sure, it lacks the deep lore of Oddworld, the sweet rawness of Doom and the satisfying flow of Arkham City, but I don't think it needs those things to begin with. It's old, simple and goofy, and that's the way I like it!

I already wrote a blog about Ape Escape a while ago, and it went into a lot of detail about what exactly makes the game so good. This one won't be quite as long, and it will mostly serve to explain why the game is my favourite, rather than what just makes it good.

Basically, I have four points I want to cover:

Being the first PS1 game to require the DualShock in order to play might seem ambitious by itself, but a lot of these "tech-demo" titles tend to be pretty underwhelming. Even Wii Sports, which is a fun game, is very small, and didn't do that much to push motion control as a concept. Then there's Ape Escape Move, which is a complete joke.

But this game is a much different story. Sony didn't just want this game to compete with other platformers, no, it had to surpass everything that had come before. The result was a game stuffed with huge levels, advanced AI, revolutionary gameplay and tons of unlockables. Ape Escape became every advertisers wet dream, with so many different features to promote that it almost became overwhelming. The fact that all of it managed to fit on one disc is impressive, honestly.

While most experimental games like this only go as far as dipping their toes into the terrifying ocean of new technology, Ape Escape did a cannonball, and it payed off big time! Ambition is something that I value a lot in games (and all media), so a game like this was sure to win me over from the start.

No, really, it is. You wouldn't think so by looking at it, but Ape Escape does have its fair share of depth. The "advanced AI" part above was no joke either, as the monkeys in this game probably have the most sophisticated behaviour of any enemy in any game from the era. While your Sligs and Genome soldiers are almost entirely reactive to your presence, the monkeys are far more independent, and spend their time differently based on each individual personality. 206 of the damn things, and the developers still put the effort into making sure that one of them does a handstand, and that another one draws grafitti on a wall. Incredible attention to detail here.

Then there's the stealth mechanic, which is completely optional, but very useful for sneaking up on some of the more difficult monkeys. Well, except maybe the ones with the green pants, since they tend to have a high alert level.

Oh, right, that's another thing: Pant colours and mokey levels. See, the pant colours indicate what the monkey's personality is (red=aggressive, blue=fast, etc.), and the levels are split between how violent, fast and observant each monkey is. No two monkeys are the same in this game, so keep an eye out.

I really, really think this was a fantastic decision. If this level of individuality had not been here, we'd still have a fun game (the levels themselves still kick ass), but having it in there pushes the game to a completely new league.

It has a central hub, but not a big one. The big, good stuff is entirely reserved to levels, while the hub itself is split into four sections: Level selection, saving, tutorial and minigames. Everything is basically laid out and easy to find, but the hub is still fun to navigate. It's a perfect balance of function and form, and minigames being purely a side distraction is a design philosophy that everyone should follow (fuck that fishing bullshit in Jak & Daxter).

Besides, it looks and sounds pretty great. Like, yeah, the graphics have obviously aged (draw distance ahoy, captain!), but the look has not. It makes fantastic use of colours, has some very memorable character designs, and the environments themselves are fun to look at.

Then there's the soundtrack, which makes me wet. Soichi Terada's drum'n'bass goodness is something you have to experience for yourself. Take a listen!

Aside from being a big, complete, satifying package, which has tons of depth to it, and which still looks and sounds great, Ape Escape is fun in its purest form. It's good, people! It's seriously good!

Consistently fast paced, tight, varied, expansive and funny, I think Ape Escape very much deserves to be known as my favourite. I always get an urge to play it whenever I think about it, an effect that no other game has had on me, and isn't that just something special?

I've actually been pretty restrictive in this blog, believe it or not. This game has an overload of amazing things to talk about, and it's hard for me to really get my head around it all. I could talk for hours about this game, and I probably would, if I had the time. For now, you'll have to do with this.