Fangs for the Memories: Hunter Hunted 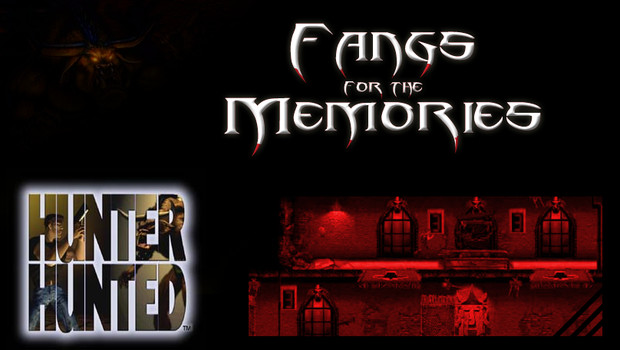 The year was Windows 95. The grass was blue, the sky was green and the birds were barking. Pixels were as big as bricks, and I had to walk several kilograms to get to the glue factory every Thursday. Times were rough.

Good thing we had computers in this age, and some really weird games to play. Games like Commander Keen, and that weird Mickey Mouse themed puzzle thing. But none of those really stand out to me anymore. Not after the days of Sierra's Hunter Hunted.

Hunter Hunted isn't really a horror game. I might make it look like one in the header, but that's just to fit the theme. No, it's actually a sidescrolling arena combat platformer hybrid thing, with levels that exist in different layers. You get a bunch of weapons to use, there's health to pick up, some areas are secret and there is a wide variety of obstacles to surpass and enemies to go up against. It's actually pretty cool. It feels a bit like a competitive shooter, except that the levels are structured in a way that means you most likely won't see your opponent most of the time, which builds up a lot of tension.

You get to choose between two kinds of characters: a typical, buff 90s action hero dude, and a big, scary, horned monstrosity. The game is pretty cheesy in a lot of ways, all of which I like, but it might make one wonder why I would find it so scary. Well, there are a bunch of reasons for that, the most understandable of which was my age.

I don't actually remember my exact age, nor the exact year, but I was quite the little turd. Not only that, but I didn't speak a word of English. It was basically an alien language to me at the time, and as a result, I had no idea how to properly pronounce the game's title. "Hunter Hoonted" was my version, and I was fine with it, even when people tried to correct me. Guess it sounded spookier to me.

Of course, the big Doom-esque bull monster (or whatever it's supposed to be) is another big reason for my pants pooping (THAT WAS A JOKE I DID NOT REALLY), despite being a playable character. It was difficult for me to relate to this strange being, but it also made playing as it all the more difficult. This thing also made a lot of noise when walking around, which is parts silly and scary.

It should be mentioned that you're never really outside in this game, to make sure you never really feel free. I guess this is mostly due to the game's lore, which has to do with you being enslaved by an advanced alien species, but it offers more than that. Always being surrounded by walls means that you never really get an idea of where exactly you are, and you never feel free at any point in the game. You never feel like you can escape, or that you have escaped. The environment is closed off, and everything wants to kill you. On top of that, everything is gritty, rusty and grim looking. It clearly takes place within a sadistic obstacle course that's meant to kill its participants. In a way, it reminds me a little big of TimeSplitters' level designer, which never allowed you to go outside either, and which could lead to some pretty creepy, isolated levels.

As you'd probably expect, the sound design is very unsettling. That was the case in most games from this era, intentionally or not. We have a lot of loud noises going on in this game, and with the lack of background music, they really stand out. I do believe you can hear an obstacle before you see it on screen, so you get to feel the thrill in advance. Isn't that just cunts wonderful? Not to mention the voice in the beginning of every single player mission, which is awesomely terrifying.

All things said, however, I'm pretty sure that the scariest part of this game, to me, was the Bruiser enemies. Big fucking robots that would attack you with missiles. Mhmm, yup, good times! Hell, for their size, they aren't even that slow. I clearly remember managing to get behind one, thinking I had a chance, but nope. In a single jump, it turned around, ready to blast my ass full of pain. I was not prepared for that, game. Thank you.

I never completed this game back in the day, and I'm not even sure if it was very good, but I've gotten pretty interested in trying it again. I'm not sure what reminded me of it to begin with, but thinking back, it really did shape my taste in gaming, giving me a love for difficult, grittier action games. It has helped making me appreciate variety in entertainment, and it probably changed my opinions in ways I don't even think about.

Oh, and I have this friend who used to be so scared of the game that he apparently couldn't sleep. Haha, what a wuss!

The game in action: