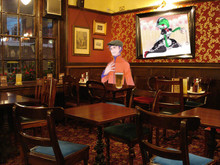 The general sound chatter and drinking dies down, replaced by the constant drumming of the rain against the window pane. Last orders have been called and the men are pulling down their hats and pulling up their collars as they prepare to brave the weather outside. One man, however remains where he has done all night, sat at a small table in the corner, nursing the same pint of Thatcher’s Gold he had bought two hours ago. The landlord of The Speckled Grouse, Geoff, was a kindly sort of man, slightly rotund and with a face made blotchy through partialness to port, he made it his business to know all of his regulars’ business. He let out a yawn, opened up a packet of cheese and onion crisps, plopped a pickled egg inside and pulled up a chair next to the dejected looking, orange wearing, purple haired man.

“What’s the matter with you then Kururyu, you’m ‘ad a face like a smacked arse all night. Why you didn’t even crack a smile when wob-Leigh fell over again!”

“Oh, hi Geoff, I hope you don’t mind my staying a while, I don’t feel like going home quite yet. I’ve just been thinking, well reminiscing, if you could call it that, about before I moved here.”

“Oh ah, ah” Geoff’s lips pursed in the effort of remembering through the fog of alcohol and drowsiness, “Why… you’m been ‘ere a fair old while now mind, like, 12 or so years, I reckon. You moved ‘ere just as our Julie married, look, so that’d be about right.” He took a bite of the egg, “Where’d you live to before, like Chippenham way wasn’t it?”

“I knew it was East of ‘ere like somewhere. Why did you move ‘ere? I won’t pretend not to ‘ave ‘eard the rumours, but I don’t reckon you’m ever actually told me yerself.” He ripped open the crisps and slid them into the middle; Kururyu took one gladly, and had a sip of his drink.

“Out of interest what do the rumours say?”

Kururyu reached for another crisp, but the bag was already empty, Geoff had apparently been eating them in lieu of spoken punctuation marks. The pub was now empty and Geoff leant over and switched the news channel on, just to add some background noise.

“They’re not too far off of the mark; I dare say most people in my native country probably think I’m dead and probably quite rightly glad about it too. But don’t worry, I’m not wanted, there won’t be any trouble because of me, not any more at least.”

Geoff leant in, “Oh ah, I was a bit of a devil myself before our Maud reined me in look. Did you ever meet our Maud? No, I don’t suppose you di…”

“Would you have said I was a good Christian, Geoff?”

“I s’pose I would, why I don’t think I have ever known you not turn up down the Chapel. Why?”

“Well, back when I was in Japan I guess you could say that I got mixed up with a heretical sect, founded it in fact. We’d always been very religious see, and I guess in a way it was a way of ensuring that I kept in touch with my daughter after my wife left me. For a time I suppose I did truly believe in what I was saying, although now I see how ridiculous it really was.”

“Oh ah. It’s all very clever stuff really, much of it flies over my ‘ead I do admit! I guess out East you din’t ‘ave proper ministers though either, no one to, like, help you along.”

“You’ll probably laugh at this, I got it into my head that it was God’s will that I should summon some ancient Akkaidian demon named Belberith, and kill him. Almost did too. I managed to implant a powerful demon in my daughter’s soul, modify a seemingly limitless number of Nintendo DSes so that they could summon demons and even got as far as summoning and being consumed by Belberith himself (although, not as completely as everyone thought).” Geoff raised his eyebrows in an impressed sort of way. “Luckily though, I was stopped. It would be just my luck that a teenager in the city would actually turn out to be a second Messiah! It also so happened the he had been being groomed to do so by some angels and his creepy cousin, and had managed to assemble a motley crew of attractive 17-25 year olds who were all unusually talented at summoning demons. I am glad they stopped me, don’t get me wrong, but I don’t think I’ll ever really get over it. It’s not so much that I want to kill God anymore or anything like that; it’s more that all that time, all that effort – an entire organisation which I had built up from scratch. All gone thanks to a few trendy teenagers. It's pretty implausible wouldn’t you agree, Geoff? Geoff?”

Geoff was now contentedly dozing, his feet up on the opposite chair, a half empty glass of port seemed to have materialised and was now resting on his derby, rising and falling as he breathed and threating to add one more stain to the tattered carpet beneath.

“The worst bit, is that my daughter sided with them, and not me – her own dad.”