I don't know much about redheadpeak. (Teacher. Gamer. Geek)

All I really know is that I see his avatar floating around this site "saying clever shit". He seems like a cool dude. Now, the reason I bring him up is that he plans on writing some sci-fi gamer fiction in the near future. I'm all about new stuff in the c-blogs, and I'm excited to see how it pans out. No pressure, but I'm eagerly awaiting the false-itudes.

Here's what I remember about this game in a few words: NES, adventure, puzzle, platforming, blue shirt, yoyo, letter, secret, message. Let me go do some research...

...and the research has led me to this video that decribes the game way better than I could ever be willing to.

This Shit's Pretty Half-Assed So Far.

That is a fair assessment of not only this c-blog, my life too. Nowadays, I'm so focused on planning and doing stuff right. So much so, that I end up doing nothing at all. That's no good. Back to half-assed success, I say. I do plan on starting a YouTube series soon. I doubt if it will be gaming related, so I ain't gonna spam you guys or anything. The only thing concrete for now is that it will have a format and be delivered consistently. Who here YouTubes? I'll take any advice I can get. What would you watch?

I've stated recently, that I've been unemployed for about 6 months. Subsequently, I've lost all my money, games and friends and weed. I've also been, without booze and quit cigarettes...so, there's that.

Even back way in 2009, when I had all those things, I was still terribly depressed all the time. Go figure. Mirror's Edge introduced me to parkour. And after finding some reasonable videos on YouTube, I was inspired to go out and actually enjoy my spare time. I had a physical hobby. I met friends and even though, It's been years since I've done any "monkey shit" and I've lost touch with those people; I still consider those to be the best 2 years of my life. While, I don't expect Mirror's Edge 2 to have, the same effect, I already know that it's possible for me to be happy again...eventually.

This is the exact video that made me decide to try parkour.

Hotness of The Blog: Monica Santhiago 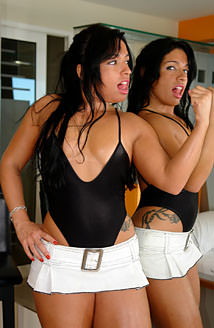 Today we're looking at a song called "Car Radio" by Twenty One Pilots. This song, is special to me. It blew be away the first time I heard it, and every time since. It's fairly recent yet still has a nostalgia factor for me. I can't really explain it. It brings back memories, old, new, happy and sad. Enjoy.

That's all for now. Thanks for being here.