What is a Hero?: Solid Snake

3:01 PM on 10.24.2007 (server time)    0
Might I suggest reading the the Introduction and my piece on Link. I was going to do Mario but Snake seemed like such an intrugiung character and people were asking for him so here he is. I think Snake raises a real question on whether we should take any hero at face value, especially the ones that conform easily to the norms of heroism. There is usually something more behind them, and if we look into a character we can see that while outwardly they may appear one way inwardly their heroism comes from somewhere else (that totally needs to be the concluding sentence in a monologue for some cheesy movie). Of course this is usually the case with stereotypes, isn’t it? A prime example of this is that my google search for images turned up plenty of stuff with snake shooting a gun or holding a massive weapon but almost nothing of the man talking or sneaking, both of which he does more often than shooting in reality.

Solid Snake is a soldier whose background story is about as convoluted as it comes. Basically he’s been double crossed by his father (Big Boss, the man he was cloned from), brothers (other clones of Big Boss) and commanding officers (Big Boss again and his old team FOXHOUND) and yet he still goes out on insane solo missions all by his lonesome and often involving some form of the nuclear mech Metal Gear which is threatening the earth with nuclear destruction via a secret cult like organization. In short he saves the world while going through plenty of family issues. Snakes methods for saving said world usually involve guns, knives and stealth and while many of his confrontations with his enemies involve a lot of dialogue they mostly end with them fighting and Snake winning via a death blow. Although his operations are usually covert Snake does have a public image of being a great hero, a fact he studiously denies.

What Does He Teach Us About Heroism

On the surface it would appear that Solid Snake is the prototypical stereotype of the classic action hero. White guy, who uses violence and weapons in order to solve his problems with other people and save the world. Hell his character design throughout the games has been based on the popular action heroes of the time from Mel Gibson to that guy from the Terminator (above). His name, as everyone knows, is even derived from Snake Plissken from “Escape From New York” and he is a “hero” who fits more into the white, violent, loner, bad ass mold of the stereotypical definition of hero more than any person ever. Yes, Snake’s roots are easily the very definition of the type of hero that shoots firsts and ask questions later, from a quick glance all we can gather about heroism from him is that it involves violence and a gravely voice. On paper Snake teaches us that heroism is exactly what culture defines it as: risking your life and killing other people for the greater good.

But one of the great parts of video games is that you get to spend more than a few hours defining a character and anyone who has ever played even a single game featuring Solid Snake knows that taking anything at its surface value is completely and totally idiotic. For starters Snake continually reaffirms the fact that he does not consider himself a hero. Throughout the Metal Gear games (the ones featuring him at least) he admits that he is a hired gun, and that killing people is not heroism. Reaffirming this is the “death speech” that almost every villain delivers in the games, repenting upon a life of violence. Also of note is that Snake seems to seriously regret killing many of these people.
The problem is, everyone else in the game thinks of Snake as a hero. He is constantly referred to as one and really by the end of the game you aren’t sitting there going “Man, that Snake, what a not hero.” The funny thing is the hero is fighting against the very same social norm that he helps to define. As intelligent players we can see the difference but as a definition for heroism the games are as conflicted as Snake himself is. 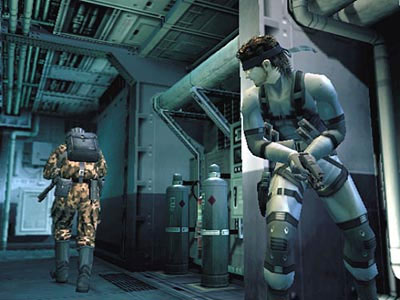 Then again the emphasis on stealth throughout Snakes adventures leads us down a line of thinking that does not define a hero by amount of bodies he stacks up but the amount of bodies he avoids stacking up. In almost every situation it is far easier to avoid the guards in the MGS games than it is to slaughter them and usually it is the preferred tactic. While the reasoning for this is usually because dead bodies are hard to hide and not because taking a life is wrong it does show that killing in not the only way to accomplish a goal and while Snake can take out these soldiers, lateral thinking and a cardboard box can be just as effective and far less damaging. Still once busted, Snake shoots to kill. Snake himself, much like the storylines of his games, is quite the conundrum as a hero.

Snakes adventures also define the hero as a loner to the extreme. He is always sent in by himself (as long was are talking canonically here) and the scant amount of advice he gets he receives over two way radio or from people he pretty much shoves to the side after rescuing them. He is helped out once or twice but all the real grunt work is done by him, heck even when advice is given he rarely goes along with it willingly. The man lives in Alaska on his own, for Christ sake, he isn’t really a team player even in his regular life. While relationships do seem to develop they hardly ever deepen, which brings me to the next and final point.

Snake is incredibly closed off about almost everything. Even the plethora of family members betraying him doesn’t seem to affect him outwardly. We learn from him that heroes don’t get upset, they suck it up and go on even if they have just had to kill their brother/father/friend/lover etc., etc., etc. Heroism here is ignoring the bad in order for the greater good and showing emotion is a sign of the weakness. Men don’t cry and heroes don’t regret a thing. Anger and frustration (possibly driven by years of suppressed emotions) seem to be the driving force behind most of Snakes emotional outbursts. The reasoning behind this closed of attitude are plentiful and fully excusable in the context of the story but it still defines the hero as someone who is emotionally detached from almost everything.
#Community
Login to vote this up!