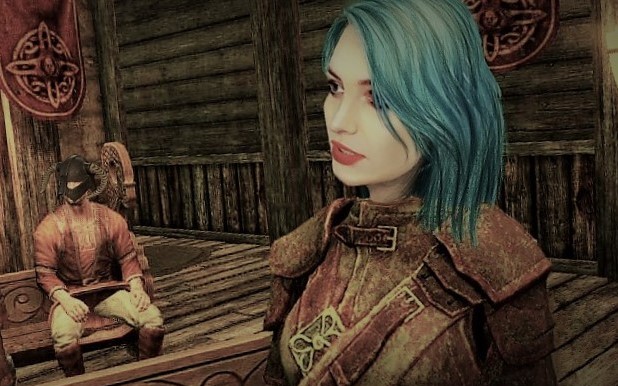 I am going to share the most intimate and personal episode of my Skyrim life with you.

It all started after some old loonies told me I was Dragonborn. As you may have guessed, the first thing I did after discovering my amazing destiny was running through the woods, climbing some mountains, finding new ways of committing suicide (giants; the best way of going), and not following questlines. Then, one day, as I reflected back on these last entertaining but utterly useless weeks of my Nord life, I came to the following conclusion: I may request songs about myself every time I enter a tavern, but that doesn’t mean I have to dedicate my virtual life to slaying dragons and being an inspiration to every Skyrim citizen. It was at this moment, as I was sitting on a lonely, snowy mountain top, that I decided to follow the path of true love…

So I got myself an amulet of Mara (I actually paid for that) and I went to this rather boring town called Whiterun: home to the most indecisive Jarl, and complemented by some of the best views and most affordable housing prices in Skyrim. Weary from traveling and excited about finding true love, I stole all Nazeem’s belongings (what did you say about the cloud district?) and I headed to the Companions. Why to the Companions? Because that’s where the brothers Vilkas and Farkas are, and I decided that one of them would be my groom. Or both as far as I was concerned, but apparently polygamy is not allowed in Skyrim. Just a side note: I like the thought of anyone reading this either thinking I’m really gay or a girl. You pick one ;)

Anyway, I found out that in order to woo the brothers you have to finish the whole Companions-questline, which is way too much to ask for true love. I just went to the tavern instead. People are way less difficult when they’re in taverns. So I go in, I don’t order food or drinks (I never do that), I pay the bard some money to sing my praises and then, in a most regrettable moment of insanity, I put on my freshly purchased Tinder-on-a-cord. As you can expect, the whole room went absolutely crazy now that they knew I was single & ready to mingle…

But then I start talking to Ysolda. I ask her if she likes me (of course she did! I brought her a mammoth tusk. People in Skyrim taverns are easy, told you) and she asks me if I like her, and I decide to see what happens if I say ‘yes’…

“It’s settled then”. Damn. Apparently we’re engaged. I meant as a friend, Ysolda! That’s Skyrim for you. I only said I liked her. Well, that’s the story of how I became an accidental lesbian. 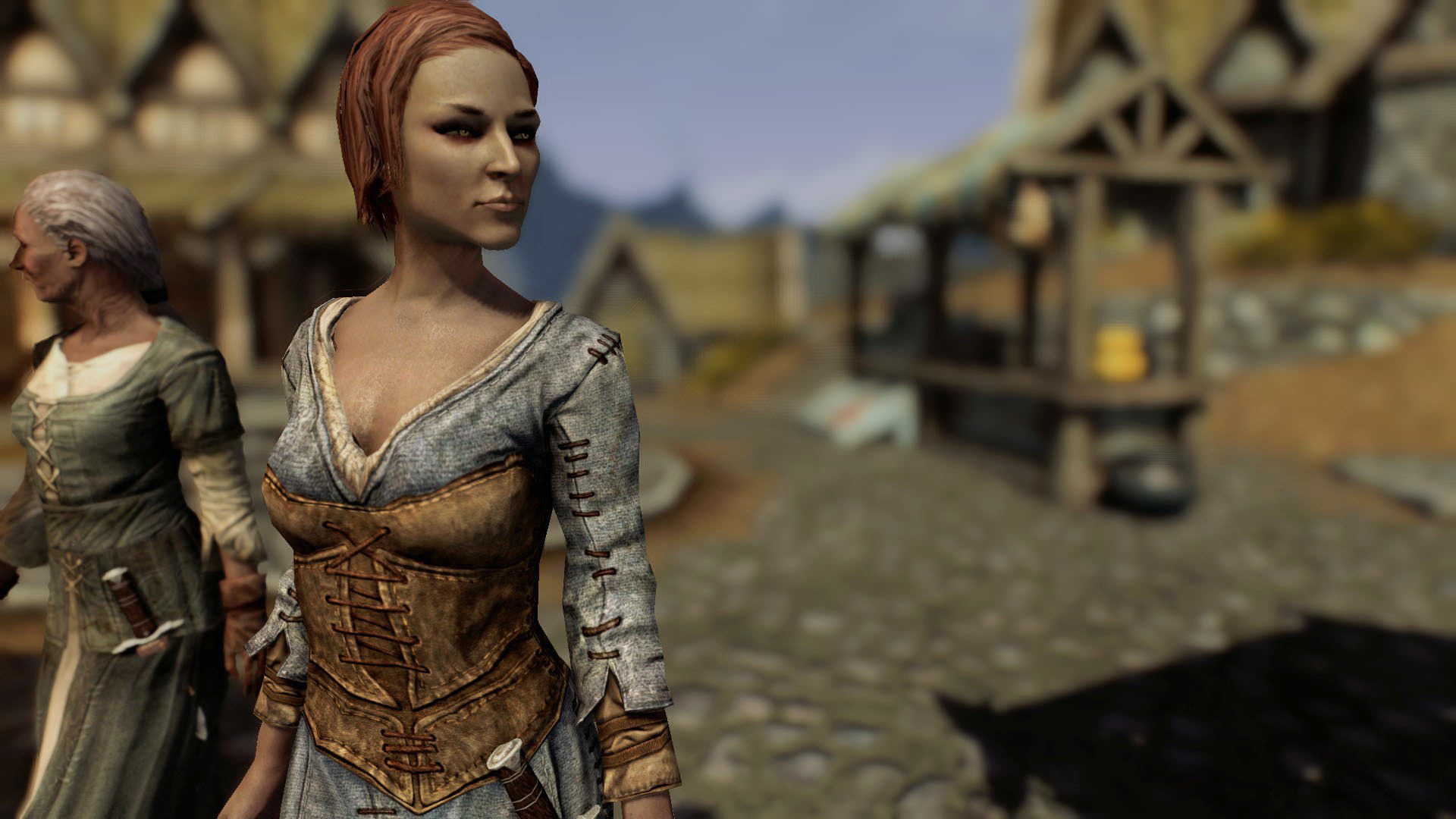 But no harm done, right? I just tell Ysolda that I don’t take marriage and love as lightly as other people in Skyrim and that our sudden engagement of ten seconds ago was all a big misunderstanding.

Nope, turns out you can’t ditch your fiancé unless you arrange your wedding and dump them at the altar in front of all their friends and family. That’s just cruel. So, I decided to spare Ysolda’s feelings and I raised my bow, aimed at her head… -Nope, kidding again. I went with the first option because I have a heart of gold. And I thought this wedding might actually be quite funny.

It was mostly quite awkward, however. Especially because Ysolda kept saying how happy she was and because so many of my buddies had taken the trouble of coming to my almost-wedding (without invitations though, which is kinda weird). The awkwardness reached a new high when Ysolda said her vows and I said “no” and all the guests just stood up and left without a word. We should’ve offered them a drink at the very least. But my freedom was saved, although the priest was angry and Ysolda was sad. She really should have been more grateful that I spared her life. Now every time I see her she tells me how I’ve ruined it. Oh well. 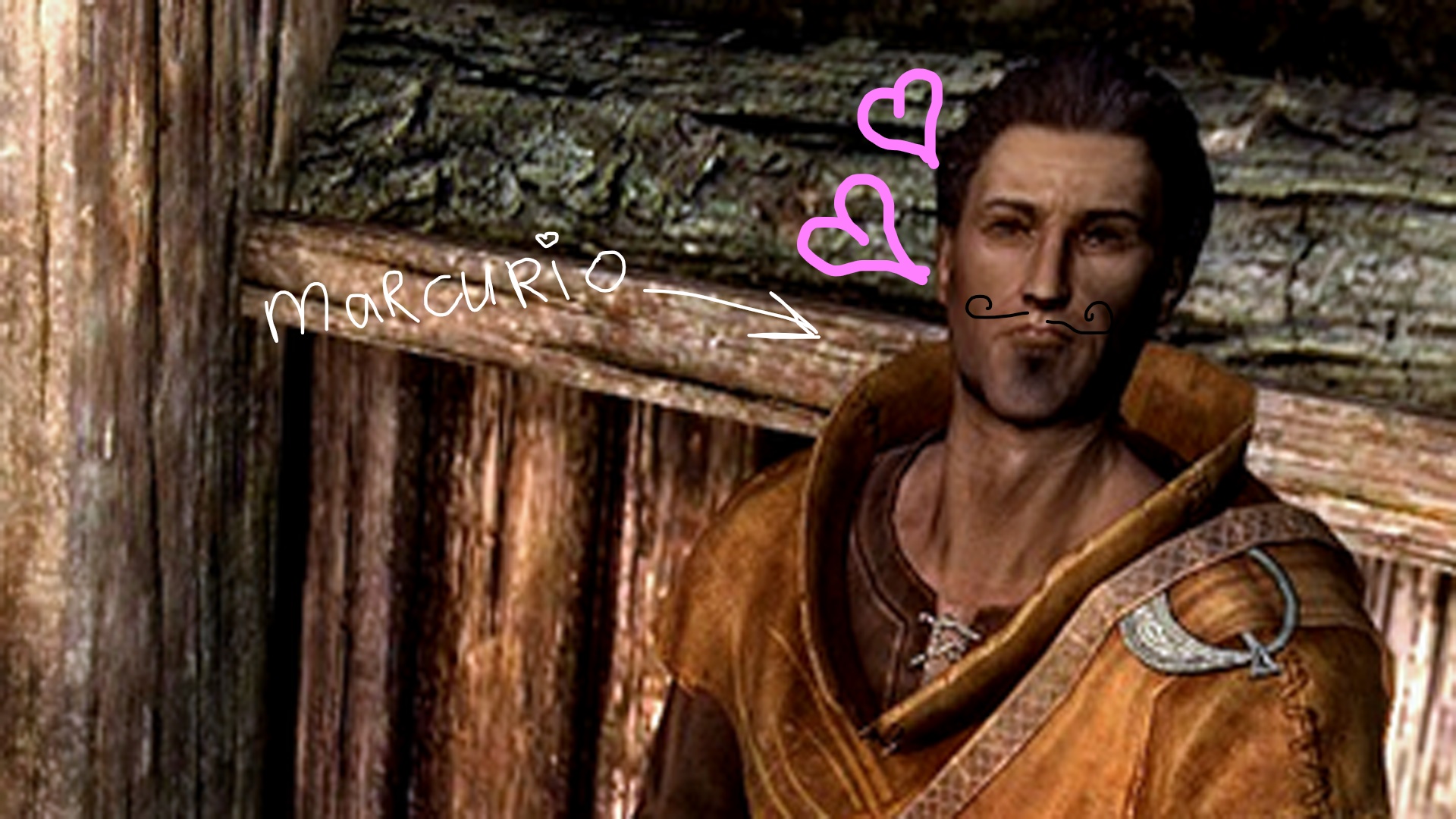 If you, dear person on the internet, have actually read all of the above, you may be wondering: “But is this the end of it?? Did you ever find your true Skyrim love??” Well yes, I did!

After a careful cost-benefit analysis and some quick googling, I went to the tavern in Riften. Yes, taverns again; great places for lonely people! and I bought myself a husband (read: servant. We never even kissed. Honestly, what’s this game rated M for?) for no more than 500 gold. His name is Marcurio. To be honest, the gold was to hire the guy as a sell-sword, but then I married him to get the most value for money and own him for life. That’s how you do it.

Looking back, I’m still content with this purchase. Marcurio really is a very powerful mage. He kills all my enemies for me, which is handy. He also cooks, carries my stuff and pays me 100 gold a day; so it wasn’t long before I got my investment back. Oh, and he’s loyal; doesn’t start nagging about morals if you break into a house and start stealing stuff. I might actually go as far as to conclude that Marcurio was the best thing I ever bought in the entire game. So, here’s some advice for you to conclude this story: don’t talk to people you don’t want to marry. And buy Marcurio. Bye!