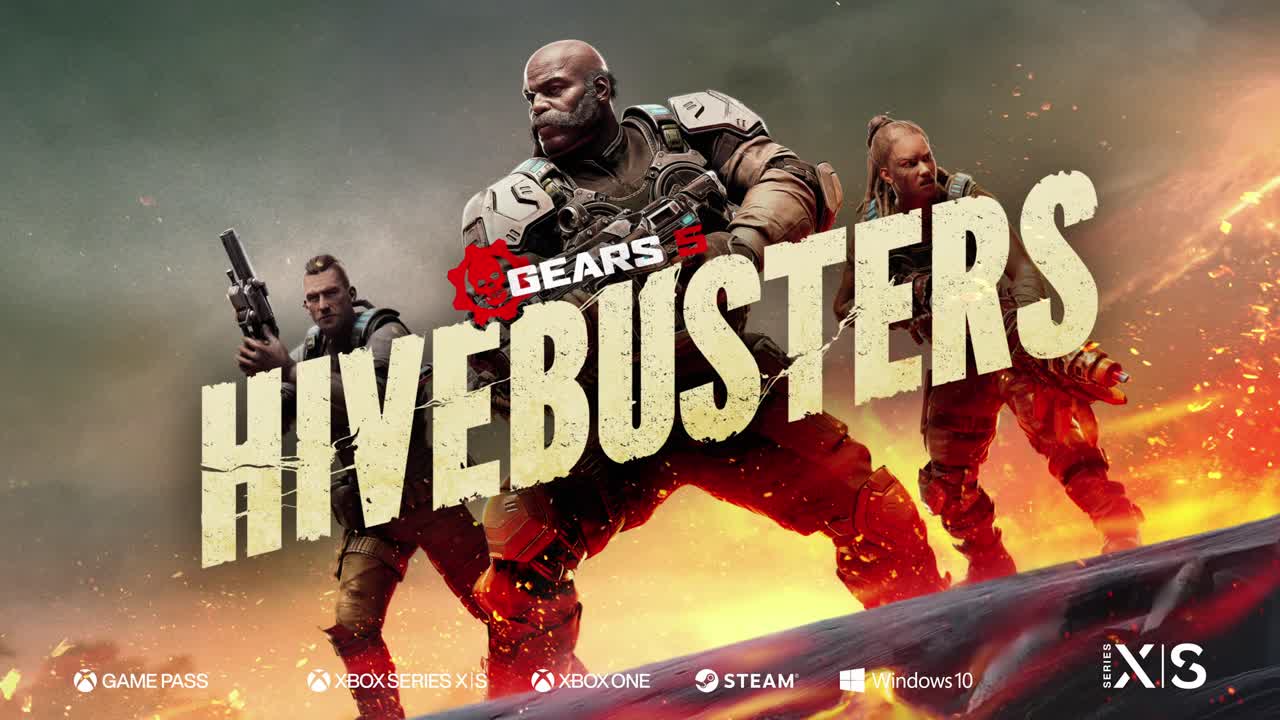 Announced in late October, Hivebusters is a piece of single player DLC that expands on the lore surrounding the trio of characters at the center of Gears 5's Escape mode. It's the classic story of a ragtag group coming together in the face of adversity, overcoming their differences in personality to get the job done and, of course, save the world. In this 3ish hour campaign experience you control "Scorpio Squad" as they take on their first, desperate mission into the swarm's stronghold. For the low price of free for Game Pass Ultimate members, or $19.99 for the unwashed masses, Hivebusters is an interesting throwback to Gears of old, and I think it's pretty fucking cool. 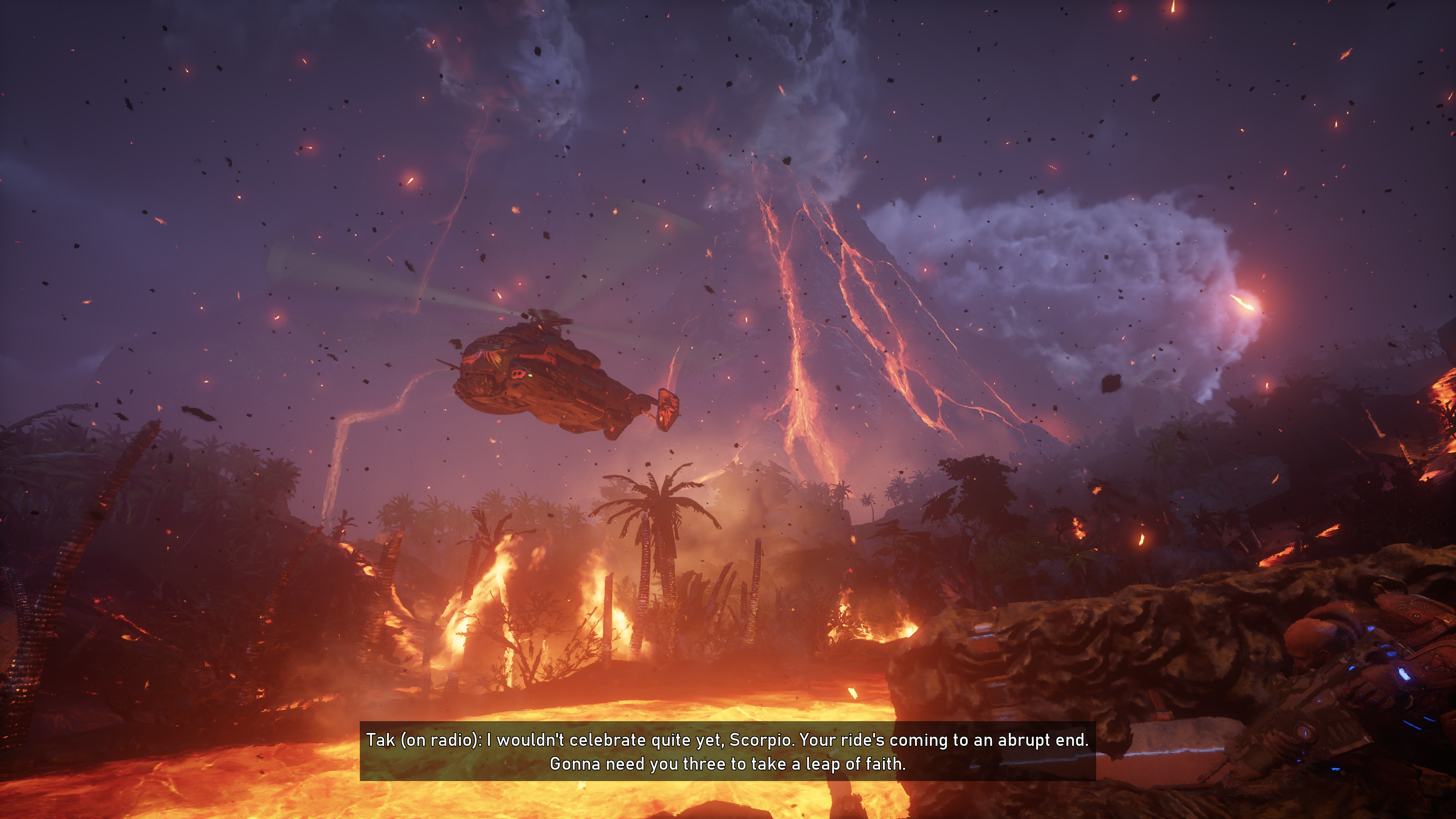 Hivebusters is broken down into 6 chapters, each featuring their own unique set pieces and scenarios to keep things fresh. It all starts with a plane crash, and god is it beautiful. The first thing that really caught my eye when I started playing through this was how amazing everything looked. I've been playing Gears 5 multiplayer on and off since it came out, and I've played quite a few hours of it on the Series X, but this DLC takes it to another level. I almost feel like they chose a primarily tropical setting just so they could show off. There are multiple beaches and waterfalls, active volcanos and underground COG bases, all in stunning 4k. There's one set piece that has you riding on a giant metal vault door through a river of lava that is simply stunning. I'm not the kind of guy who generally cares about the quality of a games graphics, I just know when something looks good, and this DLC looks so damn good. 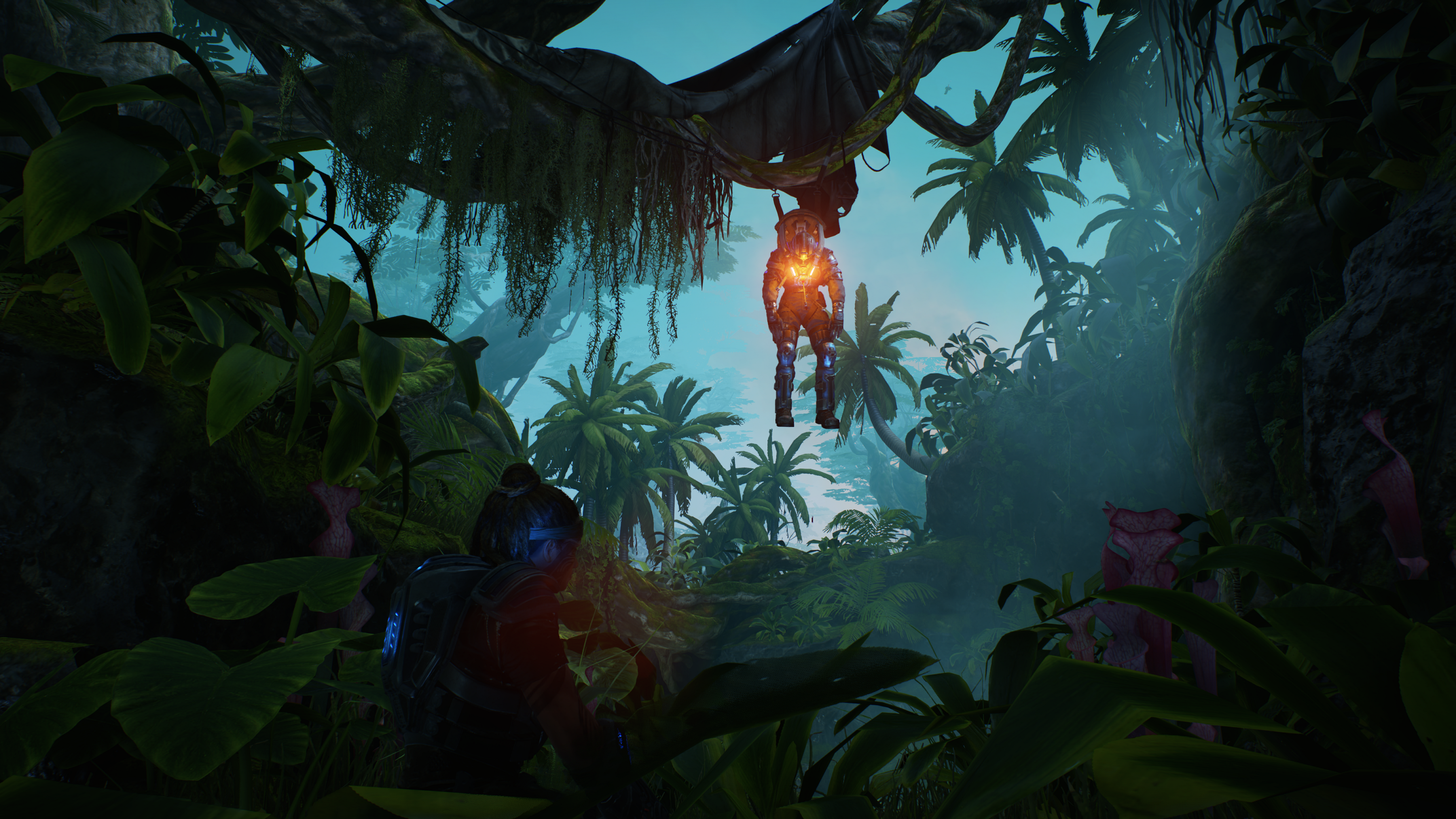 What you do in these beautiful tropical locales is a whole lot of shooting. It's still the same core gameplay that's been refined and polished over almost 15 years of Gears, and it's fantastic. I can't claim to be an expert on the genre, but the 3rd person shooting in Gears games has always felt like it was best of class. The only somewhat new thing added here are ultimate abilities, one for each member of the squad. Keegan gets the ability to deploy an ammo field that restocks the crew, Lahni gets an electric knife melee attack, and Mac can deploy a barrier that Scorpio Squad can shoot through. The reason I say somewhat new is because these abilities and more have been available for use in Horde and Escape mode since the core games release. In fact, there are several abilities you can use in those modes that are much more interesting and varied than the three they chose for this campaign. It's a bit disappointing that you can't use these other abilities here. Maybe it's a balance thing, but I'd love an update that adds a new game plus mode with more options. 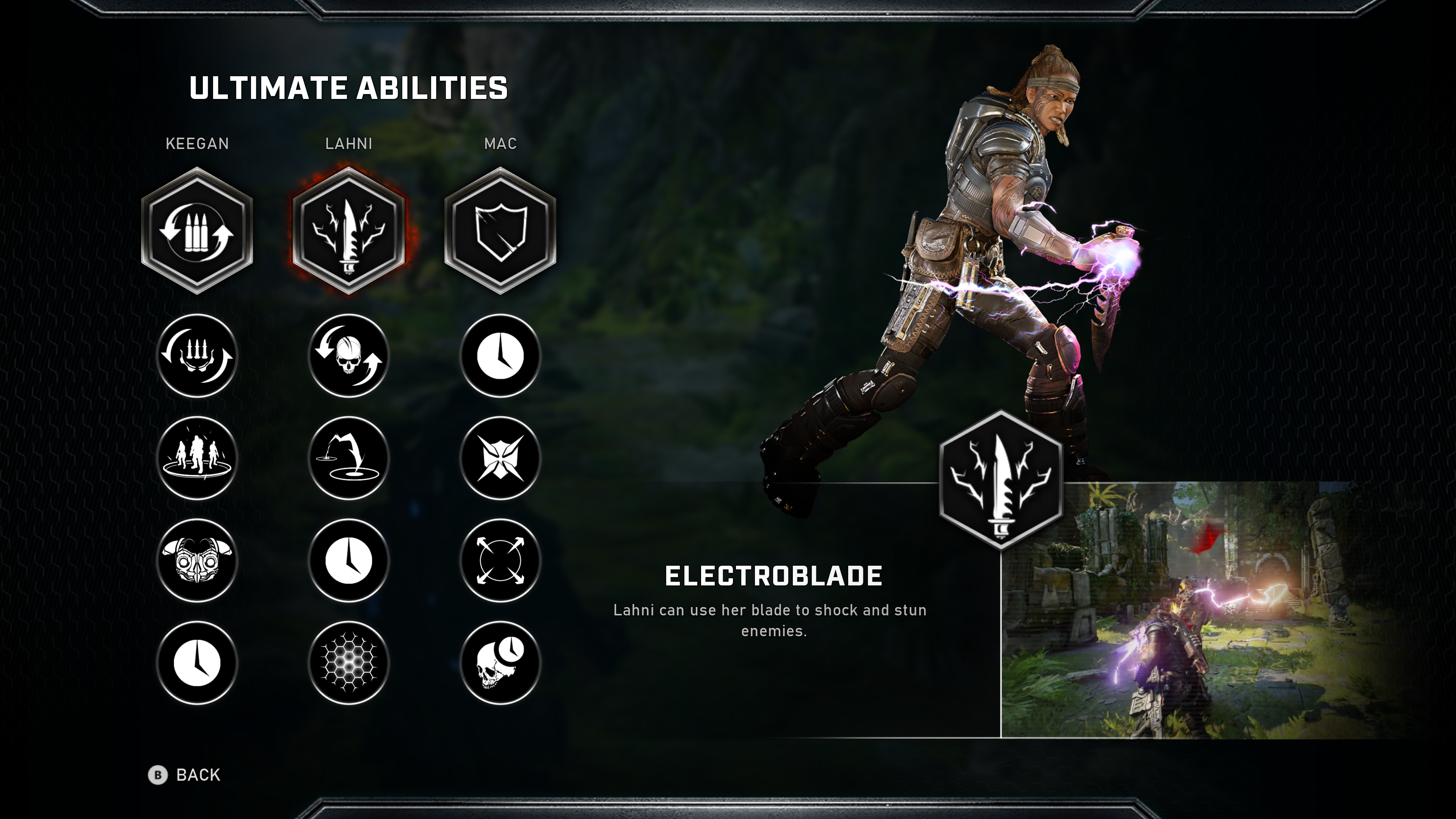 The brief run time of this DLC is one of it's best aspects. It's short and sweet. The action flows well from set piece to set piece, never lingering too long in one place. From a strictly gameplay standpoint the pacing is excellent, the problem lies with the story it's trying to tell. It's an accelerated run through the origin of Scorpio Squad, but it's a bit too accelerated for my tastes. It does a great job of setting up the main trio's personalities. You have the disgruntled veteran, the solider with a secret, and the outsider looking for vengeance. They're walking clichés, but they're well done. Even the supporting characters are slotted into the story in a satisfying way. I don't want to spoil anything directly, but I'm sure anyone who plays this DLC, or just watches the trailer, will know exactly where it's going from frame one. There's nothing surprising about it, and that's fine, it just feels like they make the leap from where they start to where they want to go way too fast. 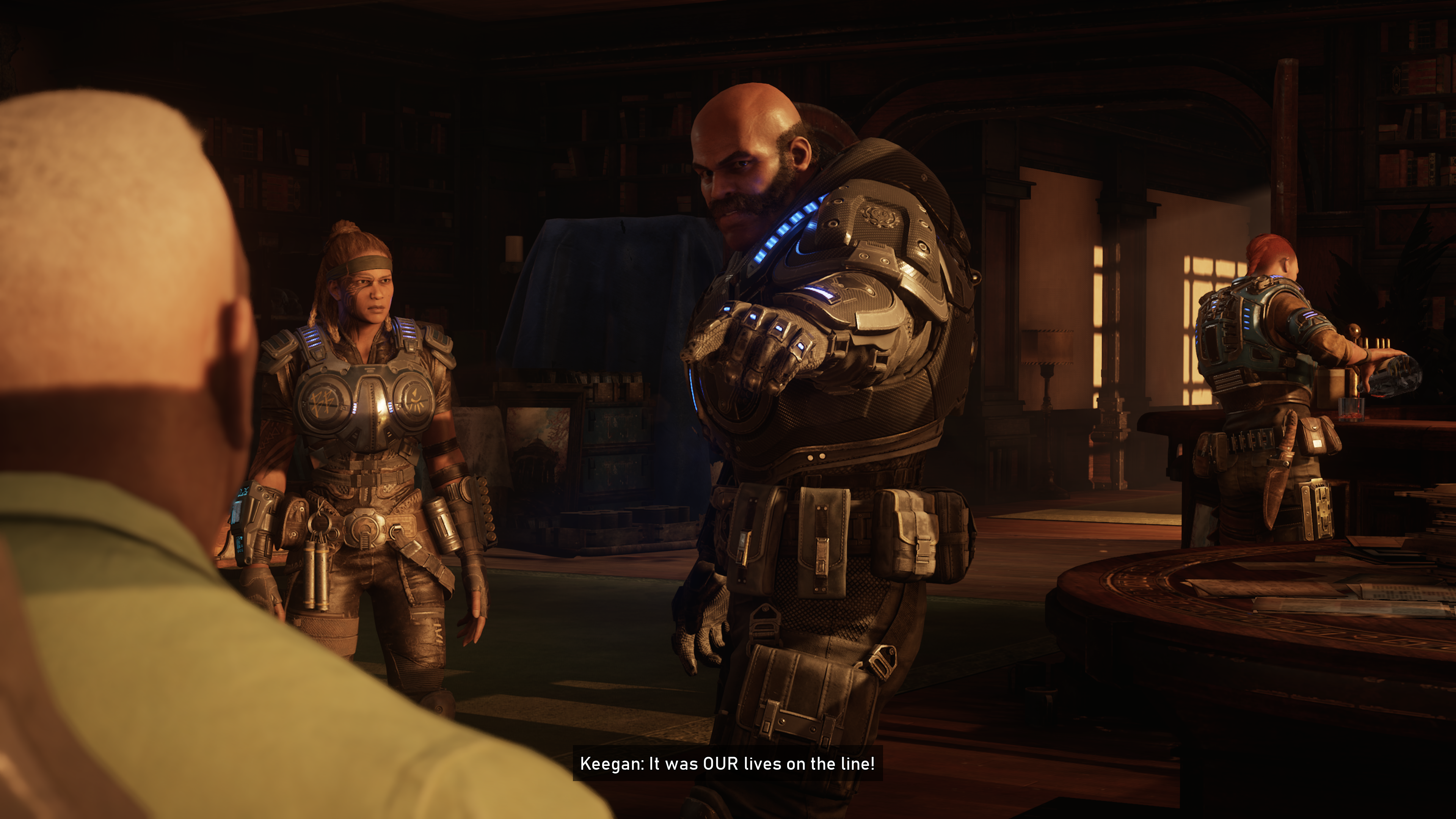 Coming off the experimental, pseudo-open world formula employed in the Gears 5 campaign, Hivebusters is a refreshing throwback to a simpler time. It's pure meat and potatoes, backed up by the extremely polished shooting the Gears franchise is known for. It still feels satisfying hitting a headshot with the sniper, gibbing a guy with the shotgun, or running up to an enemy for a classic execution. There's nothing here that answers any lingering questions about the future of the Gears universe. You could easily skip this and (presumably) jump into the next Gears game without missing a beat. It's enjoyable fluff, and sometimes that's all you really need.