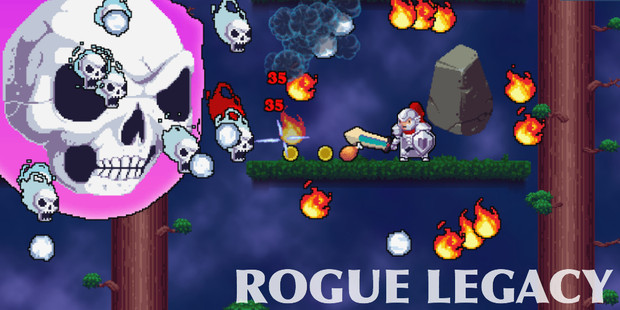 >> Games like Spelunky and The Binding of Isaac have already shown me how much roguelike elements can breath new life into well-worn concepts, so when I heard the name Rogue Legacy, I knew I was in for a treat. In spirit, Rogue Legacy is like Castlevania. Players choose from a pool of playable characters with different classes, spells and genetic quirks, and must traverse a dungeon full of evil knights, wizards and undead horrors in their quest for glory. Not only is the dungeon layout completely different every time you embark on a new quest, but things like items and enemies are randomized as well, meaning you never quite know what will be behind the next door. It�s an exciting but sometimes brutal experience that encourages experimentation and vigilance.

Death is very common in Rogue Legacy, especially when you�re first starting out, but the upgrade system in the game ensures that no run is a total loss. Any gold you collect is passed down to your next of kin and can be used to purchase skill upgrades (which affect all future characters), better classes, and even new equipment. Slowly but surely, you�ll increase your players health, magic and attack power, which increases your chance of survival, which lets you collect more gold, which of course allows you to purchase more upgrades. It�s a pretty satisfying gameplay loop that cuts down on a lot of the frustrations of permadeath, but it�s not without some problems of it�s own. These become less of an issue the longer you play, but early on it can feel like you�re taking baby steps towards an unreachable goal.

There were a few other niggling issues that became increasingly more annoying the longer I played. Being forced to re-equip every single new character with armor and runes to suit their class before each run was a chore. I would have loved the option to save a loadout for each class. I also think they could have added more game-changing genetic quirks to the mix. Baldness and IBS are funny to see the first time around, but since they don�t have any real affect on gameplay, they quickly become uninteresting. And since there�s a fairly small pool of quirks to begin with, they show up pretty frequently. I�m having a lot of fun with Rogue Legacy (currently playing NG++++++++) but I think I�m more excited about how much further they could take this concept with a sequel.

PLAY IT if you�re looking for something to satisfy your hunger for roguelikes while you wait for The Binding of Isaac: Rebirth to drop and make all your dreams come true.

AVOID IT if you don�t have the patience for games that force you to fail repeatedly before they get �fun�.

Thanks for reading, guys. I wish I had the patience to write a better outro but struggling with the Dtoid blog editor has nearly ruined my weekend. See ya next time!
Login to vote this up!