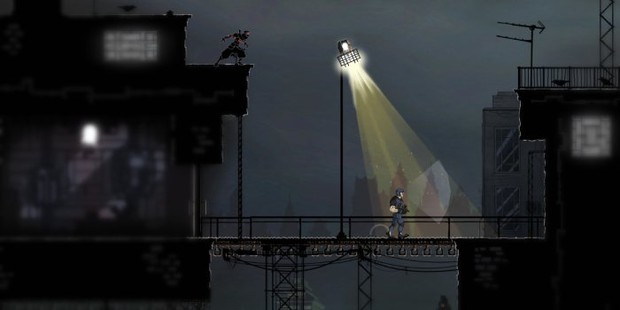 >> Stealth games, by and large, only appeal to a specific type of player; one that enjoys the hunt more than the kill. While lurking in the shadows, he carefully scans the environment for possible environmental hazards and marks targets in optimal assassination order. Once the plan is set, his mind clears as he waits for the perfect moment to strike. There�s nothing to fear as the outcome of each careful step has already played out in his mind. The silence that follows the last victim�s muffled gasp is the assassin�s ultimate reward. He disappears once again into the shadows, leaving not a trace of his existence.

Mark of the Ninja understands this perfectly. Every room, every enemy and every weapon are an eager assassin�s wet dream. Take out a spotlight with a kunai and anyone within range of the sound will come to investigate. Crawl along the ceiling like a spider as they make their rounds. Toss a dead body into their line of sight and watch as they scream in terror, killing their allies as they fire blindly into the darkness. Though kills often end with the sharp end of a sword emerging from a soldier�s warm chest cavity, the moments leading up to it have the potential for some seriously satisfying foreplay. The stages in Mark of the Ninja are fairly complex too, offering many alternate paths and allowing for vastly different strategies. As an optional challenge, it�s even possible to complete them without killing anyone and/or avoiding detection altogether.

What makes the overall gameplay so interesting and exciting is the way Mark of the Ninja handles sight. Not only is your enemy�s vision limited to their line of sight, but so is yours. Being a 2D game, there are often rooms that are technically visible to you as the player, but are blurred out because your character cannot physically see them. While hiding in a vent, you�ll have to carefully peek out in order to see your surroundings. In order to see if the roof is clear, you�ll have to climb up the wall and peer over the edge. It�s a brilliant way to handle sight and one that I hope other games borrow. Sound is handled in an equally elegant way, ensuring that the player is constantly aware of who can hear what and ultimately use that to their sneaky advantage.

BUY IT if you relish the calm, peaceful moments just before you pounce on some unsuspecting goon and fillet his esophagus like a trout.

AVOID IT if you haven�t enjoyed hiding in dark places since that one time you ducked into the closet while your parents �wrestled�.

That's all I've got. I messed with some of the formatting this time and made a new header. What do you think? As always, thanks for reading and I'll see you next time!
Login to vote this up!