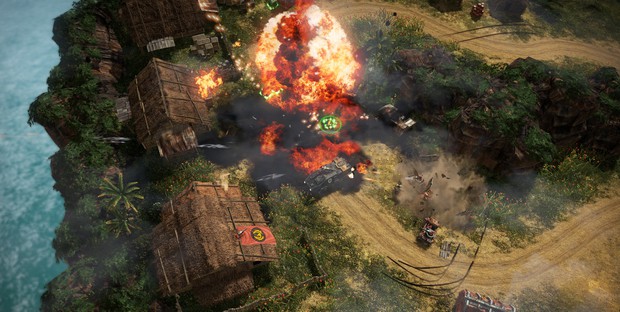 >> Just Cause 2 was one of my favorite games of last year. I loved the huge, detailed world and it�s unapologetic focus on crazy action and fun. When I loaded up the Renegade Ops demo, I immediately noticed a similarity. After a little research, I came to find that these two games are actually made by the same studio and share the same engine. That bit of knowledge and the strength of the demo were enough to solidify my purchase. No regrets here.

In terms of gameplay and controls, Renegade Ops keeps it simple. The left stick controls smushing enemy soldiers, doing donuts and ramping off cliffs. The right stick controls flesh perforation, shrapnel distribution and general destruction. That�s basically all you need to know. Each of the 4 playable characters has a unique vehicle with it�s own special weapon and upgrade tree but overall they�re pretty similar. Oh, and the A button is turbo. That�s important because you can�t have an awesome vehicle based shooter without the option to shoot flames out of your ass and go faster.

At it�s core, Renegade Ops is a top down dual-stick shooter sporting some surprisingly gorgeous tropical and desert locales. I�m not going to mince words here: the game is pretty fucking badass. It features everything you love from those terrible 80�s action movies - tons of explosions, cheesy one-liners, enough bullets to choke a volcano and somehow even more explosions. The story plays out as comic strip panels but I�ll admit that I�m not paying a lot of attention. I think I rescued the President of Africa at one point and I�m pretty sure the villain�s name is �Inferno�. Riveting stuff, I know. On a side note, I want to apologize in advance to any innocent civilians walking down the road or in any of the buildings I come across because I blow EVERYTHING up without remorse.

BUY IT if you're the type of renegade that hijacks nukes and asks questions later.

AVOID IT if you�ve been searching for a game that questions the morality of war by highlighting the horrific consequences of collateral damage.

That's it for issue #007! If you missed any of the previous issues you can find links to them in my sidebar, underneath the pangolin. As always, comments and suggestions are much appreciated. Thanks for reading and I'll see you guys next issue!