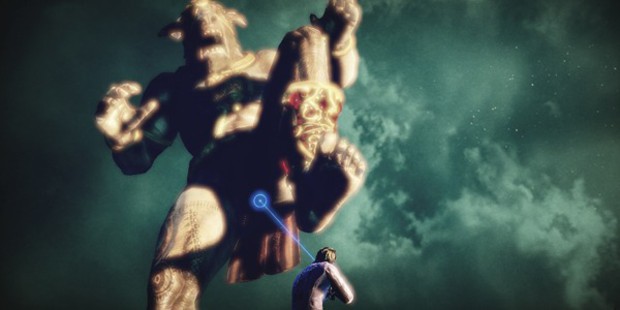 Shadows of the Damned
Xbox 360

>> Fact: Suda51 will never let you forget that you�re playing one of his games. Love him or hate him, his distinctly bizarre style permeates absolutely every aspect of his projects. Take Shadows of the Damned for example. If you were to strip away all the crazy, it�s a fairly formulaic third person shooter with some light horror elements. You blast your way through enemies and find keys to unlock doors. Along the way, there are shops from which you can purchase weapon and health upgrades. After you defeat the boss, they drop an item that will help power you up for your next battle. The gameplay is solid and plays is similar to Dead Space and the recent entries of the Resident Evil series. The basics of the story tread familiar territory as well. The hero�s girlfriend is captured by an evil dude so he and his trusty sidekick follow them back to the evil dude�s lair in order to save her. But describing Shadows of the Damned in such a way does it absolutely no justice because you�d be ignoring all the best parts. The fucking insane parts.

Allow me to share a few examples with you. Locked doors are signified by the heads of hungry infants which demand that you stuff brains, eyes or strawberries into their mouths in order to proceed. Your weapons fire bones, skulls and teeth instead of bullets. Demon pubes are a common obstruction. Your health bar is replenished by chugging bottles of tequila and absinthe. A half demon named Christopher, who runs the in-game shop, eats your money and vomits your purchases onto the ground. At times you wield a gun called the Big Boner, which is acquired by calling a phone sex line and holding your sidekick Johnson up to the reciever. There is a boss that screams nothing but �FUCK YOU!!�. You just can�t play this game without laughing out loud or being completely disgusted. Much to my delight, both Shinji Mikami (the creator of Resident Evil) and Akira Yamaoka (the sound designer for the Silent Hill series) leant their unique talents to Shadows of the Damned. Their contributions went a long way in making what would have already been a great game into something truly special.

BUY IT if having macabre children's stories read to you by a barely literate Mexican demon slayer was already on your to-do list.

AVOID IT if you don't need a video game to give you a reason to start swinging around your Big Boner.

That's all for issue number five! As always, thanks for taking the time to read this and for any feedback you have for me. Try to enjoy this unbearable summer and I'll see you all next time!
#ShareonCommunityBlogs
Login to vote this up!