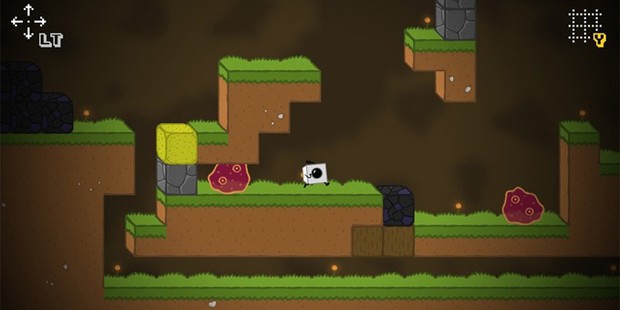 >> Amidst the avalanche of massage programs and fart games in the XBL Indie Games marketplace lies a real gem. Blocks That Matter is a surprisingly polished puzzle-platformer in which you play a little robot trying to save his creators. Seemingly inspired by ideas in Minecraft, you destroy blocks made of various materials in order to traverse the levels. These blocks you eliminate are stored and used to build platforms, walls and bridges, which you’ll need to get around. The catch is you need at least 4 blocks to build something. This forces you to build using only those 7 classic shapes we all know and love from Tetris. Also, anything you build has to branch off of something that already exists, meaning you can’t necessarily build a floating platform without some tricky planning.

The materials the blocks are made of become much more important as you get to the later stages of the game. Your character’s drill can only handle plain rock at first, but can be upgraded at different points in the story. Materials that are initially impassable later become valuable tools for creation. The developer used this to their advantage when they went about placing the collectible chests hidden throughout the 50 levels. Inside the chests you’ll find references to 50 other block-centric games. These range from classics like Arkanoid and Super Mario Bros to more recent games like VVVVVV and the soon to be released Battle Block Theater. Collecting them all gives you a great reason to go back and replay some of the previous levels.

BUY IT if $3 sounds like a fair asking price for hours upon hours of head-scratching good times.

AVOID IT if $3 sounds like a FUCKING RIP-OFF for hours upon hours of STUPID DUMB SHIT.

That's it folks! Again, sorry it took so long to get this issue out. I appreciate you taking time out of your day to check this out. See you next issue!
Login to vote this up!