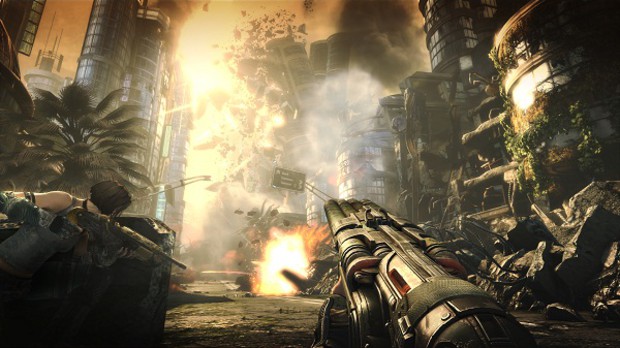 >> It's no secret that I love Bulletstorm. I've had it perched at the top of my most wanted list since I got a small taste of it last fall. It was a largely unknown game but I really wanted it to do well so I kept reminding all my friends about it. It can best be described as an FPS playground and is a refreshing take on a genre currently overpopulated by Call of Duty clones. Armed with some familiar weaponry, a handy leash and a boot, you're free to toss enemies to and fro, killing them in the most creative way possible. You're encouraged to use the environment and crazy secondary-fire modes too to maximize your points and get special bonuses. These 'Skillshot' points are used at various checkpoints throughout the game (called Drop Kits) to buy ammo and upgrade your arsenal. The existence of the Drop Kits might have seemed weird if they weren't woven into the story itself.

Yeah, story! If you thought this game would boil down to men yelling various made-up curse words at each other you'd only be half right. The script was penned by Rick Remender, better known for his work on the lovely Fear Agent comic, and Bulletstorm shares more than a few similarities with it. You play a bounty hunter named Grayson Hunt who is on a revenge mission aided by his half-cyborg buddy Ishi. You crash land on a destroyed resort planet overrun by cannibals and freaks who serve as the paint for your repeated artistic smiting. If the screenshots haven't made it clear enough, Bulletstorm is an incredibly beautiful game sporting some really clever level design. If you were turned off by the demo's 'score attack' set-up, I encourage you to play the single-player campaign. It may surprise you.

BUY IT if you feel the current FPS scene could use a collective shot of creativity, right in the ass.

AVOID IT if the phrase "Butter-dick Jones and his Wonderful Asshole Machine" makes you physically ill or angry for whatever reason.

That's all folks! Feel free to let me know what you thought about some of these games in the comments. After all, these are just the thoughts of one man. I will have a 3DS in my possession by the time my next issue comes out and I look forward to testing out some of the launch titles. It's been a while since I've gotten my hands on some fresh new hardware and I am pumped! Thanks for reading!
Login to vote this up!