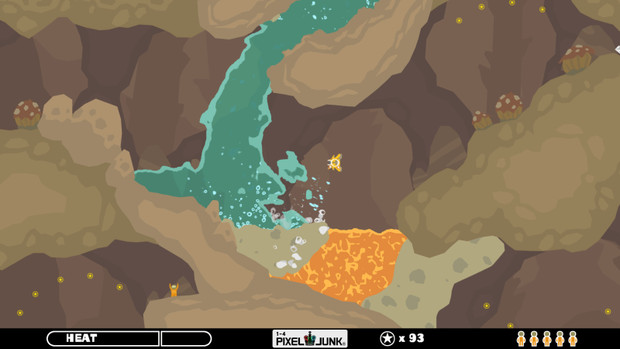 >> As silly as it may seem, PixelJunk Shooter was a big reason I got myself a PS3. Playing as a rescue ship, you are tasked with delving into a dangerous cavern to save stranded scientists. What you find, as you go deeper and deeper, are various creatures and defense systems that will do whatever they can to keep you from completing your objective -- typical dual-stick shooter stuff. Keeping your ship cool replaces a life bar so environmental hazards are often more dangerous than the enemies that confront you. It also has a co-op mode that I've yet to try for lack of a second controller.

Things get interesting when they introduce the various liquids that will become both your ally and your enemy as you progress. Initially, you only have to deal with water and lava. Water can cool your ship and is used to solidify pools of lava. The lava, on the other hand, will kill you in an instant but has some interesting uses of it's own. Eventually ice, toxic fumes, and a strange magnetic liquid (or ferrofluid) are introduced, which pose new threats and opportunities. Though it's on the short side, the quality of the content more than makes up for it. I'm (literally) frothing at the mouth for PixelJunk Shooter 2, which should release later this year. Yes please!

BUY IT if seeing simulated chemical reactions and liquid physics cause blood to flow to your happy parts.

AVOID IT if the lack of difficulty or graphical detail can sour what would normally be an awe-inspiring experience.

That's it for the first issue of the Buy it/Avoid it Report in 2011! I was encouraged by your kind words last year and I have decided to put these out more frequently. It won't necessarily follow a strict time schedule but more of one based on quantity. Once I play around 5-7 new games, I'll throw out another issue. These are really fun to write and I appreciate you taking the time to check them out! See you next time.
Login to vote this up!