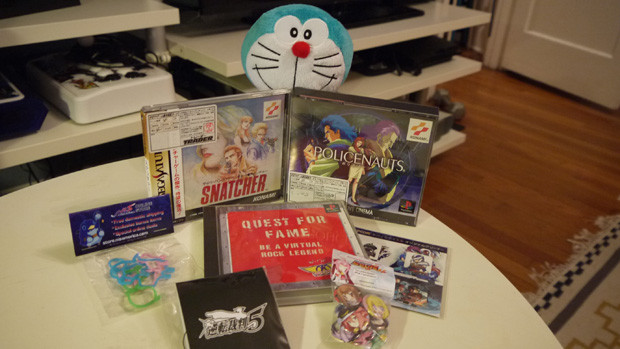 Hey gang. I did make it home from Tokyo and I'd apologize for not having done more posts while there but, truth be told, there wasn't much more to tell. The rest of the week was dominated by work-related things, with the exception of the final day, which saw us going to Rappongi in the morning and Akihabara in the afternoon. Unfortunately, it rained the entire last day of my trip and I was unable to get more than a few (crappy) photos.

But, what with Tokyo being one of those legendary places to bring home crap from, I thought I'd toss a quick post up on what I picked up on the trip. See, while there's a ton of things to buy (ESPECIALLY in Akihabara), there are a few things which kept me from purchasing more. First is the space concern. I bought a very small carry-on and a smaller shoulder bag and that was it for the trip. This was intentional, as a roadblock to spending crazy amounts of money but also for ease of passage through customs and security in various airports.

"Games are small," you say. "Surely you could have bought more than four of them on your entire trip!" Yes, you're right, but I also have an astounding capacity to talk myself out of making a purchase, no matter how small. I found a copy of Intelligent Qube for 100 yen (~$1.25), which seems like an asinine thing not to buy. But I didn't know what I'd really do with it sitting in my apartment, as I already have the North American release, so I let it go.

The things I saw, though! A Sega Saturn for 1000 yen. Piles of Famicoms and Super Famicoms stacked taller than me. I think it was Super Potato where I spotted a PlayStation 2 debug unit. Just insane.

Anyway, I stuck to simple choices. I went to Japan wanting to find a copy of Red Seeds Profile, the original PS3 release of Deadly Premonition and, with the help of Dale North, I did manage to succeed in that. Then, while browsing the fourth (!) floor of the same shop, I spotted Policenauts and couldn't resist it.

That's when I thought to look for Snatcher. They had three copies, all dirt cheap. I picked up the one in best condition and whistled my way up to the register. A pretty good score, if I say so myself.
Login to vote this up!