My dogs, they are barking. While Tokyo Game Show doesn't start until later in the week, we wanted to get here a little bit early so we'd have a day to just bum around and acclimate ourselves. After waking up and enjoying a breakfast of fine, packaged foods from the local Family Mart (popular chain of convenience stores). I had a hot dog which was...well, it was a hot dog. I don't know how enthusiastic one can really get about that. Dale made it a point to mention that the hot dogs here are more like proper sausages and, yeah, it didn't taste like the tube of fat and offal I usually get at a gas station, but it was still a hot dog. 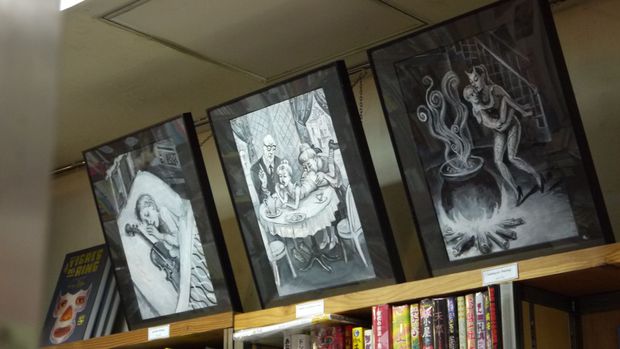 I'm on a pretty tight budget, so I'm resisting the urge to buy all kinds of crap all the time. In one shop, we found three Super Famicom copies of Chrono Trigger, in box, for less than 1000 yen each. I don't even particularly like Chrono Trigger (always tune out around the post-apocalypse) and would have even less desire to try and struggle through it in Japanese but, at that price, I felt like a fool passing it up. Likewise, I skipped out on a copy of Intelligent Qube at 105 yen (already have the NA version). But then I spotted Quest for Fame, an adventure game starring Aerosmith and I simply couldn't resist, mostly because I picked it up for roughly a dollar.

What I did not find, the one thing I'm actively seeking on this trip, is a copy of Red Seeds Profile, the Japanese release of Deadly Premonition. That's the one thing I want to bring home, but not a single store we've visited so far has turned up one. The search continues.

I took a bunch of pictures and they probably tell the story better than I can at this point. I'm fairly exhausted and we have an early day ahead of us. I'm off to shower and bed, but I'll try to get another update in here before things get too crazy at the show. In the meantime, enjoy the gallery.
#ShareonCommunityBlogs
Login to vote this up!