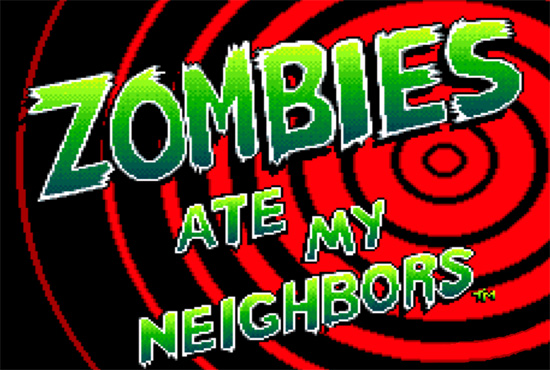 As you can no doubt see by my blog header, I'm a big fan of zombies. There's been a resurgence of zombie-related media in recent years. From Max Brooks' excellent books (Zombie Survival Guide and World War Z), to a glut of films it seems zombies are on everyone's minds. In our favorite hobby, we have the Resident Evil saga, Dead Rising and many of us are looking forward to Left 4 Dead.

In the early nineties, we weren't so fortunate. A dry spell was upon zombie-lovers everywhere. Sure, we had Peter Jackson's classic Braindead (Dead-Alive in the US, and who the hell would have thought he'd be the right choice for Lord of the Rings after that), but there wasn't much else of quality. The remake of Night of the Living Dead into color? No thanks. Return of the Living Dead 3? Well, alright, I have a soft spot for a hot, undead chick piercing herself to sate her lust for human flesh but the movie sucks.

Then comes Lucasarts to the rescue with Zombies Ate My Neighbors on Super Nintendo and Sega Genesis. Less about zombies than the title suggests, this game is a love letter to the B-movie horror genre and incorporates practically evey cliche found in low-budget films. Any port in a storm, friends. 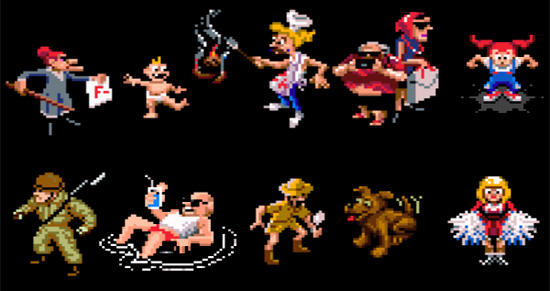 The retarded victims you're forced to rescue are hilariously ignorant of their predicament.


You play as Zeke or Julia and race through nearly fifty levels, attempting to reach your neighbors and save them before horrific monsters can kill them. Assisting you in this is an arsenal of makeshift weaponry scattered throughout the game, including the trusty water gun you start the game with, dishes, tomatoes and Pandora's Box. To help you find survivors, there is a radar which they'll appear on when you get close enough to them. Failing to keep at least one victim alive results in Game Over. 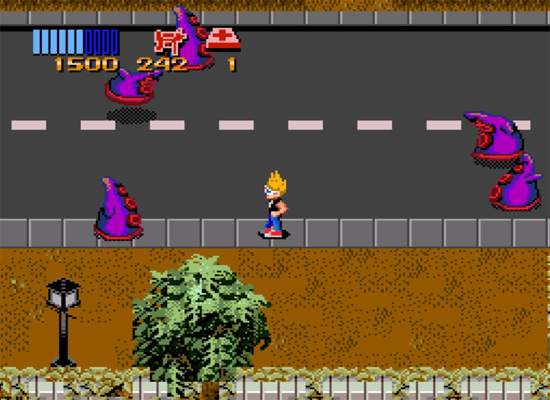 Purple Tentacle (from Day of the Tentacle) makes an appearance in a hidden bonus level.


The monsters are just as varied as the weapons you use to obliterate them. Chansaw-weilding maniacs, martians lifted directly from Attack From Mars!, doppleganging pod people and blobs run rampant through the city. They're designed so that killing them can be clever. Sure, a bazooka will kill just about anything in a hit or two, but why not throw some silverware at that werewolf and watch how quickly they fall.

One of the major challenges in playing this game comes from item conservation. Every level has doors, behind which could lie more equipment or cash for bonus points. Some will also have survivors that will need to be picked up in rooms. But there's a limited number of keys available and you often must weigh whether picking up that potion is going to be worth it in the long run. 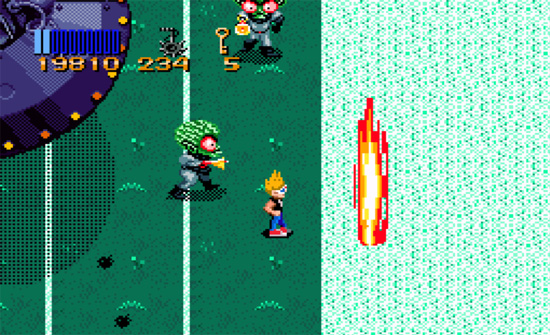 
Zombies Ate My Neighbors can be played single-player, but it's really designed to be a cooperative experience. The only problem is that it doesn't feature any sort of split-screen effect, allowing players to split up to more effectively reach survivors. It's not a game-ruining flaw but something that really should have been supplied. 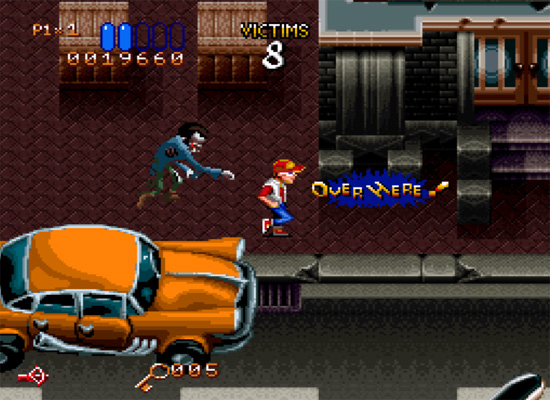 
Two years after the release of Zombies Ate My Neighbors, LucasArts returned with a sequel, Ghoul Patrol. Sporting a graphical update, along with the ability for characters to jump and dash, this follow-up manages to be an undeniable failure. Why? Because it tries too hard. 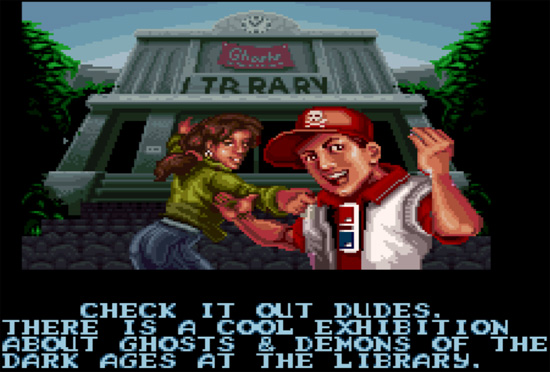 
One of the best aspects of Zombies Ate My Neighbors was that you simply couldn't take it seriously. The victims were retarded caricatures of suburbanites, the monsters goofy (albeit deadly) threats. Ghoul Patrol utterly lacks the humor which made ZAMN so appealing. And they actually attempted to actually tie the concept to a story that's not only an abomination but a completely unnecessary one.

There's also considerably less game in Ghoul Patrol. It lasts for a mere sixteen levels and is extremely linear in nature (you'll do four levels in one area, four in the next, etc.). No more hopping around from supermarkets to pyramids with no idea what might lie around the next bend. And instead of my beloved aliens and hatchet kids, the roster of enemies is reduced to just spooks and demons. And the incredibly useful radar is gone, replaced with annoying text that flies at your character from the direction people are hiding. The sequel just sucks.

Zombies Ate My Neighbors is a unique title with a lot of replayability, particularly with a buddy. It deserves to be played if you haven't yet had the opportunity. Ghoul Patrol, on the other hand, is only worth trying if you've never played its predecessor.

Final Verdict: Brilliant game that stands against the test of time. It's just too bad they felt the need to try for a second round.