When I was but a wee lad, I read Mad Magazine almost religiously. Too young to realize that each issue was essentially the same as all the rest, I ate that shit up. From the film parodies to the Usual Gang of Idiots and all the way to the Fold-In, it was easily my favorite periodical for the nearly ten years which I subscribed. The greatest of all contributions to society made by Mad (okay, with the possible exception of the strides for first amendment rights) was Spy vs. Spy.

So, you can imagine what the video game was to me. The premise plays out just like the comics. Trapped in an embassy with a time bomb strapped on, you play as either the white or black spy and compete to be the one who survives. In order to make your escape, you must acquire five items: An attache case, a secret dossier, passport, money and the key to the airfield. These items are hidden throughout the embassy in bookshelves, desks, inside televisions and behind paintings.

There is, of course, only one set of items, so you'll be in constant conflict with the opposing spy. In addition, you can only carry one item at a time but the attache case can contain all the rest, which keeps things reasonably balanced right up until the frantic end of a round. 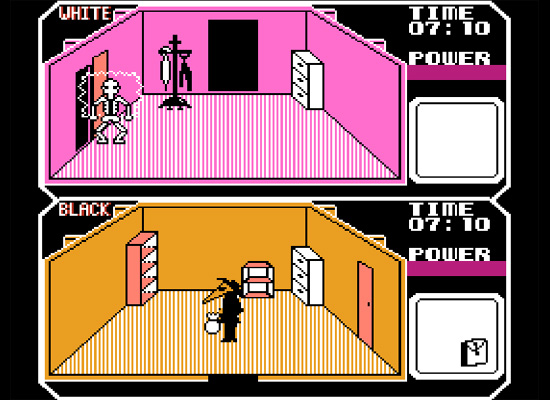 Each spy is armed with a dagger for when they come in direct contact with each other, but that's not the only trick up their sleeves. An arsenal of nefarious traps are also available including bombs, springs and a bucket filled with water (for electrocution). Some traps can only be placed on certain fixtures within the embassy and all but one (which is easily escapable already) have a way to defuse them with items found in the embassy. When one spy is killed by a trap, the other has to stop whatever they're doing and giggle. It's the little things that bring me joy, apparently, because that never gets old.

Keeping things frantic is the time limit. The amount of time you get is based on the size of the level you're playing on and can range from five to twenty minutes. As you get killed, the timer will shave about thirty seconds off your remaining time and make you sit for another agonizing few seconds where you can do nothing but watch you life tick away (and keep an eye on your opponent).

I played this originally on the Commodore 64, but a port for the NES was made in 1988 and that's the version I played for the column, not wanting to go through the hassle of hooking my C64 up. This was probably a mistake because the NES port is pretty mediocre by comparison. It contains one less trap than the original game (gun and string) and, while the C64 version displayed all of your available traps beneath your time, the NES release only shows which of the escape items you have. 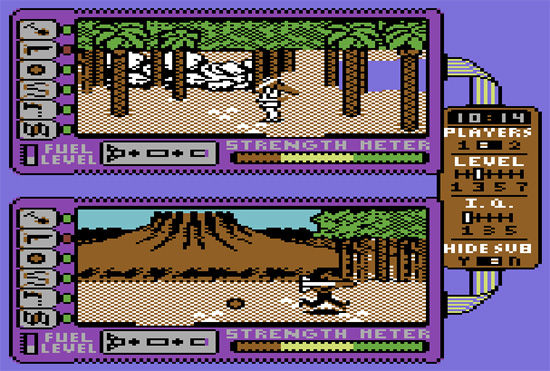 Two sequels were released for Spy vs. Spy, The Island Caper and Arctic Antics. The three all follow a linear progression, with the spies crash-landing the plane from the first game onto a desert island in the second. On the island, they must find and assemble three parts of a rocket and escape to a submarine off-shore. Unlike the first, traps must be built from items in the environment, such as coconuts, vines and sticks. There's also no return from death, favoring a longer health bar and regeneration. If you die, a headstone unceremoniously marks the location of your passing and that's it.

Arctic Antics, taking place in, yeah, the arctic, adds a method for healing, but not much else.

All the games in the series feature a computer antagonist or can be played against another human. The AI of the computer isn't very good and can easily be overcome with a bit of patience and persistence once you get a handle on the controls. The only real way to play the Spy vs. Spy games is with an actual, human opponent. 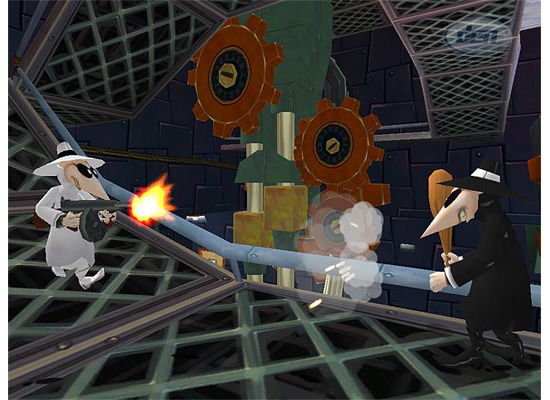 In 2005, a new version of Spy vs. Spy was released for XBox and PS2. Featuring 3D graphics, four-player deathmatch and a story mode for people with no friends, the game was an utter crapfest. The traps were pointless to use since it was always more efficient to just beat an enemy to death. If you're expecting classic Spy vs. Spy action, you're going to be sorely disappointed. Worse, if you've only played this game, you might never realize that a much better series of games preceded it.

I still love the Spy vs. Spy games. The multiplayer is balanced, frantic and fun. There's not much point to playing it on your own, though, and dated graphics along with some niggling control issues might turn off newcomers to the series.


Final Verdict: Still an amusing diversion with strategy potential that I'll never, ever find anyone to play with me.