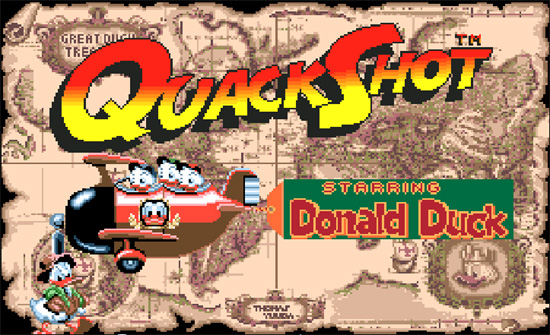 
I received a Sega Genesis from my parents one Christmas, the bundle pack with Sonic the Hedgehog. Sonic was a lot of fun, though it was a few months yet before I'd have another game to play. In these situations, you come to rely on the kindness of others, but I was one of only two kids I knew in the neighborhood who went the Sega route instead of having the (seemingly) more popular Super Nintendo and the other guy didn't have very many titles either.

Enter QuackShot, a Disney game starring Donald Duck who finds a treasure map in Scrooge's house and decides to go on a quest for riches. As a teenager by this point, I would never have admitted to liking this game. It's Disney, after all, and I certainly wasn't planted in front of the TV every afternoon to watch reruns of Ducktales and Darkwing Duck. Not me, no sir. Despite my protests, I played it quite frequently, in part due to not having a whole lot of choices but also because it was actually pretty fun. 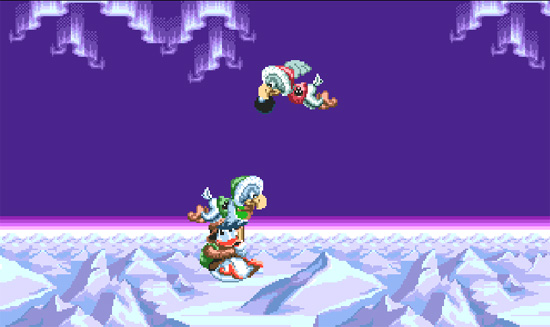 Green plungers stick to flying enemies, which is retarded.


Donald comes armed with a gun that fires three types of ammunition: A plunger, popcorn and bubblegum, with the latter having to be earned a few levels in. The plunger is a non-lethal attack that stuns enemies and is upgraded through the course of the game, allowing it to be used as a platform by shooting it at walls (in an absurd stroke designed solely to shoehorn another level) or to fly by sticking it to flying enemies and holding on for dear life. Popcorn shoots in a spread, and kills but is very costly in terms of ammo. Bubblegum fires a bubble that floats up and down and is mostly used to destroy certain types of blocks.

Also assisting Donald in his adventures is his well-documented, inexplicable, insane fury. As you run around the levels, some enemies will drop chili peppers. Once Donald has collected five of them, he flies into an unstoppable rage for a few seconds, swinging his fists wildly and moving like a meth addict. While useful, it only crops up a few times during the course of the game to allow you to get past more irritating groups of enemies. 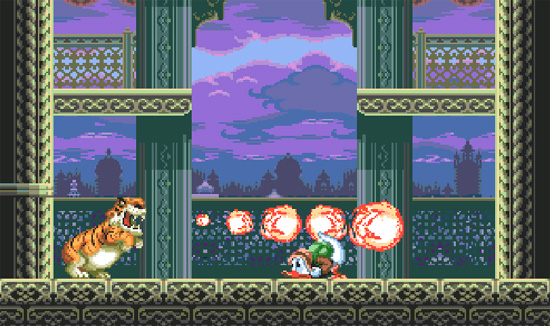 Because no game is complete without a fire-breathing tiger.


QuackShot consists of nine levels that you'll have to jump back and forth between while figuring out where you need to go next. Many of them force you to stop mid-way through and use an item acquired in a different level. Don't have it? Then you're going to have to go find it. Luckily, the designers were rather considerate in providing a checkpoint marker at these spots. Stand next to the flag and Donald can call in the plane and travel to a new location. When you return, you'll go right back the the checkpoint.

The individual levels are pretty well designed, requiring you to use the few skills Donald has almost constantly. Some of them are even circuitous in nature, bringing you right back to the beginning of the area and leaving you to wonder where the hell you missed the exit. 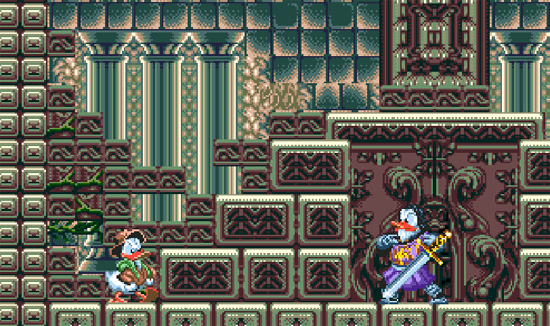 The Grail Knight? Really? Why not just put in the Quackzi Empire?


This game is a flagrant rip-off of Indiana Jones. They didn't even try to conceal it. The outfit Donald wears is very similar to Indy. The game's title logo looks like the font from the Indiana Jones movies, but it's also pretty close to that for DuckTales. There's a minecart ride, which I'd also excuse because they toss one of those into every Disney game, it seems. But one of the items you acquire is the Staff of Ra, for god's sake. There's a "leap of faith" area. And the final boss? A duck version of the knight who guards the Holy Grail. Subtlety is not its strong suit.

If you're not going to be original at least look good while you're doing it. QuackShot manages this well enough. The characters are detailed and well animated and there's some really cool backgrounds to some of the levels. There's a fair amount of variety to the enemies and the bosses are great examples of the kind of stuff you'd see in animated Disney TV shows of the time. 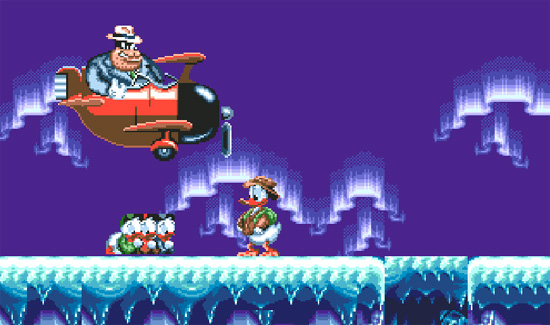 Unsurprisingly, Big Bad Pete is a recurring villain of the game


Another thing I remember about the game was its difficulty. I had a hell of a time playing through it as a kid, often dropping the controller and walking away from it in frustration. Having played through again now, however, I don't understand exactly what I found so challenging. Some of the jumps are a bit tricky and there are occasional moments where health can be a bit slim, but it really wasn't all that bad. If you are challenged by it, there is a continue feature that takes you back to the world map when you run out of lives.

QuackShot is not a great game. It's a good one. There's nothing that particularly stands out about it but it's a charming diversion for a couple of hours, right up until the point where you see what an ungrateful, gold-digging bitch Daisy Duck is. I swear, those two were made for each other. On the whole, the game is fun but nothing to get overwhelmingly excited about. And that's OK. With the massive quantity of licensed crap that gets shoved on to consoles, QuackShot manages to avoid most of the pitfalls and deliver an enjoyable experience.

Final Verdict: Nothing special, but nothing particularly bad either.