Adventure games have a long and vibrant history. At least, it's as long and vibrant a history as you can expect from something only about three decades old. Looking back, it's fascinating to watch the gradual progression from an entirely text-based medium to one composed completely of graphics. This week's game comes from those middle times, when keyboard input was being replaced with a point-and-click mode of play but text still played a major role.

Maniac Mansion was originally designed for the Commodore 64 computer and used a revolutionary new engine called SCUMM (Script Creation Utility for Maniac Mansion). The SCUMM engine allowed the player to utilize a cursor (controlled by joystick and, later, mouse) to input commands to the characters on screen. Dividing the screen, the top half featured a graphical environment while the bottom contained basic commands and inventory when necessary. Commanding characters in SCUMM meant clicking on a command (Pick up, Walk to, Use) and then clicking an object either in inventory or in the environment to interact with. 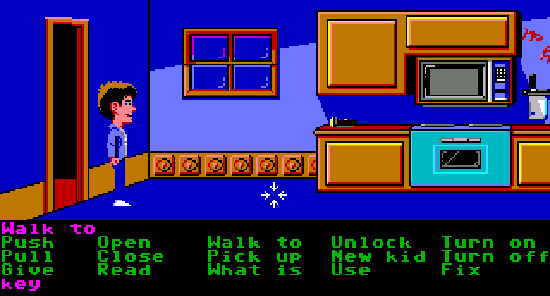 Now, I realize that this seems very rudimentary. What you have to understand is, up to this point, practically no adventure games had an interface like this. The vast majority of graphical adventure games moved characters with cursor keys and instructions were manually typed in long-form sentences. Often, these games would feature woefully small command syntax and relied on the player to move the character to just the right spot on-screen for the instruction to be carried out even if it could understand it. SCUMM changed all of that.

That change came with the game that the engine was named for: Maniac Mansion, a science-fiction comedy which parodied B-movies. You control Dave, a college student whose cheerleader girlfriend, Sandy Pantz, has been kidnapped by the mad Dr. Fred Edison. Dave must rescue Sandy before whatever nefarious plan the insane scientist is working on comes to fruition. But he can't do it alone. At the beginning of the game, you recruit two of Dave's six friends to come along with him. Each of these characters have their own personality quirks and skills that can both help and hinder your progress. Completing the game with different characters can result in different endings, as not every combination can finish using the same methods. 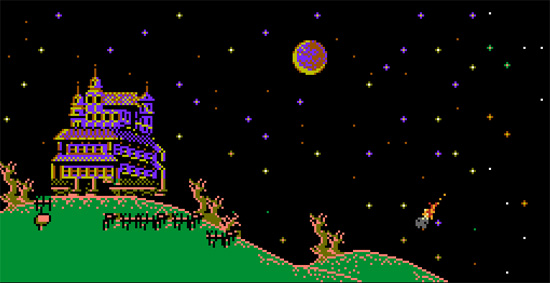 That is, if you manage to achieve one of the good endings. In order to break into Dr. Fred's secret lab and rescue Sandy, you're going to have to engineer situations that could potentially kill everyone in a five mile radius if you aren't careful.

The best part about Maniac Mansion is its humor. The situation itself is wacky enough. A mansion with a nuclear reactor in its basement, an Edsel with rocket boosters in the garage and a dungeon complete a with long-forgotten skeleton. An arcade, a darkroom and a medical examination room help complete the image of the home that has it all.

The residents, however, are where things really get strange. Dr. Fred hasn't left his basement in five years. His wife, Edna, is a nurse turned desperate housewife with a proclivity for bondage and a mirror over her bed. Their son, Weird Ed, has a nasty case of gigantism and an obsession with paramilitary operations. Then there's Dead Cousin Ted and those two sentient tentacles running about the place (well, Ted isn't doing a whole lot of running).

Interacting with these characters results in some of the most entertaining parts of the game and it's something you absolutely must do in order to win. Some of them will help you with the proper inducement while others will do whatever it takes to stop you. 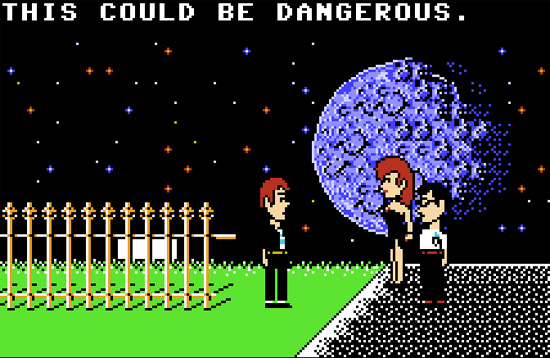 Screenshot of the NES port


Maniac Mansion made the rounds among all the popular computer systems of the time before being ported to the NES in 1990. This version offered different graphics and in-game music for each of the characters in your control. Even though music could be nice in a game that's predominately silent, the tunes in the NES port is highly irritating. Thankfully, it's represented by a CD Player in each character's possession that can be turned off.

The NES port is less significant in terms of what it adds than what it removes. Due to Nintendo's stringent, "family-friendly" image, all of the risque humor had to be removed from the game along with any hint of violence (a fact the designer responsible for the port found highly ironic; he wrote an essay about it which is available here). Taking out those elements took a lot of the charm with it. The humor is stilted, forced and not very funny.

In 1993, LucasArts returned to the Mansion in a new adventure game, Day of the Tentacle. This time, Bernard (the only original hero from Maniac Mansion to return) and his friends Hoagie and Laverne must stop a mutated Purple Tentacle from his dream of world conquest. To do so, they have to shut off a machine in Dr. Fred's lab which spews toxic waste into a river (and seems to serve no other purpose) yesterday through the use of Fred's Chron-o-John time machine. Of course, things go horribly awry, seperating the three characters in the past, present and future where they must deal with seperate incarnations of the Mansion. 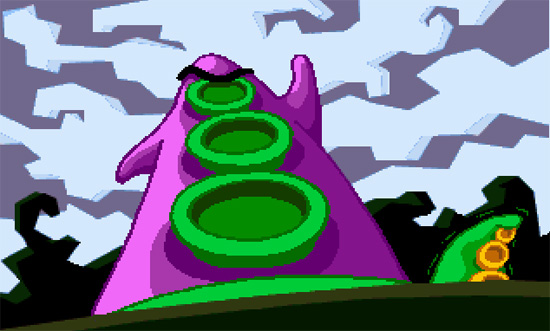 All of these benefits do not come without a cost, however. Day of the Tentacle has but one solution and only one ending, as opposed to the high level of replay value available in its predecessor. To help alleviate some of this, in an unprecedented move (though many developers have since copied it), the original Maniac Mansion is available in all its glory as a hidden easter egg.

Adventure games seem to have been completely abandoned by LucasArts and it's safe to assume we'll never see another Maniac Mansion. The SCUMM system was responsible for thirteen games, including classics such as the Monkey Island series, Loom and Sam & Max Hit the Road. It was replaced by a 3D engine called GrimE, programmed originally for Grim Fandango and also used in their last adventure outing, Esacpe from Monkey Island. 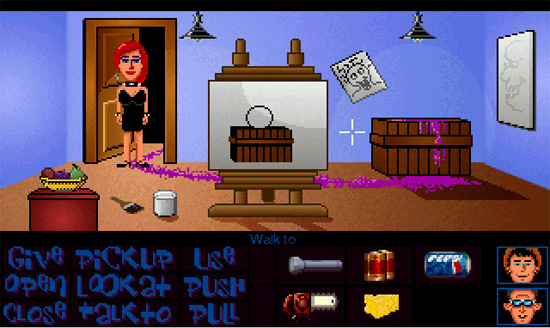 Fans of the adventure genre have not forgotten Maniac Mansion or SCUMM. A new version of the classic game, called Maniac Mansion Deluxe, was developed by fans and released in 2004. This version features dramatic improvements all across the board. The graphics look great and the music is very good (particularly if you've played the NES version). The interface reflects changes seen in Day of the Tentacle, using the same graphics for commands and graphic representations of your inventory instead of text descriptions. It is freely available and you really have no excuse not to download it right now.

Maniac Mansion changed the way we play adventure games and is probably one of the finest examples of the genre ever produced. It was easily one of my favorite games ever on the Commodore 64 (I had floppy disks with saved games for every possible combination of kids) and remains so to this day as I can easily load it up and am immediately entranced by its wit, puzzles and charm.

Final Verdict: You haven't lived if you haven't played this series.