I remember a time when Nintendo Power was running some interesting advertisements. This might just be faulty memory, as people I know who have every issue of the publication usually don't have a clue what the hell I'm talking about when I mention them. They ran a couple of pages each and appeared in the form of a serial comic that took place for several months. The ads themselves were for a game called Flying Warriors and all revolved around Kung-Fu tournaments with wicked awesome bad guys and some sort of chi-powers.

I'm not going to talk about that game today or its sibling, Flying Dragon. Long story short, they're incredibly limited 2D fighters that move slowly and are so rooted in tournament rules that it eliminates any sense of fun you could have with them. They suck. The end.

I mention the ads because I was always drawn to the company that was responsible for the product behind them, Culture Brain. It's the sort of name that sticks in your brain and, long before I had a subscription to Nintendo Power, I had played an odd little game from them called Kung-Fu Heroes. 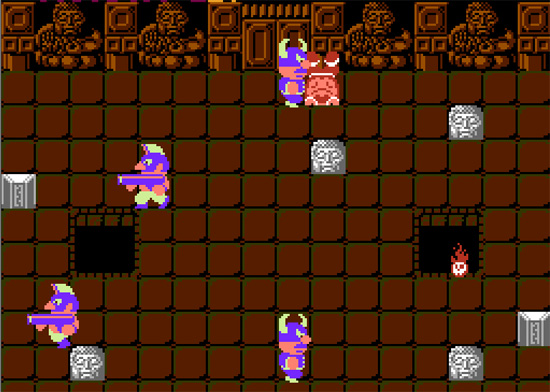 At the start of the game, your character can punch and jump. Jumping and landing on most enemies is just as effective as punching them. The character also has a special move called a "miracle kick" that you can perform if you've found a power-up hidden within a stage and there's a sword hidden in two of the levels as well.

In addition to the constant barrage of enemies in every level, there are also blocks that contain power-ups. Hitting these repeatedly will release various balls onto the play field, cause them to fly off and kill anything in their path or just disintegrate. Power-ups include money (used to buy temporary invincibility power-ups), miracle kicks and fireballs among many other strange and bizarre things that may or may not be of any use at all. 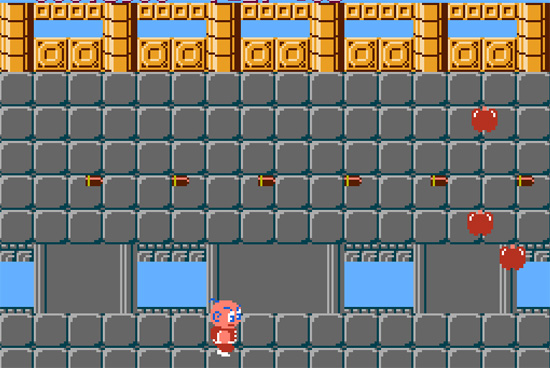 Occasionally, hitting all these blocks will reveal a key. Grab it, and a hidden staircase will appear. These staircases can either warp you further ahead in the game or take you to a rather barren bonus level. Floating in this bonus round are apples (which you hit for points) and little balloons that grant an extra life if you can manage to hit enough of them in the allotted time.

The game isn't that pretty for a NES title nor does it have any semblance of depth, short of the difficult to differentiate power-ups. The hit detection can be downright awful at times and the music gets so annoying that you'll want to mute your television set after about twenty minutes. It does, however, have one of the most compelling features found in an NES game: Two-player co-op. As stupid as the game can be, it's really fun to run around with a second player and beat things up, and this was the cause of many hours of play that never resulted in getting bast the fourth or fifth stage.

Years later, when I found myself working in a used game shop, I encountered another of these Culture Brain games. Remembering Kung-Fu Heroes and what fun I'd had, I always wound up trying out anything I found from the developer despite being horribly disappointed most of the time (though Mendel Palace is one of the coolest puzzle games ever). The game I found there was Little Ninja Brothers.

Released in 1989, Little Ninja Brothers (or Super Chinese 2) is an RPG, a vast departure from its arcade-ported predecessor. The story revolves around Jack and Ryu, a pair of young ninja who take on a quest to stop the sinister Blu Boltar from conquering Chinaland. The whole thing is rather goofy, with anime-styled characters, absurd villains and strange situations.

The game has all the trappings of an RPG released for the NES. There's your typical overhead view with tiny characters for travelling both on a world map and in towns. There are items and equipment you can buy to improve your character over time and an experience system that rewards combat with increased health. Some of the towns feature training dojos where you can learn new combat maneuvers, taught by completing a (rather annoying) minigame. And, of course, a barrage of random monster encounters. 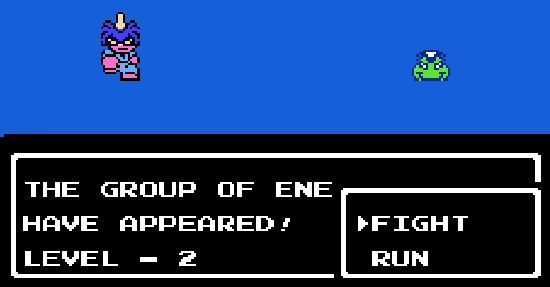 And this is where things get really different. When combat occurs, you're given the option to fight or run. If you choose combat, or have it forced upon you by failing to escape, you're placed into a 3/4 perspective where you beat down your opponents. That's right. The combat system in Little Ninja Brothers is Kung-Fu Heroes.

It's been given more depth, however. Now that you have equipment and items at your disposal, the whole exercise is less about trying desperately to survive long enough to finish the combat and ventures more into the territory of a beat-em-up. The most common power-ups make a return, and you'll still need certain ones to execute specific moves. 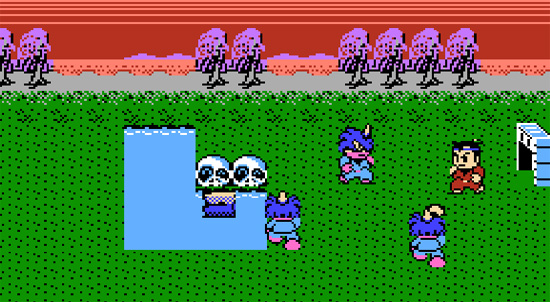 Little Ninja Brothers also features three difficulty settings for the combat, making it relatively easy for anyone to play, regardless of skill level. Besides, you can always have a friend help you out. In a relatively unheard of feature for the time, you can play this RPG with two players, using a drop in/drop out system where you can toggle the second player in any town's convenience store. And, if you're into that sort of thing, the annoying minigames (which play out much the same as Track & Field) used to earn new abilities are playable from the main menu. It's a lot of game for a little grey cartridge.

While the graphics are improved, as is the control and combat, the music is still pretty insufferable and I'd probably never have made it as far as I had if the rest of the game wasn't so damn fun.

While the series would end on the NES, Culture Brain continued further in 1993 with Super Ninja Boy for the Super Nintendo (released as Super Chinese World in Japan two years earlier). Carrying on with the RPG/Beat-em-up formula, it's more of the same. The story is still silly, this time revolving around the sinister machinations of an alien who gains popularity in Chinaland under the pretense of global peace. 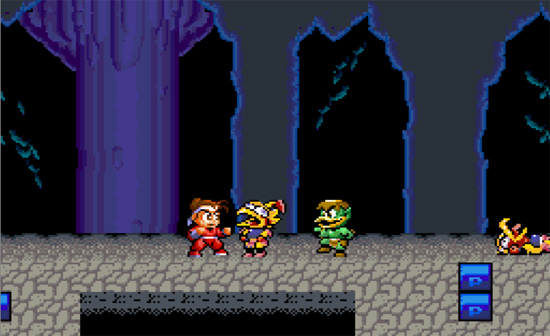 It's another graphical update and the audio is considerably better than either of the previous offerings. The largest change comes in the combat. Now, instead of the 3/4 view, combat takes you into a side-scrolling environment, such as Tales of Destiny would do years later. The control is identical, though, so you're just doing the same thing you always did in a smaller environment. On the plus side, there's less wandering around to attack enemies. By the same token, however, if there's water or other hazards in the area, you'll have to be that much more careful to avoid it. It's playable, but I think I preferred things the way they were. 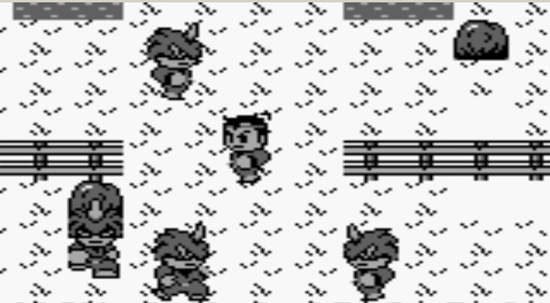 The only other two games from the series to make it to American shores were for the Gameboy (Japanese fans got Super Chinese 4 on the Super Famicom), and took their name from the latter SNES release. Ninja Boy is basically Kung-Fu Heroes but it doesn't translate well to the portable. It looks better from a graphical standpoint than the game it's based on, but the action is zoomed in to compensate for the Gameboy's small screen. Not being able to see the whole area you're fighting in is a serious detriment, particularly once you get a few levels in and enemies start using projectiles. 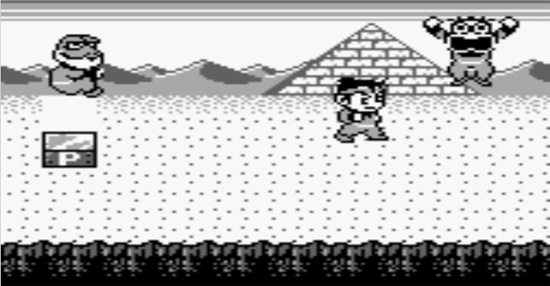 Ninja Boy 2 is yet another RPG and follows all the same rules as Super Ninja Boy does. The story takes the sci-fi direction yet further, with the heroes now space travelers who have crashed on to a distant planet. It's just as strange as all the rest, from what little playtime I've been able to invest in the game. There also appears to be the same two-player option present in other games, which I would assume utilized a Gameboy link cable but I haven't been able to confirm this.

I thought Kung-Fu Heroes was a great game for two players. And it is, provided you don't mind the somewhat glitchy play, difficult to differentiate power-ups and high difficulty. The remainder of the Super Chinese series, however, introduced concepts that seem completely out of character for the period in which they were released. I can't help but think that the games (of which Americans saw less than 30% of) have had considerable influence on the Action/RPG genre and they are certainly worthy of your consideration. 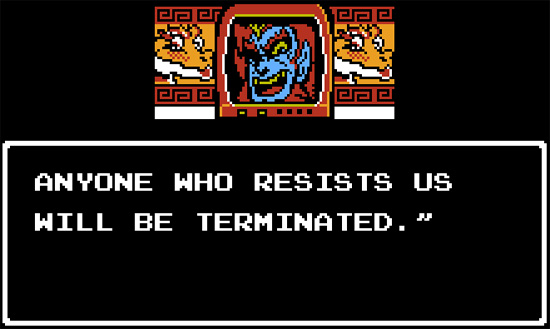 Final Verdict: As a series it's really different and fun, though not without flaws. The progenitor, however, is an annoying, buggy mess that's only entertaining if you have someone else to play with.