I originally had a different game in mind for this week's column. I played through, grabbed my screen caps and started writing. Then, over the weekend, I reorganized some of the stuff in my living room and found a cartridge that I knew had to be covered post-haste. 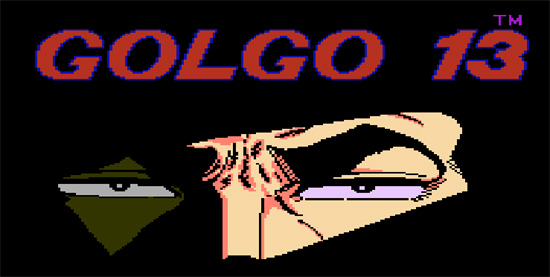 
When the world's intelligence agencies need someone to save the world, they call James Bond. When they want someone fucking dead, they send in Duke Togo, The Man with the Custom M-16.

Golgo-13 began in 1968 in the pages of Big Comic manga and continued its Japanese run until 2003. It has spawned two live-action films (Golgo 13, 1973; The Kowloon Assignment, 1977), two feature-length anime films (The Professional, 1983; Queen Bee, 1998) and a new series due to be released later this year. In 1988, Vic Tokai brought the series to the NES with Top Secret Episode, an international spy thriller with intrigue, suspense and short-skirted hipster chicks. Oh, and Duke Togo: The Man with the custom M-16 who'll kill anyone for a million dollars. 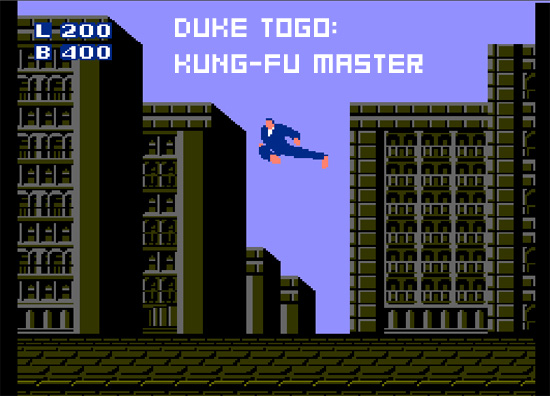 And that's a straight, vertical leap!


The main character always struck me as a badass who could do anything and was way cooler than James Bond. But the primary reason this game remains so vividly entrenched in my memory was that, at 10 years old when I first played, I had never before seen a video game include some of the concepts it had. Golgo-13 (The Man with the Custom M-16 who uses the alias Duke Togo) is billed as a spy in the game, but he's quite clearly an assassin. He smokes in the game. That's not entirely original, and Metal Gear was released in the same year, it was the first I'd seen it and surprising with the rapidly ramping anti-smoking sentiment in the late 80's. There is a graphic sniping sequence early in the game. And, despite how original people thought the concept was in GTA III, Golgo-13 was having sex to regain health over twenty years earlier. Now that all of these elements are rather pass� in gaming, is Top Secret Episode worth playing?

The story begins with a cutscene of a helicopter exploding over NYC. It carried the plans and vaccine for an experimental bacterial weapon, now stolen. A shell casing from an M-16 from an M-16 is found amidst the wreckage, leading the CIA to believe it's the work of Golgo-13 (The Man with the Custom M-16). Secret international organization FIXER knows the truth, that Golgo-13 was framed by the remnants of the DREK Empire who have designs on global domination, and hire the titular assassin to acquire the vaccine and eliminate the leader of the DREK Empire. 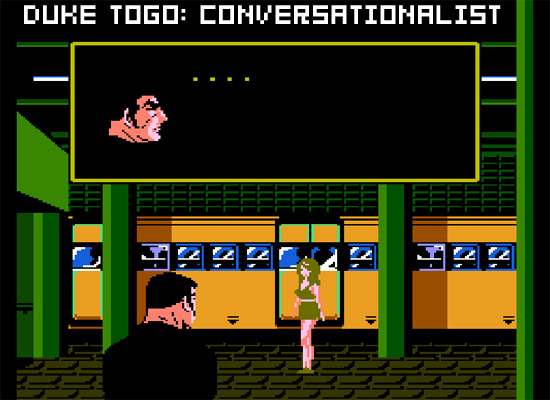 Take notes, gentlemen. Lines like that are how you get bitches.


The game's complex story is told through a series of conversation scenes and brief blurbs between acts. The translation is a little spotty, to say the least and the five or so designs used for characters can make keeping track of who's who more than a little challenging. Adding to the complexity, Nintendo of America removed details of the DREK Empire. Originally, the DREK Empire is a resurrected Nazi regime but, just as in Bionic Commando, all references to the Third Reich are removed save for one item bearing a swastika which was overlooked. 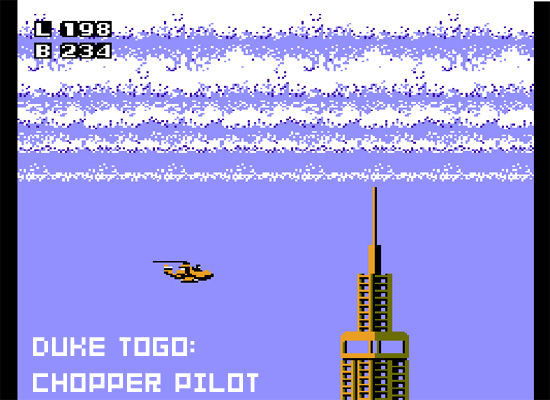 Is there nothing this man can't do?


In Top Secret Episode, the designers attempted to cram several different game types together and meet with variable levels of success. The first is a side-scrolling mode where Golgo-13 (aka Duke Togo: The Man with the Custom M-16) walks left and right. These are used in intelligence gathering levels, where you must avoid being killed by CIA and KGB agents while finding contacts in subway stations, hotels and other locales to further the story, and enemy base levels filled with frustratingly difficult enemies.

The mode works well enough and I really like the first couple of street levels because you can't tell who's an agent who'll try to kill you and who's an innocent civilian. Unfortunately, they suffer from a fatal control flaw: Duke Togo (The Man with the Custom M-16) cannot duck and fire his weapon at the same time. Almost every fucking enemy has this capability, but our super-assassin doesn't seem to have the dexterity to accomplish such a feat. 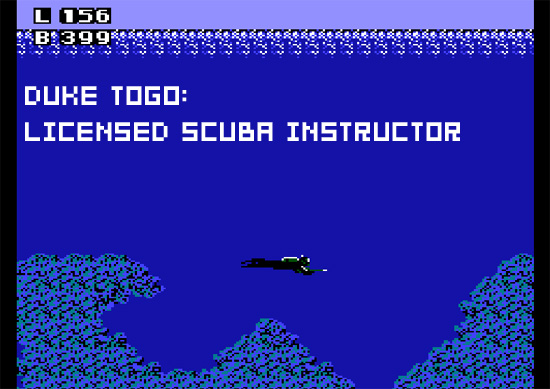 No. There is nothing this man can't do.


Other levels will feature horizontal shoot-em-ups in a helicopter and SCUBA diving through underwater caverns to find enemy bases. These are both quite fun, especially since you don't have to worry about the fact that you can't duck and shoot. Also, in all three of these modes, the action will suddenly stop at certain points with an onscreen explosion, launching you into a first-person mode where you kill several enemies all attacking at once. Very cool.

There is a fourth play mode, one which is the bane of my existence: 3D mazes. These are first-person affairs where you wander aimlessly through non-descript hallways with no defining features, sparsely populated with the occasional enemy. There's no in-game map to use, so you'll have to draw your own or use one you find online. But that's only going to help you a little bit because, even with a map, the utter lack of details makes it very easy to get lost. Walls will occasionally fall out of nowhere, requiring you to use one of the maximum three grenades you can carry to pass them which can only be replaced by killing a specific enemy type in the maze. Oh, and they have multiple floors, which you'll find out after you take your first step in the first maze because there are FUCKING TRAP DOORS EVERYWHERE, making it obscenely hard to keep track of where you are. This is a horrible, horrible addition to the game and more than once I've quit playing upon reaching them because they're boring and frustrating.

And, while I'm pissed off, here's another thing that irks me a bit. Duke Togo, The Man with the Custom M-16, hardly uses a Custom M-16. He runs about armed with a crappy automatic with a horrible fire rate. Sure, lugging about an assault rifle in public would be none oo subtle. But Golgo-13 runs through several enemy-controlled facilities populated entirely by DREK enemies. Where the fuck is the Custom M-16? It says "Golgo-13: The Man with the Custom M-16 in the pause screen (which, btw, looks pretty cool for a pause screen). Oh, right. It's a plot device. An excuse to make you run through another one of those mind-numbing mazes. I feel a little betrayed by this. 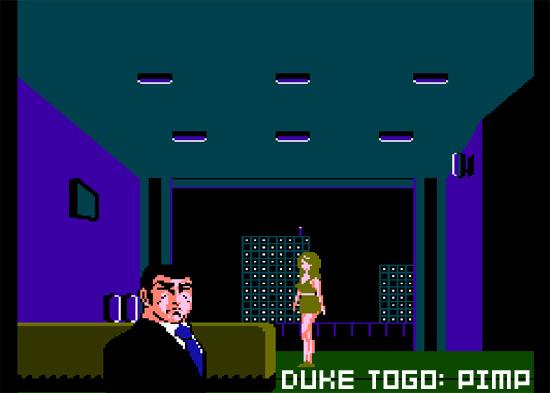 Who's the ethnically ambiguous assassin that's a sex machine to all the chicks?


The graphics are pretty dull. In the side-scrolling levels, sprites don't have any facial details except for the sideburns on Golgo-13 (you know, Duke Togo? The Man with the Custom M-16?). Things are a little better in some of the conversation sequences but, really, it seems more attention was paid to how the game played over how it looked. Normally, this is ideal for me but with those goddamn maze levels it's infuriating. Thankfully, the music is well done. 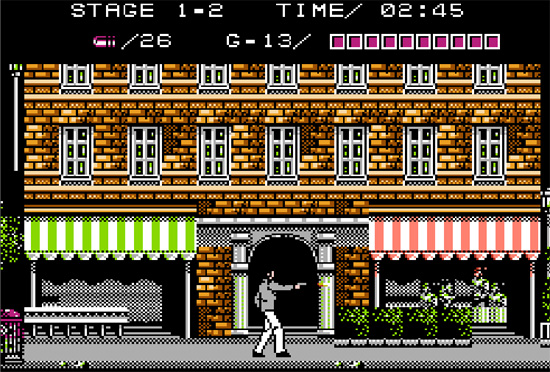 
In 1990, Golgo-13 (who, if you hadn't heard yet, is The Man with the Custom M-16) returned to the NES in a sequel called The Mafat Conspiracy. This is a much more straightforward, run-and-gun platformer. The surprise first-person sequences are gone, along with the diving and flying missions. Replacing them are levels where you drive a Ferrari, avoiding KGB agents and bombs. You'll notice I didn't say that they took out the 3D mazes. There's a reason for that: They're assholes.

This game can be quite a bit more challenging, as the maximum health and ammo are drastically reduced from that of the predecessor. Also, time limits have been integrated into nearly all aspects of the game, giving it more of an arcade feel. Duke Togo (The Man ... just The Man) has overcome his fear of crouch shooting, which helps quite a bit.

It's graphically superior to Top Secret Episode by a long shot and looks really good for an NES game. In particular, the act title cards (which formerly had a blocky, red skeleton standing on the number 13) are beautifully animated views through the scope of the M-16. Moving story development to well-drawn cutscenes and a better translation is an excellent touch. Everything is quite nice here. If Top Secret Episode had looked this good and didn't have those maze levels, it would be one of my favorite games for the NES. 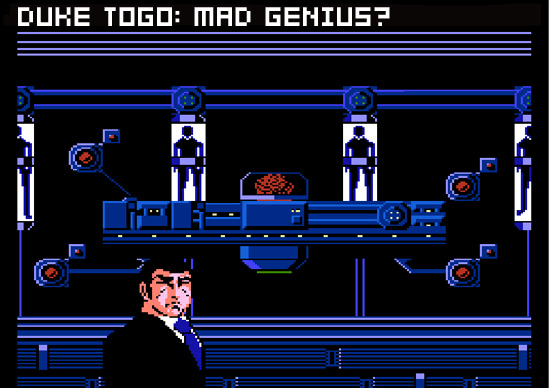 
For that matter, Top Secret Episode is still one of my favorite games for the NES and I can't explain why. The control is lackluster, the story is incomprehensible, level design is mediocre, graphics largely suck and the dialogue is downright laughable at times. But it tries so hard to be a good game that I just have fun playing it. Up until the point I hit a maze. Then I blank out and find myself in a strange room surrounded by dead hookers. Odd.

Final Verdict: Crappy game but I love it anyway. Chalk one up for nostalgia. 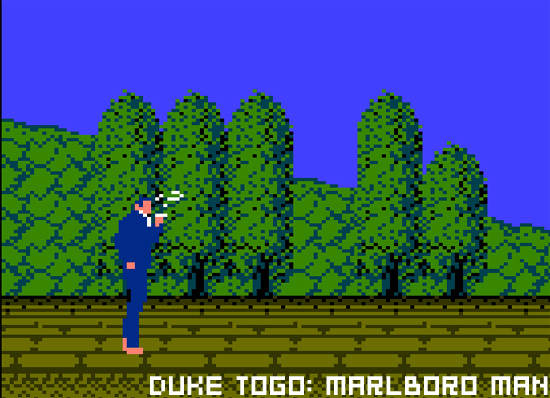 Goes down smooth but will eventually cause your death.