As a child of the 80's and early 90's, I grew up on cartoons. There were cartoons on after school and then the motherlode on Saturday mornings. There was practically no time during the day that you couldn't flip to a channel and enjoy some animated entertainment. Some were great, some we thought were great because we were too young to know better and some were Snorks.

The first few years of the nineties were particularly excellent for cartoons. As the Saturday morning shows started to peter off in their popularity, the weekdays thrived. Warner Brothers and Disney seemed locked in mortal conflict over the hearts and minds of children everywhere. Tough decisions had to be made when Animaniacs and Darkwing Duck aired in the same timeslot. One show that I almost never missed was DuckTales. There was something so utterly charming about the characters and the animation that compelled me to keep watching, even if it was essentially the same thing day after day. 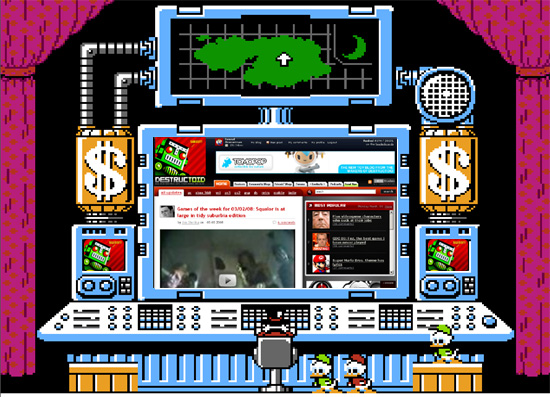 Scrooge obviously has both taste and class.


While these cartoons were enjoying such success, it was only a matter of time before the licenses started proliferating into the games market. Disney turned to Capcom, who was already known for producing top-notch platform games, to make games based on DuckTales, Chip 'n Dale's Rescue Rangers and Darkwing Duck.

DuckTales, as with the TV show, follows the exploits of Scrooge McDuck as he attempts to increase his already mammoth wealth. In the game, he's seeking out five of the world's greatest treasures. Controlling Scrooge, you'll travel to the Amazon, Transylvania, the diamond mines of Africa, the Himalayas and even the moon. Along the way, Huey, Dewey, Louie and Launchpad McQuack will lend a hand or give direction as to how to complete levels. 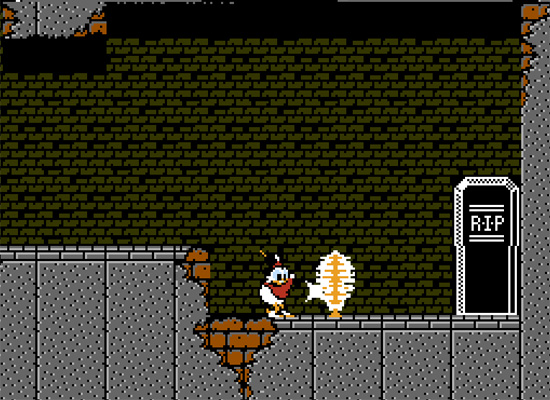 Some enemies had creative methods you could employ to kill them


Scrooge doesn't have a whole lot of moves in his arsenal, limited pretty much to running, jumping and using his cane. The cane allows him to bounce higher than the standard jump, kill enemies by driving it into their cartoon skulls or to hit objects in levels to clear paths or make secret bonus items appear. And that's pretty much all there is to the game. It's a testament to how simple a game can really be and still be fun. 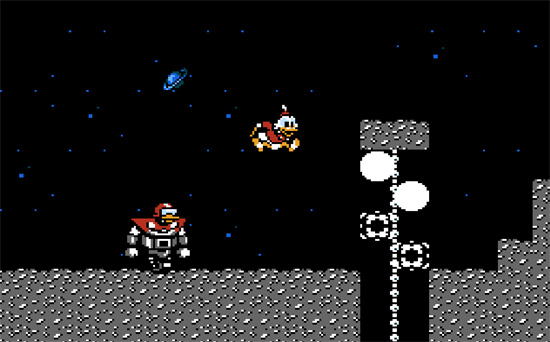 The only thing this game needs more of is Gizmoduck


Several secondary characters make appearances in the game. Bubba Duck, the frozen caveman, is hidden in a level and needs to be rescued. In a woefully brief appearance, Gizmoduck clears a path on the Moon. The Beagle Boys pop up in a few of the levels, while Magica De Spell and Flintheart Glomgold appear as boss characters (Glomgold's is at once disappointing and exhilirating). It's quite excellent fan service that feels right in line with the tone of the show.

The game has two difficulty settings, Easy and Difficult. The Easy setting isn't exactly easy, but it's certainly far more forgiving than Difficult, which may frustrate all but the most persistent players. The level design is very solid and forces you to reconsider techniques from time to time, such as in the Himalayas where you can't just bounce your way through the whole level due to deep snow that Scrooge will become stuck in. There are many little, hidden rooms and paths in each area which will have valuable power-ups, bonus points or absolutely nothing at all. The maze-like Transylvania level ranks today amongst my favorite platforming levels ever.


Three years after the release of DuckTales, Capcom gave us a sequel. DuckTales 2 follows the formula of the first, with Scrooge again travelling the world in search of rare and valuable treasure. It looks the same and sounds the same, but the gameplay only resembles the original title.

While all of the same basic elements persist, Scrooge gets a few more ways to interact with the enviroment with his cane. He can still bounce on it and hit blocks and such, but the reasons for doing so are now more intrinsic to the level design. Some areas will have Scrooge riding on rubber rafts, hiting the wall behind him to propel the craft forward. New abilities manifest themselves in using the cane as a hook to hang from rings on walls or to pull levers and switches. 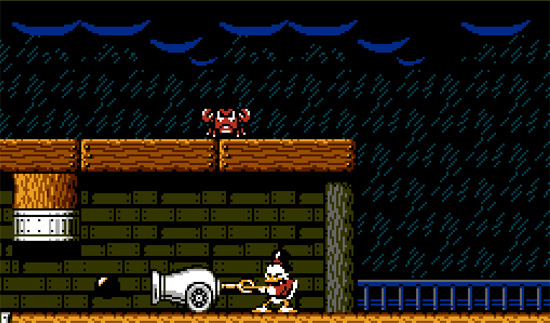 While it's nice to see Capcom working on innovating the game, it always felt to me like the formula was strong enough on its own that it didn't necessitate these changes. They really slow the pacing and, frankly, give an excuse to the level designers to not have to be quite so clever. Constant placement of these new elements quickly becomes somewhat dull and made me long for the run-and-jump action present in the first.

They're both excellent games, mind you, and highlights of the platforming genre on the NES as a whole. The first DuckTales, however, is a title that I can go back to time and time again to feel like a kid. This is a game worth having in any NES collection, but I'd strongly encourage anyone to at least NOT try the game out via emulation. Don't be put off that it's a cartoon license, DuckTales is a winner all the way.

Final Verdict: A classic plaformer with just the right amount of charm and challenge.