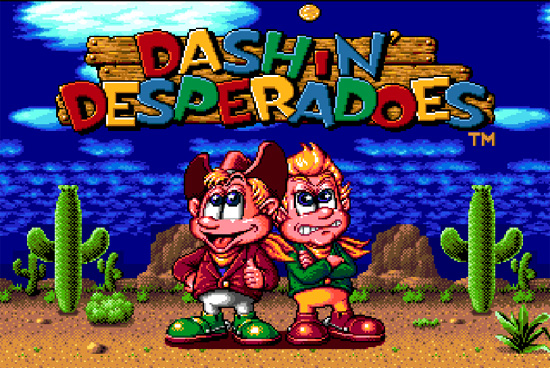 I love to play my games with other people, which probably explains why so many of the games I remember having the most fun with as a child are those that have some kind of multiplayer component. Either co-op or competitive, it's never mattered too much to me so long as someone else was having fun along with me.

Oddly, my tastes never veered much into the realm of 2D fighters, despite Street Fighter and Mortal Kombat reaching their peak of popularity when I was in my early teens. I'm not sure if it's because they felt repetitive (beat a guy up, beat another guy up, rinse, repeat) or what. Sure, I played them from time to time but the games that always stuck out in my memory were just a little ... different. 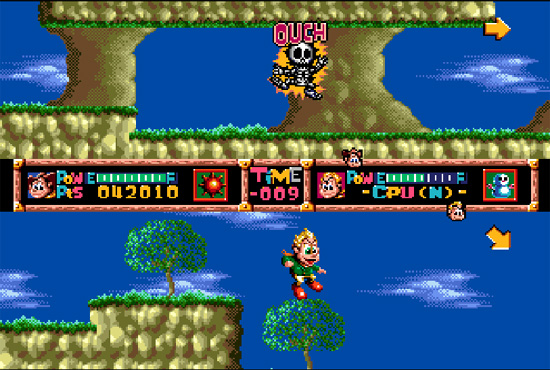 A highly competitive game and one that I played with my friends often was Dashin' Desperadoes. We used to get such a kick out of hitting each other with bombs. It was simple, uncomplicated fun... or was it?

Dashin' Desperadoes is a 2D platforming footrace. You control one of two cowboy characters lusting after a blonde bimbo as you run through six different locales. You have the ability to run, jump, throw weapons and do a rolling dash (which flattens your enemy should you hit but also uses energy that regenerates very slowly). Apart from the ever-present threat of your opponent, the levels bustle with assorted enemies and traps. If you manage to reach the object of your affection before your opponent, you win the round. 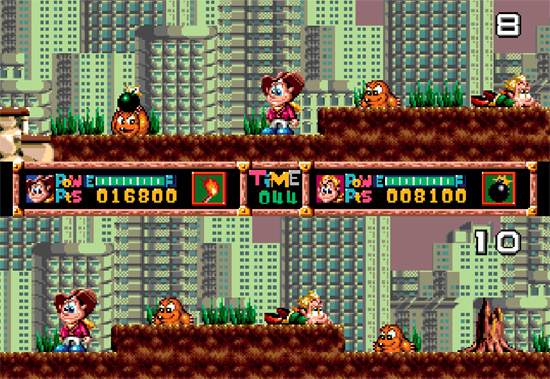 This is a game that was utterly designed to be played with a second player and no greater evidence of this exists than its abysmal one-player mode. The computer opponent, even on the easiest difficulty setting can be a little bitch. Marvel at how he'll gain tremendous ground against you and then, for no good reason, stand around and lob bombs in your direction just to be a dick. It's particularly great when he does so right at the edge of the finish line.

It's also not particularly inventive. There's eighteen stages in the six worlds of the game. You'll spend the first two racing against the CPU to get to the girl. The third is a boss fight with the CPU having kidnapped the girl which offers very little variety from one world to the next. 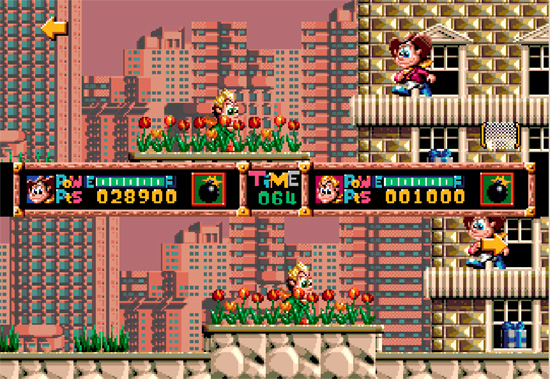 In two-player, however, there's really nothing like it. The whole thing is engineered to keep things hotly contested. Every level has sections where the path splits, allowing you to take a high or low road. In some instances, one of the paths will open up due to the actions of the player in the lead and give the runner-up an easier route to regain lost ground. Some enemies, such as vultures, will even lend a helping hand by carrying the player in the lead backwards along the path but moving the loser ahead.

Another way the game keeps things competitive is through its judicious application of power-ups. There's a cowboy boot that lets you run faster but there's also a potion which seems to make you run faster and has you blinking like you're invincible (but you're not invincible, which is stupid). Others are intended to cause negative effects on the opposition, such as sending bees or a lightning bolt to wherever they are and stunning them for a considerable amount of time. Many of these power-ups only appear once one person has passed the point where they show up, giving the guy lagging behind yet one more chance to close distance. 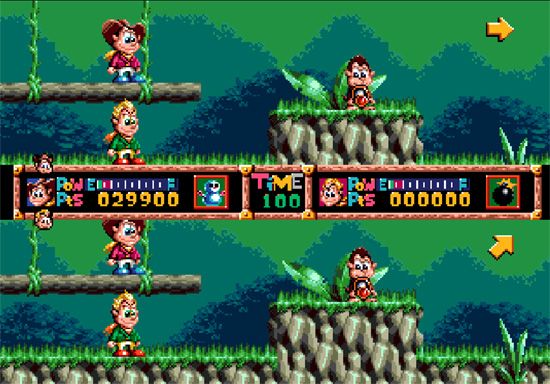 The levels also differ wildly from the Single-player game. In the first level of each world, you'll still be racing from one end to the next. The second level usually consists of a more mini-game atmosphere. You might be stomping on moles or trying to recovering jewelry from a kleptomaniacal seagull. The third is, with one exception, a race from one end of a level to the other and then back, with increasingly absurd requests from the bimbo. I can understand forgetting your lunch and asking someone to go get it for you. Demanding that someone find you a wildflower in the arctic is fucking cruel. If there's one lesson to be learned from playing this game, it's "bros before hos".


All told, Dashin' Desperadoes is a pretty fun game so long as you have someone else to play it with. One could probably make a case for this game being inspirational to the developers of Power Stone and other titles of its ilk. If I had to choose between cutting my hands off or only having the single-player version of this game to play for all eternity, I'd really miss my hands.