Remember that little dude? He's the 7 Up Spot, mascot for the clear lemon-limey beverage during the first half of the nineties. I used to love those commercials when they were airing and it's no surprise. Seems fairly obvious to me that they were attempting to target a younger demographic with these advertisements. And what better way to worm your marketing campaign into the hearts of kids than through video games?

That seemed to be the wisdom behind Cool Spot, a platform game from Virgin Interactive for every gaming system under the sun in 1993. I can't recall if this was a rental or a game I actually purchased. It's also entirely possible that my first exposure was NOT due to downloading a PC version. Whatever the case, I remember it looking great, sounding better and being quite creative in its design.

You control the Spot as he attempts to rescue his fellow anthropomorphic decimals from ... something. It's never really made clear why the Spots are locked up in cages around a beach resort. Before you can set them free, however, you must first achieve a certain percentage of "Cool" by collecting spinning, red spot logos littered around the stage. 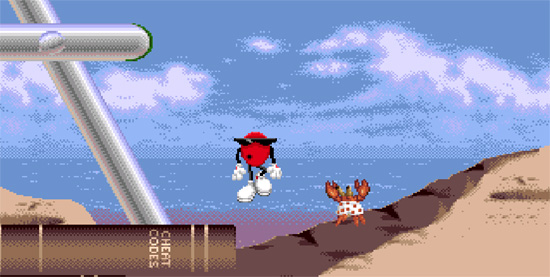 Barring your path are a fairly uninspired group of enemies. Crabs, bumblebees, worms, cheese-throwing mice and so forth. Spot can fight back by hurling what appears to be carbonation in eight directions (He got equipped with Metal Blade, apparently). The environments also have threats in an assortment of spiky things to damage you. As you take hits, the Spot at the top of the screen slowly peels from the score panel until it drops off completely when you die. It's a cute way to represent health that fits well with the cartoony tone of the game far better than a standard bar would.

The level design varies from very clever to mildly dull. Since you're a tiny part of a bottle label, everything in the game is supersized and it was very amusing to realize this is the case. In the first level, you eventually find yourself on some kind of massive, tube structure which turns out to be a beach chair. Very cute. 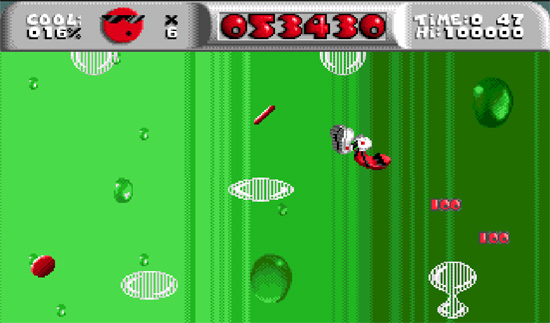 Some levels have you wandering through platform mazes of ropes and such. These seem to drag on and on, however, and aren't really all that much fun. The most joy out of the experience is usually comes when you're airborne. Great levels more than make up for the mediocre, but it just goes to show that you can't be creative all of the time.

One of my favorite bits of the game are the bonus levels. If you reach a percentage of cool above and beyond the minimum requirement, you're taking to a stage within a bottle of 7 Up. While in there, you propel yourself up and around using the carbonated bubbles in the soda and collect more cool points with the possible reward of an extra life at the end. Each bonus level also contains a letter in the word "UNCOLA". Collect them all and you earn a continue. 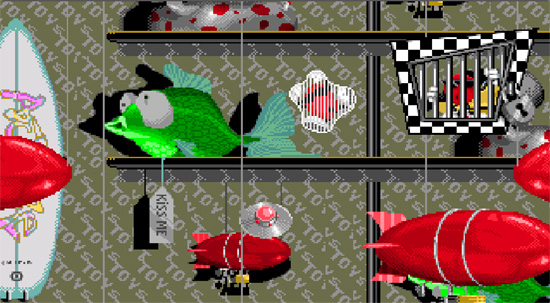 In terms of the graphics, things are pretty sharp. Spot and the enemies are animated well and contribute considerably to the playful nature of gameplay. Background music is exceptional, though, and Cool Spot won a few awards for its tunes (several of which were written by Tommy Tallarico).

Cool Spot isn't deep. It's an advertisement. Unlike the advergames of today, however, it's obvious that great care was taken to ensure that this wasn't simply churned out to sell more soda. It's a real game and it's real fun.

It isn't the only game in which the Spot characters were used. Three years before Cool Spot, a NES title was released. Called simply Spot, it's basically a clone of the classic arcade game Ataxx that has animated Spot characters which act as your pieces.

The object is simple: Have the most spaces on the board set to your color. Each turn, you select one of your pieces and then select an empty space where you would like to move. If you choose one of the eight spaces directly connected to your piece, it will spawn a new piece on the new space. Alternately, you can choose a space one spot further out which sill then move your piece to that location and vacate it's orignal position. Whenever a piece is placed, any pieces on adjoining squares are changed to the color of the moved piece. 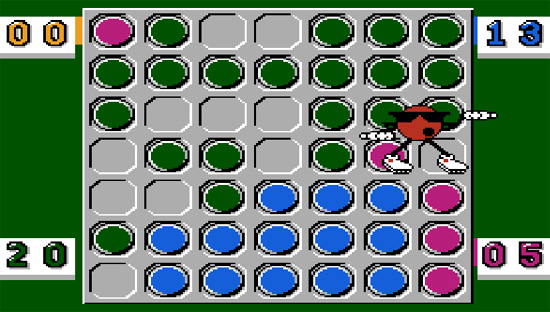 It's a great strategy game, if not an original one. When moving around the board, an animated Spot will crawl out of a piece and do a little dance move (several of which are Michael Jackson's) while moving to the designated space. They're cute, but it really drags out the game and there's only so many times you can watch a Spot "walk like an Egyptian". Thankfully, they can be turned off in the options.

The game supports up to four computer or human players (using a Four Score or Satellite). Computer players have four difficulty settings, though I honestly haven't observed all that much difference between them. It could just be that I suck, but it seems just as easy to lose to a group of level 1 opponents as any other. 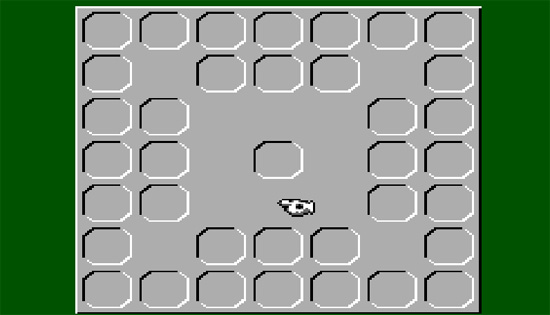 Another interesting feature of the game is the ability to create your own boards. Spot comes with a considerable amount of pre-made designs, any of which can be fiddled with to create new challenges. There's a lot of replay value in the game if it's something you enjoy. Just make sure you mute the tv, as the beeping, blooping audio gets really grating after about ten minutes.

In 1994, a follow-up for Cool Spot was released. Spot Goes To Hollywood is a drastic shift from the previous title in many ways. It was released for Sega Genesis, Saturn and the Playstation.

In this game, we find Spot still running about and collecting red Spots, shooting enemies and such. The new levels are all movie themed, and contain many homages (I'd hesitate to call them spoofs or parodies because they aren't realy funny). Films that get the Spot treatment in the game include Indiana Jones, Tron and The Terminator. 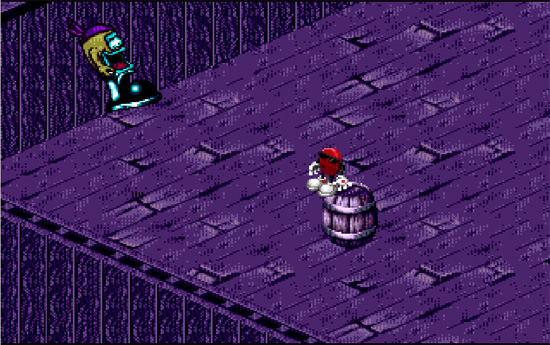 No longer side-scrolling, Spot Goes To Hollywood changes the perspective to an isometric view. As a result, platforming elements have become very much a sideline to what feels more like a shoot-em-up with a lot of space between enemies. The levels are bunched together in groups of three or four, and the final one of each changes up the gameplay in some fundamental way. There's a swimming level, for example, and the Tron level has him riding a motorcycle.

This game controls horribly. When the viewpoint was rotated forty-five degrees, they seemingly forgot to do the same with the directional pad. Pressing up moves you diagonally up and to the right, which is more than a little bit disorienting from the outset and makes hitting enemies much harder than it should be. Enemies require many hits to kill and lots of them have ranged attacks which always target very well, which results in constant frustration from being easily damaged while unable to return the favor. 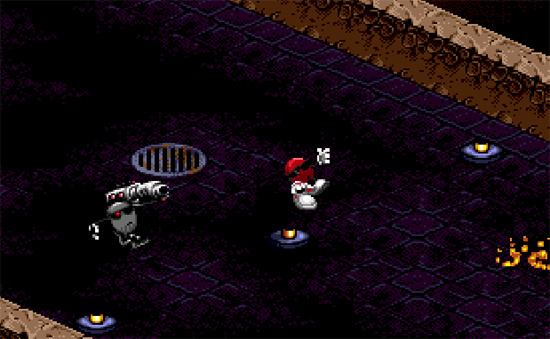 Spot Goes To Hollywood still retains the same level of visual charm as its predecessor, if not improving upon it. The music has suffered considerably. Gone are the catchy or exhilarating background tunes, replaced with ho-hum tracks.

To be fair, I didn't play more than a few levels of this game. The experience was painful enough when they did the same shit to me with Sonic 3D Blast, but at least that was fast-paced. Spot just plods along, ever so slowly. A "run" button has been added to the controls but it doesn't help nearly enough. What the game really needs is a "make this fun" button.


Final Verdict: On the whole, Spot is represented pretty well in gaming. They aren't legendary successes (though Cool Spot is pretty damn good) but neither are they massive failures like some advergames I could name.