On the Table: Fluxx

While I adore videogames, I'm equally fond of board and card games. On the Table is a weekly feature of my C-Blog that examines some of these analog entertainments. If you have a suggestion for a game to appear in this column or suggestions on how to improve it, please let me know.

As a player of tabletop games, I spend a lot of time reading rules. From the simple leaflets that come in most card games to the tomes of role-playing regulations which can run hundreds of pages in length, rules are one of the most fundamental aspects of game playing. Without a rigidly defined series of rules to govern play and determine a victor, a game could not be fair and, thus, not be fun.

Fluxx flies in the face of those conventions. A card game for two to six players, Fluxx features mechanics that constantly change the rules and even the victory conditions as play progresses. At the start of a game, there is only one rule: Each turn players will draw one card from the deck and play one from their hand.

There are four types of cards in Fluxx:

New Rules: New Rules act as amendments to the basic "draw one, play one" rule. They might increase the number of cards drawn or played, place limits on the quantity of cards you can hold in your hand or keep in front of you, or give benefits to players who meet specific conditions. If a New Rule is played that contradicts another New Rule already on the table, the older rule is discarded and replaced by the one being played.

Actions: Actions are simple, just do what the card says. You might be able to take cards from opponents, trade in your hand for an entirely new one, take an extra turn or get rid of a rule that you don't like.

Keepers: It's just what it sounds like; You keep them. Specifically, you keep Keepers in front of you. They are often used to accomplish Goals, prevent other people from accomplishing Goals or to meet conditions for bonuses defined by New Rule cards.

Goals: A Goal is the objective of the game and is as subject to change as the rules. At the start of a round, there is no goal and won't be until one is played. They most often require that a player have a certain combination of Keepers in their possession. Since only one Goal can be in play at a time, they are replaced by any new Goal card played. 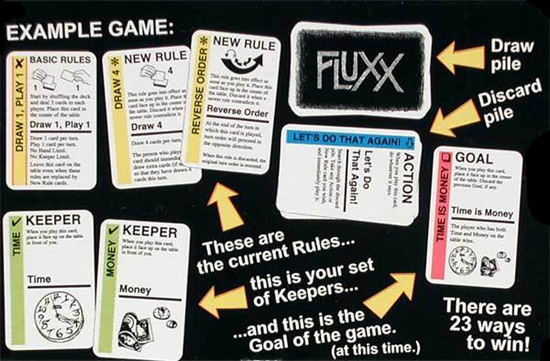 Play continues around the table, rules being added and goals constantly switching, until someone satisfies the conditions of the currently active goal. This can be anyone at any time. The round then ends and a new round begins.

It's simple, it's fun and anybody can play it with practically no knowledge whatsoever. All the rules you need to know to play Fluxx are right in front of you the entire time. 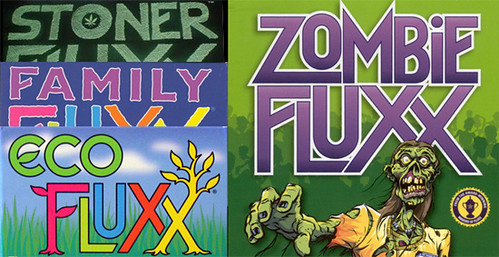 The popularity of Fluxx has resulted in a several themed versions and a few expansions. Stoner Fluxx is the basic Fluxx game retooled to appeal to cannabis lovers. Bongs and brownies become part and parcel in the Keepers and goals, while actions relate more to forgetting what you were doing and having the munchies than the cold game mechanics of the original set. On the other end of the spectrum, Family Fluxx tones the game down with kitties and puppies and other family-friendly images replacing more adult concepts such as war and death found in the standard game.

More dramatic changes can be found in EcoFluxx and Zombie Fluxx. These sets contain actual rules relating to their themes. EcoFluxx uses a food chain of sorts, where cards can "consume" one another and can be recycled from the discard pile. Zombie Fluxx introduces new card types, Creepers (Keepers that you don't want but must play which prevent you from winning) and Un-Goals that can cause all players to lose as well as weapons and rules for killing zombies with them.

For my money, the standard Fluxx game is just fine the way it is. Some of these other games are fun, but nothing beats the simplicity and elegance found in the base set. If you really need to add some spice to your game, why not just pick up some Fluxx Blanxx and make up some of your own?

At around $12, you can have a game that never plays the same way twice, is compact enough to carry anywhere you want to take it and is easy to teach to someone in a matter of seconds. There is really no excuse for failing to have a copy of Fluxx in your game collection.


MOAR ON THE TABLE
#Community
Login to vote this up!