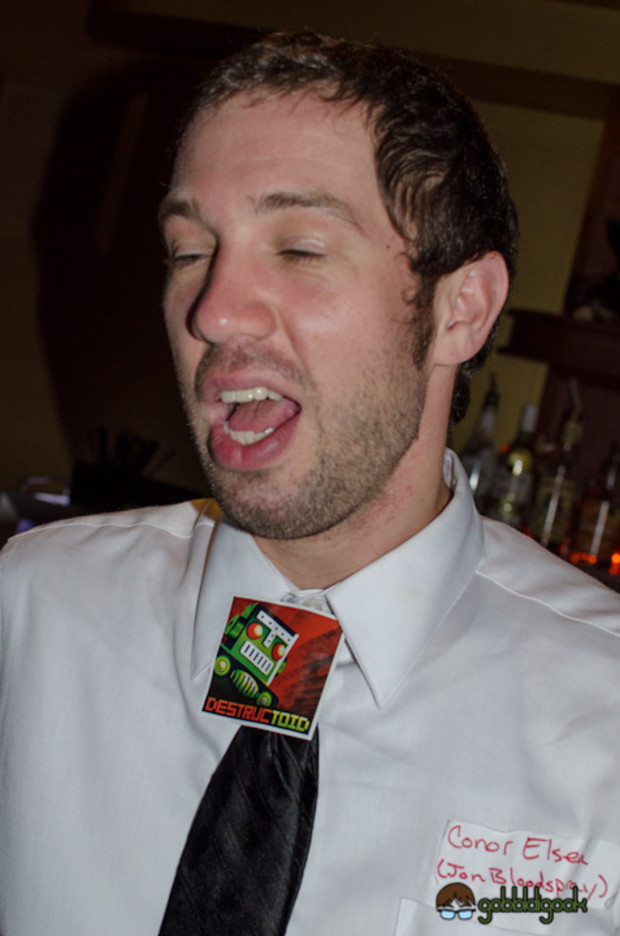 And I don't even know what the fuck my face was doing at this moment.

So here I am, last minute, pushing out a cblog for the 8th anniversary badge.  I actually had this idea months ago, but I procrastinate.  I always enjoy when 10 Things blogs make a comeback, so on top of getting back into the cblogs for a bit, I thought maybe I could kickstart a new round of these.

I made this list on a kind of rough day, which is why it seems a bit darker and real than my normal personality.  Of course, if it were just normal stuff, you might already know them about me and what would be the point of that?

Jesus, I’m a shitty writer these days.  Totally out of practice.

1. NARPs and meetups are the only times these days when I really feel happy.

Don’t get me wrong, I’m not depressed or anything.  Most things in my life simply make me content.  I laugh at things and smile a lot and hang out with friends, but nothing ever fills me with as much joy as being around other people with the same interests and hobbies.  PAXes and NARPs are far and away the things that make me happiest these days, hands down.  If I could go to every NARP and convention every year I definitely would.  As a matter of fact, I hate NOT being at events so much that when I am unable to attend one, I ignore all news from it because it wrecks me that I am not there and Toneman has a two-player beer partner that isn’t me, or JJ is drinking scotch on the roof at 6 am with someone else, or someone else is being an asshole to Beccy and goddammit though I hope everyone is having so much fun.  I guess I shouldn’t say those are the only times I’m happy.  There’s actually a pretty great woman in my life right now that shows some promise, and I’m learning to deal with being an adult. But holy cow, those moments with Dtoiders are when I really, truly feel like I’m home.

2.  I’ve tried and failed at more things than most people have even attempted.

Cop?  Fucked that up.  Rockstar?  Spent a decade chasing that dream.  Games journalist? LOLOLOLOLOL  Literally any kind of college education?  I aced a philosophy class once. Remember Organ Donors and One Shots?  Let’s not even get into my relationship history.  Christ on a crutch, that alone could go on for days.  There’s probably a hundred first 20 pages of scripts/books/screenplays out there somewhere that I started and then stopped after 3 days.  This is kind of related to my next point…

Sometimes it’s an anxiety thing. I get perturbed by the hassle of entry and talk myself out of things before I even start them.  That’s pretty much the worst.  Anxiety is a fucking dick.  Twice in my life I’ve snuck away from parties to go ball my eyes out to a dog because I don’t even fucking know why.  Other times I’m just lazy and would rather play videogames or hey I need to learn to play a new song RIGHT THE FUCK NOW.  Sometimes I forget, but it’s mostly anxiety or being lazy.

Are you wearing Ed Hardy, Tap-out, or Affliction brand products? Is the bill of your hat straight, and does it maybe have the sticker still on it?  Yes?  Fucking kill yourself, you fucking douchebag.  I really dislike this part about myself, but it’s so damn hard to change.  I just get so agitated when I see certain shit.  Tons of bling or whatever, and an inability to speak clear English, ICP/Twizted fans, those shitty purple reflective sunglasses… those are just some things that set me right the fuck off.  I know we’re not supposed to judge a book by it’s cover, but when was the last time a book labeled Sailor Jerry and soaked in Bud Light was anything worthwhile?

Always.  Because I am.  Most of the time a logical path to the correct  conclusion is not hard to figure out, and everyone else is an emotional fucking idiot.

But mostly because I think gender stereotypes are annoying as fuck.  There was a girl I had class with once who wanted to be an architectural engineer… until the professor called her out on some shitty work (on an English paper, it was a 100 level class) and she said it wasn’t a big deal, she was just going to find a rich guy anyways.

On the flip side, I don’t like sports.  Never have, but spent about 25 years pretending so I could fit in.  In all honesty I think at this point they are fucking detrimental to society, but that’s a whole nother topic that you’d be wrong about and I’m not going to get into it right now.  So anyway, I don’t like sports.  I grew up in a tiny ass midwest town.  Friday nights meant football, so I pretended (with a bottle of grocery store Southern Comfort).  I hated it.  Even now as an adult, when people ask if I saw the game and I tell them I don’t watch sports, it gets awkward.  We could talk about AN ALMOST ENDLESS AMOUNT OF OTHER TOPICS, but nah, this guy doesn’t like sports.  I bet he plays with Barbies too.

I’d love to see a world where no topics, styles, professions, etc. had a gender assigned to them.  If nothing else, the world would be way less fucking annoying.

Side Note: Man, I swear a lot.

7. I wanted this job to go to parties.  Now I wish I was in a position to do more.

So did you know I’m actually the U.S. Community Manager here?  When I originally wanted the job Hamza was going to parties all the time, doing all that industry exclusive shit, reviewing games, and generally living the dream.  That’s what I wanted to do, man.  I can put an incredible amount of booze and other substances into my body, and I love to party.  Even thrown a few good ones myself.  I ran the midwest group for a few years and helped out Hamza whenever I could make it to conventions, then Andy Dixon must have sucked someone’s dick because he got the job when I should have.  After I damn near said fuck everything and table flipped the internet out of existence, I got on staff as Community Coordinator or some such made up title nonsense.  I basically stuck around and did what I could when I could, and when Andy got moved up he said I could have the old title.  Yay me.  I wish I could do more for the site though.  I still want to throw parties and host events, but I live in Toledo, Ohio and it is literally one of the 10 worst cities in the country.  Plus, my actual job pays shit (but hey I have insurance now!) so I just can’t afford to travel so many times a year.  Tell you what though, if I lived in San Francisco with the rest of the cool kids (even though Portland is in fact a way cooler city),  the amount of work crews they’d have to hire to rebuild the city after I burnt that motherfucker down every weekend would solve the unemployment crisis.  So yeah, I still want to party.  But I want to do it with all the Dtoiders, everywhere.  One huge lesson I learned was that I will never again go to an event party that the Destructoid members can’t get into.  I did that one time and that was enough.  You guys are what make me happy, and you’re who I want to be partying with. Because more than anything else I want you to be having fun, and if I’m really, really lucky, I might get to be a part of the reason.

8.  I’m principled to the point of fault.

There’s certain rules I abide by, and bend them for nothing.  A lot of it comes from having shit service jobs for most of my life.  I will not go into a restaurant within 20 minutes of their closing.  I will not wait in lines, because A) I hate lines and B) I’ve been on the other side and I know what it’s like when you have a line to the door and ONE MORE PERSON just had to walk in.  I have driven an extra 10 minutes to go to another Chipotle because the line at the first one was too long.  I can’t think of any other examples right now, but fuck you I’m tired.

The only real problem with that meme is that we had to make it fake gamer GIRL.  I’ve always thought this comic sums it up well.  I mean seriously, are you going to sit there and tell me everyone that ever dressed as Mario for Halloween is actually into it?  I don’t know man, I’m not the gatekeeper for “true nerdom” or whatever, but it pisses me off. I can’t stand being at the bar and seeing someone that slapped on a Star Wars tshirt because they heard my dive bar is pretty cool.  Don’t even get me started on the bar here that does an annual Nerd Bash.  Suspenders and thick rimmed glasses.  Yeah, that’s how we dress guys.  You didn’t know?

This might be pretty surprising, because of all the booze and poor life choices.  For some time now though, I’ve been working out 5 days a week and following a pretty clean diet.  I also eat few carbs, but that’s mainly because my diabetes is more manageable without them. Originally I just wanted to bang more attractive women, but now I’m kind of hooked.  The moment I noticed those abs starting to pop out I was sold.  I look fucking great naked, and work hard for it.

So I guess that’s it for now.  Maybe next time I’ll share the real reason I sold my first PS3, or the time I woke up with a girl in my bed and a pillowcase covered in blood.  Right now though, I hope this shitty, rushed, badge grab of a cblog entertained you, and with any luck will inspire more people do share 10 things.  If not, then fuck you.  I need to get to sleep so I can open my shitty job in the morning, and I still haven’t had today’s workout.