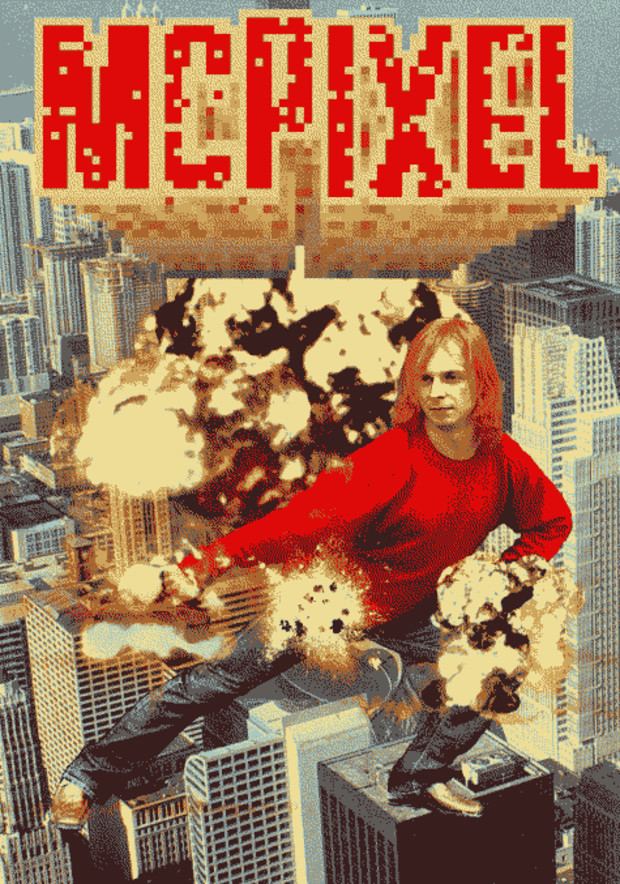 McPixel seems to have slipped past the radar a bit. There was a little buzz when the demo was released, but after the full version came out, nobody seemed to notice. Which is a bit of a shame, really, because this is quite a singular thing.

I like adventure games. Classic Lucas Arts like Full Throttle - Grim Fandango still remains "The Game" in my heart. Recent chaps like Gemini Rue or The Experiment. Weird oldies like Blade Runner or The Neverhood. Mostly forgotten titles like Zero Critical. Hell, I even put down money for both Momento Mori and The Next Big Thing. If your game involves pointing and or clicking then that's pretty much all I need to hear to secure a purchase.

As close as they might be to my heart though, they routinely break it. Adventure games are fickle, mysterious beasts, liable to be spooked away by the faintest spot of logic. I'm not going to push out a trite piece on the purported death of adventure games. You could easily find a thousand of those already, and each one makes me cringe. Genres don't just disappear. I'm sorry, they don't. That isn't how things work.

Which isn't to say that they don't have a point. Adventure games sometimes seem like they're almost inherently flawed. Much as I love Grim Fandango - and I love it with tongue - it's got big problems. In a game about a cool, smooth talking film noir protagonist who's down on his luck, trying to get by on his smarts, why exactly do we have a timed puzzle with a fork lift inside of an elevator where you have to line the vehicle up pixel perfect to an ill-defined area between floors?

There's not really anything left to be said about the infamous cat moustache puzzle in Gabriel Knight 3, but it's hard to take things seriously with that in mind. These are important games, don't get me wrong. They're a lot of things to a lot of people, but that doesn't mean that they aren't riddled with perplexing elements.

It doesn't just stop at a few ludicrous puzzles though. Take the first episode of Sam and Max. The first puzzle you encounter is that a mouse in your office stole something and he wants swiss cheese before he's going to give it back. You have a cupboard full of cheese, but it isn't swiss. So your solution is to shoot a bunch of holes in it with your gun.

Clever, and simplistic - adventure games excel when they have you using one or two items for lots of things instead of a billion items for very specific purposes. To take Grim Fandango as an example again, Manny's scythe gets used frequently, but only ever once as a weapon.

That on its own doesn't make a game shine, though. The first episode of Sam and Max is fairly dull, really. There's a convoluted plot about aging child stars being hypnotised, and a lot of contrived attempts at being wacky. My problem with it was that they were taking bizarre characters and placing them in an every day setting - walking down the street to go check out the convenience store doesn't become terribly engaging when you add a black man with hilarious costumes and a homicidal rabbit.

Still, you don't necessarily need much in the way of narrative to have something great, but adventure games are more often than not slow, lumbering creatures. When you have to spend twenty minutes concentrating on figuring out a puzzle, it's hard to fill the screen with gun shots and explosions, high octane car chase scenes, and sexy lady-folk doing sexy lady-folk things.

So with a slow burning position, they often delegate the job of keeping your attention to the story. After all, why should I bother messing around with a rubber duck and a window in The Longest Journey unless I actually care about the consequences of that?

McPixel, oddly enough, fixes a lot more of these problems than I'd expected it to. Each level is a different location where a bomb is going to explode in twenty seconds, and your goal is to avert that explosion before the time runs out. That's understating things a little, obviously; in one level you hand an exploding hot dog to a strange alien hiding behind some bushes smoking a joint who tries to eat it.

The twenty second time limit is the most important factor here. Most adventure games have you wracking your brain over a situation for much, much longer, and with more consequences. If I don't figure out how to get Manny on the boat in Rubacava, I'm never going to be able to catch up with Meche to save the girl and save the day.

Which works greatly in the game's favour. The situations are bizarre and surreal, and the solutions even more so. You don't have your traditional collection of verbs and enormous inventory. You can only move your character, or left click to interact with something, which usually defaults either to picking up an object or kicking somebody in the nuts.

That lack of verbs is another important quality; the puzzles are quick, as they have to be in a twenty second window. I'm not going to spend all day wondering what the hell to do with the cat moustache because instead I can just run up to somebody and kick them in the balls. There's never a point where you're not sure what to do, because everything is right there.

It still has an insane logic to everything, but it works to McPixel's favour rather than against it. Playing with remote controlled robot bunnies in Full Throttle when the game is supposed to be about a buff manly biker man doing manly biker man things didn't fit at all. In a game about a man running around hitting dudes in the junk, though, solving a puzzle by punching Han Solo in the face, sticking a light sabre in your mouth then flying along the death star, picking up an exploding R2D2 as you go, and dropping it to explode harmlessly on Darth Vader's face, well, it matches up.

That's the stand out quality about McPixel, really. It all fits together. Everything works perfectly. There isn't a cat moustache puzzle because, simply put, they're all cat moustache puzzles. Adventure games rarely pull of silly well, but here it's very neatly done. I mean, come on, how many times have you wanted to solve an adventure game puzzle by kicking dudes in the balls?
#ShareonCommunityBlogs
Login to vote this up!