12:57 PM on 06.13.2008 (server time)    0
OK, so Jim Sterling had plenty to say about 50 Cent on the front page story of 50 Cent's
new game. I had a few things to say about the matter too (much of which I regret as it
was unfair but was really just a general swipe at the world we live and not meant to be
personal - I got carried away) but I eventually came to wonder why Jim felt the need to
slate somebody who actually is running parallel paths... Or are they? It's fight night.

Sponsored and brought to you by the Podcastle. It's the nuts. Gets me through a
working day but by Friday, the effects have worn off and I'm snappy.

In the blue corner 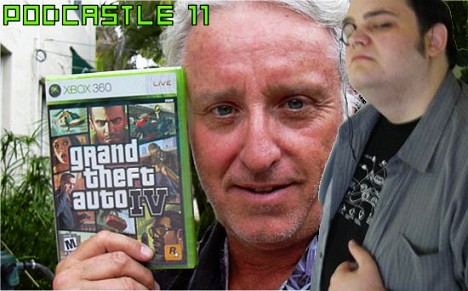 50 Cent:
Has a habit of slagging people off, often behind their backs in the recording studio,
although I'm sure his records are heard by the people he slates.

Jim Sterling:
Has a habit of slagging people off, often behind their backs (50 Cent, Jack Thompson). I
doubt they hear it or read about it.

50 Cent:
Fiddy loves women. In fact, he often raps about them and his desire for them to come to
his "candy shop" to take a look at what they've got. Women hear this and may feel
undermined.

Jim Sterling:
Jimmy loves women. In fact, he has been known to talk about moments in which he has
enjoyed looking at semi-naked girls at game conferences on his podcast. Women are
present at the time and other listening may feel under valued.

ROUND 3
50 Cent:
The man is thrilled at the thought of a game developer doing him a huge favour by making
games that involve him. He may not even like the finished product but he may hype it up
in any case, before watching it sell and raking $$$ in.

Jim Sterling:
The man is chuffed at the thought of a game developer doing him a huge favour by
sending him free games to review. he may not like the finished product but he may hype it
up in any case, before slating it and raking in internet hits.

ROUND 4
50 Cent:
He doesn't make the games, he only stars in them and wonders why so much hate is
thrown his way by hardcore gamers who feel he has no part to play in the industry so
should maybe shy away from making lots of cash.

Jim Sterling:
He doesn't make the games, he only reviews them and often wonders why people throw
him hate for not liking something and should maybe give games like GTA IV more than 8/
10.

ROUND 5
50 Cent:
Has gone from rags to riches by rapping about "bitches"

Jim Sterling:
Has gone from rags to Dtoid riches by writing about "glitches".

ROUND 6
50 Cent:
Is probably quite a nice bloke, but has a persona that means he is loved and hated in
equal measures. But that is just his job.

Jim Sterling:
Is undoubtedly a nice bloke, but has a persona that means he is loved and hated in equal
measures. But that is his job.

Both fighters appear to have a liking for grey pin striped clothing (above).

It's turning into a love fest in the ring as both contenders decide that they are actually
quite alike and should at least spare eachother the hate that they both clearly get on a
daily basis from others. You scratch my back and I'll scratch yours.

It's a draw and Jim recalls the story on his podcastle while 50 Cent drops him some props
on his new record and thanks him in the credits for his latest game, which Jim gives a
stellar review.
#Community
Login to vote this up!

OK, hmmmmm, where do I start? I guess I should start at the beginning of my gaming life. I'm talking summers spent in Clacton arcades wasting 10p's on Championship Sprint, Double Dragon and Turtles. I'm on about California Games, Daley Thompson and Winter Olympics... Aaaaaah, the C64 days, when I was but 5 or 6 years old, seemed the sunniest. I swear it was either bright sunshine soaked summer or just plain snow in those heady times.

Nowadays, like the weather, gaming has gotten complex... So much choice and so little cash.

In a house with many consoles and far too much gaming testosterone, I devote most play time to my PS3. I don't have a preference for game type, although I'd say FPS's float my boat the most and RPGs haven't grabbed me by the balls once, yet.