Stubbs the Zombie - undeath of a salesman. [Halloween Flashback #10]

I've had a long standing interest in all things zombie, ever since I watched a heavily censored cut of George Romero's Day of the Dead on grainy VHS. While I certainly wouldn't want to encounter a hungry vampire or a slavering werewolf, there's something about the relentlessness of the living dead that I find utterly terrifying. So it was something of a turnaround that, some time ago, I found myself joining the ranks of the living dead.

Admittedly, this was a case of virtual zombification, thanks to Wideload Games' third person eat-em-up, Stubbs the Zombie: Rebel Without a Pulse. And given that it's been nearly ten years since the game first clawed its way out of its grave, it seems an appropriate game to end my Halloween Flashback on. Released on PC, Mac and X-Box, the game cast you as the titular Stubbs, a formerly deceased salesman with a hunger for living flesh and the power to transform his victims into the shambling undead. 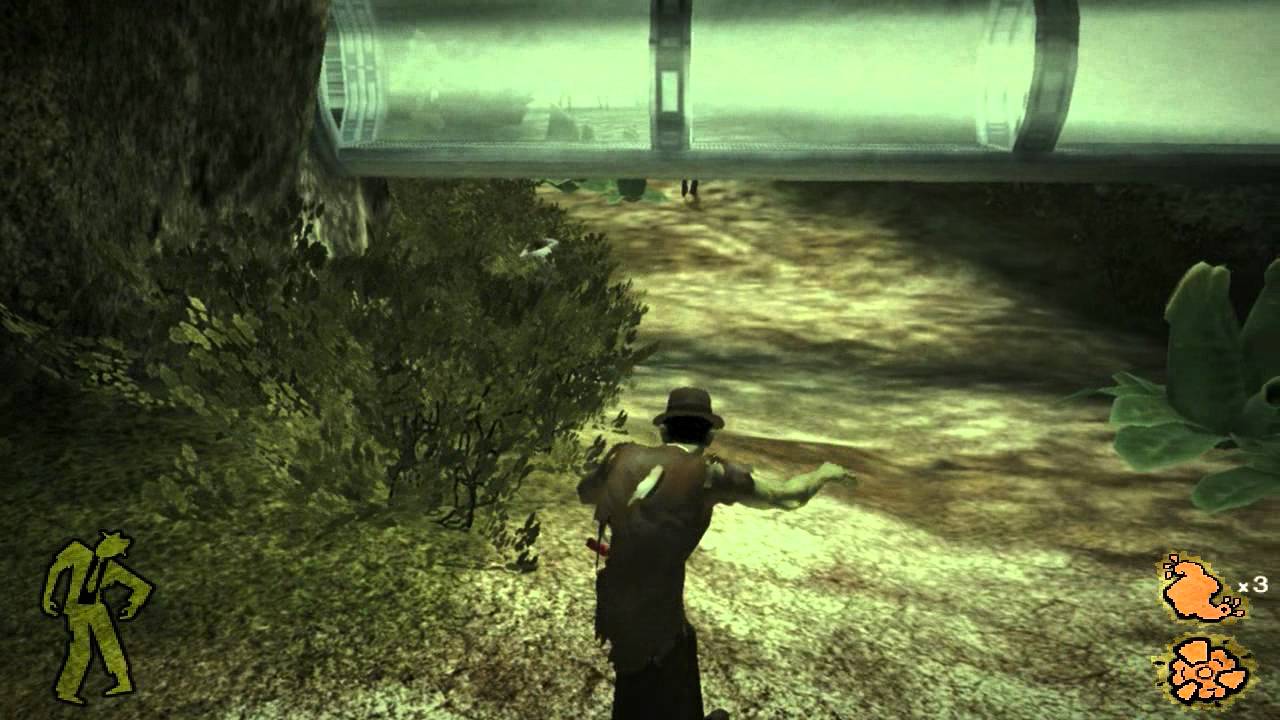 But far from being a gruesome, gritty slaughterfest, Stubbs the Zombie had a rather comedic tone. This probably helped it avoid censorship or cancellation, though it received some minor press attention when a US Senator accused it of encouraging cannibalism. The game eschewed a contemporary setting and instead took place in the 1950s. The premise was that an entrepreneur had constructed a utopian metropolis, complete with futuristic trappings such as robots and hover cars, right on top of Stubbs' grave. This, understandably, irked him somewhat, leading to our undead hero's rise from the grave and his subsequent rampage.

Or 'your rampage', rather, since you, as Stubbs, were tasked with turning this shining paradise into a dingy graveyard. You started the game off with a fairly standard set of attacks, although you gained additional abilities as you progressed. Initially you were able to dispatch the living by clawing at them with your rotting limbs, or sinking your decaying teeth into their head, resulting in a one hit kill. The latter only worked if you'd sufficiently weakened your enemies first or had managed to get behind them. Stubbs could also take a lot of damage before re-expiring, and you could also regenerate health by staying out of the firing line.

If the 'back off and heal up' mechanic sounds familiar it's because Stubbs actually used the Halo engine. Sadly, you didn't get to crack open Master Chief's helmet and devour his genetically enhanced brains, but maybe we'll see that in Halo 6. You did, however, have to deal with a whole range of foes who wanted to put you in the ground again, ranging from unarmed civilians through to policeman, soldiers and even a homicidal barber's shop choir. No-one said being a zombie was easy. 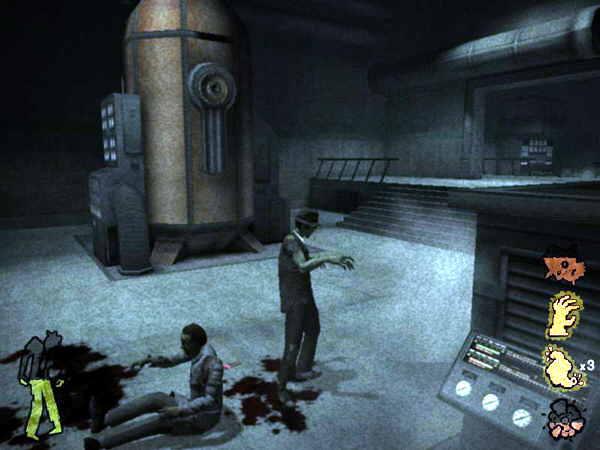 The grainy filter matches the game's tone rather well.

While you could take down most of these enemies on a one-to-one basis, in groups they would have proved problematic, were it not for Stubbs' ability to re-animate the dead, creating additional zombies.. Any enemy you killed, got up and killed. The people they killed, got up and killed. So you were able to gather a small mob of shambling corpses who would independently attack any enemies who wandered close enough. This was by far the most satisfying aspect of the game for me. I had to stop myself cackling and yelling 'Muahahaahaa!' as my horde went about their gruesome business.

That said, your zombies weren't the smartest bunch, as you might expect . You couldn't order them about directly, though you could literally give a zombie a shove in the right direction. They did tend to follow you around but you could also whistle for them if they wandered off – in theory, that is. In practice, Stubbs' whistling ability was twitchy at best - I found it so frustrating and hard to execute that I rarely used it. Instead, I typically used my zombie minions as cover, using them to distract my enemies while I waded in and did a little brain munching of my own. Your horde doesn't follow you from level to level, which is a smart move since it makes each level a challenge. If they did carry across, you'd likely be able to steamroller over all your enemies. I suspect the developers also adopted this approach to ensure that they didn't have to have hundreds of zombies on screen on time at the same time, slowing the game to a crawl.

Speaking of crawling, I have to give the developers series kudos for having the game's enemies and zombies take dismemberment damage. You can tear off an opponent's arm and use it as a bludgeon and your zombies can even lose their legs. The latter results in the aforementioned corpse crawling their way towards enemies, though I've yet to see a crawling zombie successfully sink their teeth in to an enemy. Though their sheer, relentless determination does bring a tear to my eye. Your zombies are also recognisable re-animated versions of your former foes.. So if you chow down on a high-school jock, the same jock will get up moments later, looking a little worse for wear, rather than having been replaced by a generic zombie model. I felt a kind of perverse joy as I saw that the same enemy who had been trying to kill me moments ago was now fighting alongside me.

Stubbs the Zombie did indeed have its tongue wedged firmly in its decaying cheek, and the game contained plenty of off-colour humour. Your foes regularly delivered a range of quips, even as you were sinking your teeth into their heads, and some of the cut-scenes had me laughing like an idiot. There was even a section of the game where you had to pee into a reservoir in order to overload the town's dam, sending forth a yellow tsunami which engulfed the city. The game also saw you laying waste to a range of other locations including, amongst others, a shopping mall, a science lab and an old farm. The latter was one of my favourites because it meant you could roam the rows, Children of the Corn style, dispatching enemies and then disappearing back into the corn. 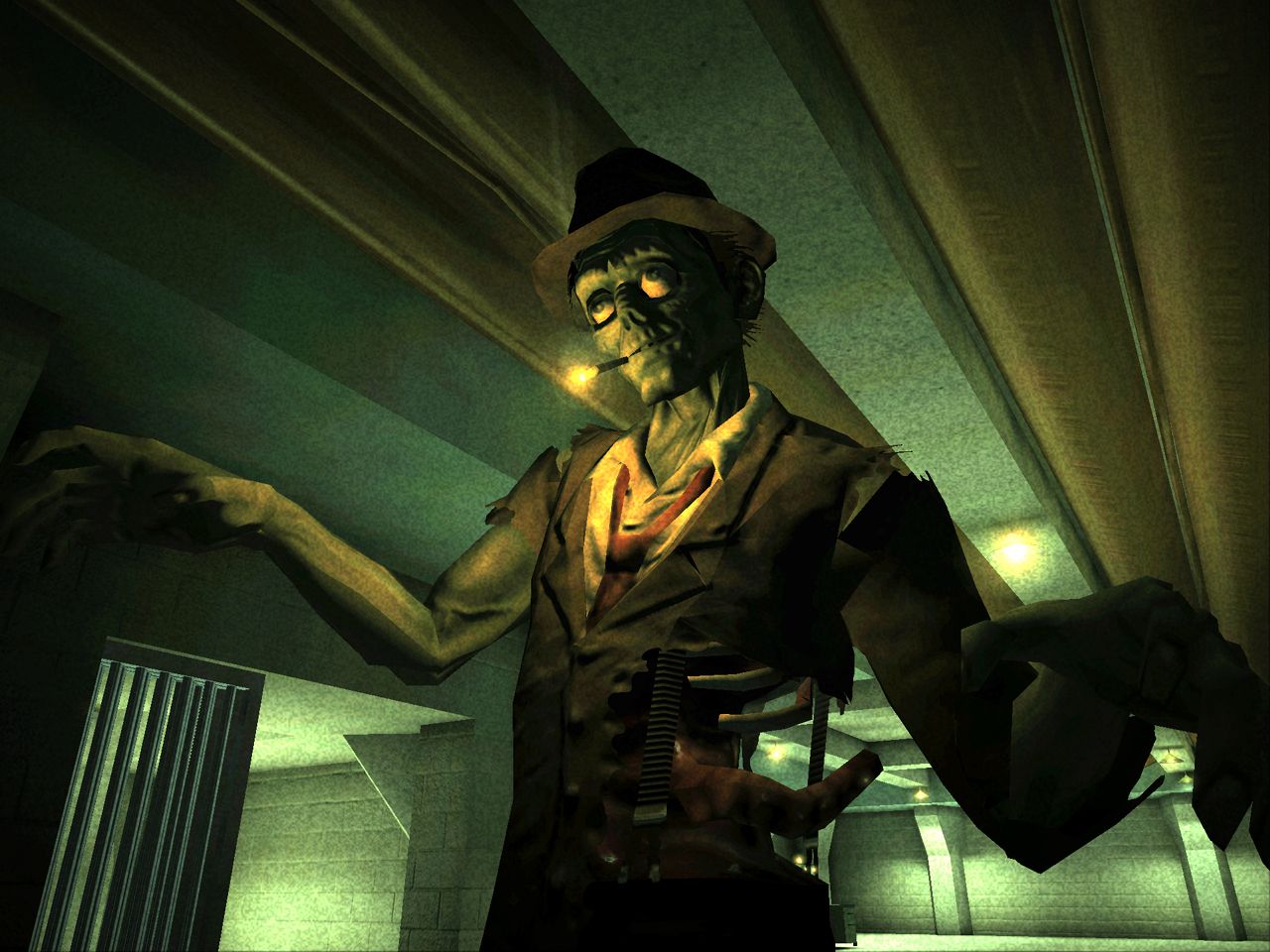 If I had one complaint about Stubbs the Zombie it was it that was too short, and there was no sandbox mode to add replayability to the game. While you could tackle the levels again on a higher difficulty level, I feel that letting you just roam an open area of the town, without any real goals, would have been a enjoyable addition to the game. There was a rather cool split-screen mode on the X-Box, though it was sadly missing from the PC version.

Stubbs the Zombie was a joy to play, challenging but satisfying in equal measure, and was an essential purchase for any fan of the zombie genre. In fact, it's one of the few games that I feel honestly deserves a sequel and I would gladly pre-order a copy right now if a sequel were announced. Now for the bad news – that's probably not going to happen. The game is no longer available for purchase through Steam or any other online stores, and the company behind it was absorbed into Disney Studios. Till then, if you happen to know where to get a copy, then Stubbs the Zombie is well worth digging up.

And that's it for this series of Halloween flashbacks. It's time to lay to the series to rest, crudely dismember it and bury it a crossroads with a bulb of garlic in its tattered maw. If you're looking to check out some of the older titles than GOG.com and Steam are great places to start. I'll still be writing other articles on my blog and who knows – I might resurrect this series next year. Till then.. braaaains!