You do not have a "right" to stream games

The release of Persona 5 has been soured ever so slightly by Atlus' old-fashioned decision to block direct streaming through the PlayStation 4. They have even gone a step further, putting out an official statement advising which parts of the game can be broadcast through capture software and the like, and which will run the risk of the streamer encountering a copyright strike.

Quite understandably, this approach has been met with some confusion and a boatload of criticism. Some of the complainers, however, have come close to saying they are entitled to stream all the games they own: either because it's how they earn a living and they have relied on being able to do so, or because it's their property to do with as they please. This felt "off" to me, so after sifting through my thoughts, I decided to write a longer piece on the issue.

Sorry to disappoint you, but you probably don't have a "right" to stream your games.

What is a "right" to stream?

When we're talking about a "right" to stream, we are saying that by legally acquiring a copy of a specific game, we acquire not only the physical game or the download, but the ability to use it in specific ways. Not only that, but we can insist on doing these things, and defend ourselves/seek remedies if we are stopped from doing these things.

I'll give you an example. Say my shiny new copy of Persona 5 arrived yesterday and I was dismayed upon finding out about Atlus' stance when I pressed the Share button on my DualShock 4. I might tell my Twitter followers of my sadness that I can't show the game to my streaming fanbase. That's a weaker form of criticism, which doesn't claim that Atlus owes me anything or must alleviate my disappointment. If I were instead to insist that I have a right to stream, I am going a step further, saying Atlus has wronged me; they have a duty to allow me to stream. It could even open the door to legal claims, if Atlus' policy stops me from making money as a streamer through donations or ad revenue, though it would just open the door to these kinds of complaints, not guarantee a win.

A game as property

A lot of the irritiation stems from the gut feeling that "this is my property and I can do what I want with it". That is true, but with caveats. Having ownership over something generally does entitle you to exclusive use of the object in any way you want, but with consequences of course if you use the product illegally.

However, with media products, there is an exception to this. It makes sense that you can use media however you want, unless it circumvents the need for others to obtain ownership or mere possession (through renting) of the media by giving them to another for their consumption. In other words, owning a copy of something does not trump copyright laws that apply to the work as a piece of intellectual property. That's why you see those notices at the beginning of retail DVDs saying that the film/TV series is for personal consumption only, and why there are also piracy warnings.

As has been noted elsewhere, Japan is even stricter on this point, with the videogame rental market being strangled by heavy regulation. This is possible because the ability to rent out the media is not a core element of being an owner of a media product. Instead, renting is something that is allowed by the company because it helps their bottom line, but they don't have to allow it. We'll return to this argument later.

Let's take a journey back to around 2008, when the idea of uploading footage of mindless adolescent screaming was but a twinkle in Felix Kjellberg's eye, and Twitch was something you went to the doctor's for. I remember watching gameplay clips uploaded onto YouTube and having the same thoughts as I did with illicitly uploaded anime or TV: is this legal?

Essentially, streaming allows people who may not own a copy of the game to see it without buying or renting it. On the face of it, that looks like a breach of copyright. Before streaming became widely practised, many a company may have had a sit-down and considered whether to handle this through copyright strikes or whether to embrace it. Indeed, Nintendo limit the ability to make money through streaming through the rules of its Creators Programme, so some bigger companies think the marketing advantages in supporting uncontrolled streaming aren't worth it.

Granted, there are some valid criticisms of copyright takedowns, particularly when they are used against review videos.

"But many companies tolerate it!", I hear you cry. In fact, some companies do their own streaming in advance of a game release, such as Sega of America prior to the release of Yakuza 5. This may be so, but it is still, on the face of it, a breach of copyright for you to stream a game. It is a tolerated and even actively encouraged breach (meaning that companies wouldn't have a leg to stand on if they decided to sue you after tolerating it for an extensive period of time), but it is still, under its surface, a copyright breach.

Treating games the same as movies/TV

The counter-argument to this is that it crosses into the dangerous territory of treating games exactly like film and TV. Streaming can't genuinely be a copyright breach, because a person watching a stream can never get the whole experience of playing the game, while there is no difference whatsoever between watching a film in a cinema and watching a film uploaded to YouTube.

However, I'd argue that this depends on the individual consumer and the game in question. When some people experience games, they are more oriented towards the story than the action. Anecdotally, there was a time when I couldn't play games because my schedule at university killed all of my free time, so I would watch Let's Plays while revising for exams. I always wanted to know the story behind games so I could build up my knowledge of the gaming scene; I knew I would probably not get the chance to play games for a long time, so it was the next best thing. Hence, while Let's Plays were great for me as a means to build up my videogame knowledge while being unable to play them, the way I made use of these videos was probably closer to the viewer of a film uploaded to YouTube.

I watched a full Let's Play of Alice: Madness Returns while preparing for mock exams in my 2nd year of university. I've since bought my own copy, but never got past the first section due to finding the gun combat unbearably awkward.

It also depends on the game you are watching. Experiencing a shooter through streaming is far removed from getting the full experience, while a person who streams a visual novel probably has very little need to go back and play it themselves, unless the streamer misses a lot of dialogue options. I have a lot more sympathy with people insisting on their right to stream, say, a Call of Duty game than with people insisting on their right to stream Ladykiller in a Bind.

Some people might claim this is still unconvincingly, because most streamers/walkthrough constructors/Let's Players etc. add an extra layer to the game they are actually playing. A walkthrough is meant to be informative and help people out when they get stuck; streaming and Let's Plays add witty commentary or, at the very least, thinly-veiled dick jokes on top of the original content. This is ultimately why the games industry ended up embracing the practice, combined with being beaten into submission by the sheer amount of people using their games in that way.

This is actually not as stable an argument as some might think, in my opinion. For one, the "fair use" doctrine doesn't apply universally; it is specific to US copyright law (with recent adoption by Israel, Poland and a couple of other countries), though some content creators outside the US mistakenly refer to it as applying to them, regardless. Similar doctrines such as "fair dealing" do exist in other countries (such as the United Kingdom and Commonwealth nations), but it tends to have a much narrower application. Anyone who has a vague idea of how the law works must know that law from another jurisdiction doesn't just automatically apply everywhere.

Some states are notoriously strict with copyright; anyone who enjoys music and lives in Germany will be aware of the years-long wrangling with the GEMA ("Gesellschaft für musikalische Aufführungs- und mechanische Vervielfältigungsrechte" - a performance rights organisation) to watch even the most bog-standard music videos on YouTube, which finally came to an end when GEMA negotiated an agreement with YouTube in November 2016. As already mentioned, Japan is extra sensitive to the issue of copyright breaches. 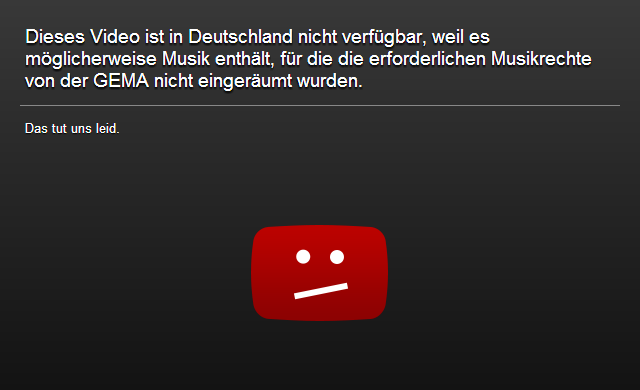 Also, "fair use" isn't the catch-all doctrine everyone tends to treat it as; it needs to be used carefully. It does indeed normally cover satire of, and commentary added to, original works. But what is substantial enough to count as adding to an original work? For example, some Let's Players say very little and stay quiet for huge swathes of the game they are playing. Others, such as Markiplier and Pewdiepie, go full theatrical and are popular because they do pour their own personalities into the games they are playing. Again, it is not as simple as leaning on the "fair use" argument to justify a right to stream.

So, we can't criticise Atlus at all?

A quick summary of my argument: the streaming industry is built on the marketing-sanctioned ignoring of copyright laws. It helps companies for the fanbase to build the hype over their games for them - it reduces the amount of PR professionals they need on their payroll, so they're hardly going to bite the hand that feeds them and issue thousands upon thousands copyright strikes. This is unless they are brave enough to state that they don't need that type of publicity, or wish to exercise some control over it, which is what Atlus and Nintendo have done respectively.

This is all to say that when individual companies do turn round and block you from streaming, they have not scammed you or stolen your rights. But is this behaviour immune from criticism? Absolutely not.

As I stated in my earlier piece, I think there are good reasons for Atlus to do this and I respect their desire to curate the experience that players are going to have with Persona 5. To be honest, the statement they released yesterday does come across as a bit pompous because it is so specific in its rules; it goes from a top chef making the effort to create an excellent dining experience for his customers, to serving them food off the backs of their hands. However, people are free to criticise Atlus and to disagree with me. It is quite quaint to treat streaming expressly as a copyright breach, even if that's always what's going on under the surface. The industry has moved on, and being a stick in the mud in this regard might harm you when other companies encourage their fans to spread the love through streaming and Let's Plays.

Ultimately, though, you can't demand consequence-free streaming from Atlus. Being able to stream is a privilege, not a right, and it's not a good look on gamers to act otherwise.