More than just noise: Let me get on my soap box...

4:43 PM on 09.20.2010 (server time)    0
[First, a disclaimer: This isn�t about video game music. Heck, this doesn�t even have anything to do with sound. I�m just having some wordplay fun with this month�s topic. Hopefully you find it interesting, informative, and a little thought provoking. If you don�t, then at least I�ll know you have spent a couple of minutes reading my blathering, and those few minutes are like oxygen to a narcissistic person like me.] 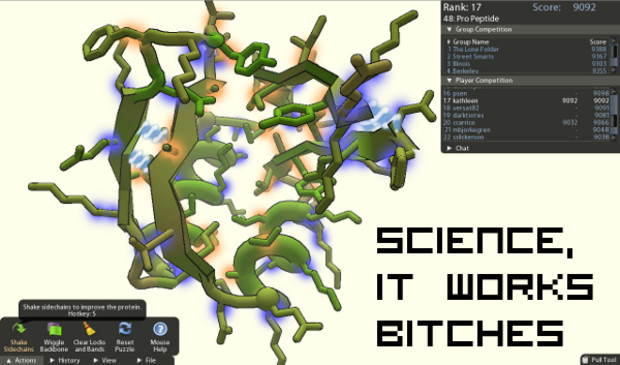 Two professors at the University of Washington, David Baker and Zoran Popavić, know how powerful that incentive is. They created Foldit, a game where players attempt to figure out the three dimensional structure of proteins. They took the core concepts that govern protein shape (hydrogen bonds, electrostatic interactions, and several others) and abstracted them to a basic set of rules. Biochemists aim to minimize the energy required to hold a protein's shape together while players aim to maximize their score by doing the same thing.

The Foldit creators have succeeded in taking a complex task that could only be tackled by specialists and made it approachable to anyone familiar with a puzzle game. Even more surprising is that high ranking players can find a solution that surpasses current computer algorithms for solving protein conformation problems, both in terms of accuracy and speed. Knowing the structures of these proteins helps scientists across multiple fields of biology, from cancer research to neuroscience. Ever since the result of Foldit�s success has been published in Nature (a highly regarded scientific journal), the research community has taken notice of gamers' insight.

Evoke and Foldit have both engaged thousands of players, but thousands is still just a small sliver of the population. Is it possible to have a socially relevant and noble game reach hundreds of thousands, possibly even millions of people at a time? Even game companies that regularly produce blockbusters struggle to regularly achieve those numbers. The ESA and other organizations, however, are not only searching for a game that satisfies both criteria, but are offering grant money to aid in their development.

Though the United States is an industrialized nation, it's been struggling in STEM (science, technology, engineering, and mathematics) education in children. One of President Obama's education platforms was not only to improve their knowledge, but also to renew their interest in those fields. The National STEM Video Game Challenge, which issued a press release only a couple of days ago, is one such way to do so. The contest calls for developers to �design mobile games, including games for the mobile Web, for young children (grades pre-K through 4) that teach key STEM concepts and foster an interest in STEM subject areas.� I can personally vouch for educational games and their impact on my decision to choose science as my career. However, I didn�t know many people that had both a PC and a copy of Turbo Science. By focusing on mobile gaming, the contest removes the hardware/software barrier of entry. Kids can be exposed to these games in their schools, and should they enjoy it and want to play more, can go their library�s computer lab and continue to play.

Let me state that though these games have gotten positive results thus far, it is by no means concrete evidence. Optimistic as I am, I need to see proof that these projects are even capable of their lofty ambitions. Show me the results of the Evokation that resolves to transform a squatter village of 20,000 in South Africa into a sustainable community. Show me the scientists who cite Foldit as instrumental to their research when they discover a cure for Alzheimer�s Disease. Show me test results and science fair projects after the ESA finds, funds, and distributes their games across the country. For all we know, all of these projects could fail.

But that�s not what I came to write about. I�m here to highlight that even the possibility of any of these goals is far beyond what designers could comprehend at the genesis of gaming. Pong may be a pop cultural landmark, but it meant virtually nothing to the American public. Today, some designers are banking on their games stirring about change in other sectors of society. Even the slightest increase in correlation will be a milestone because it signifies that games are can no longer be written off as frivolities. They've finally transcended to a higher level, where they can be considered more than just noise.
#Community    #OpinionEditorial
Login to vote this up!