It was a Sunday evening for most of you, Monday morning for me, when we were met with the most unfortunate of news. That on the previous day, July 11 2015, Nintendo President Satoru Iwata passed away. In the wake of his passing, some members of our community took the time to pay their respects.

It was due to his attitude about work and his love for his career that made his games great and I both respect and admire his work.
- The efforts of him and the people he worked with has brought much joy to Agent9 through the years.

Mr. Iwata produced many of the games I grew up with, games and memories I will treasure forever. He has taken me on adventures to faraway places, and let me escape the real world to live in worlds he brought to life.
- TuxedoKnight

Iwata is pretty unique amongst game CEO's arguably due to him being the only CEO that most gamers actually know his full name … you had to respect the fact that he got up and put his face on his product every time.
- Forgotten Bastion remembers the things that made him stand out.

Your company and fans cherish you
So despite us feeling rotten
We will remember you Iwata
Gone, but not forgotten
- TheLimoMaker writes a short poem.

It takes a lot of guts to expose yourselves in such a silly way to the gaming world, but Iwata knew that deep down, it was always about that fun loving innocence, that which has made Nintendo such a big hit for families and gamers for years now.
- His humility and humor, which carried over to the company image they tried to portray under his leadership. That's what KiiWy will remember him for.

As a developer, designer, and the president of gaming's de facto name, Nintendo, Iwata worked tirelessly to further the medium; he championed the cause of making and ensuring fun, undeniably enjoyable, games were accessible to all who wanted them.
- A fan of Earthbound, wutangclam believes that simply enjoying the games he worked on is already a way of honoring his legacy. 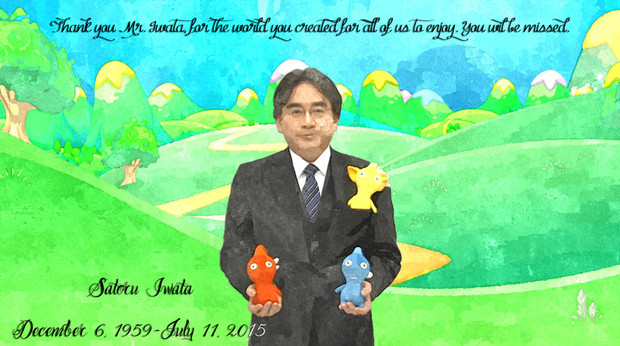 You can tell they love what they're doing and that they truly are gamers. This was especially true of Iwata as, whether he was dressing up as Luigi or "fighting" Reggie, you could tell he was having fun doing this.
- MannySJ remembers his contributions to the gaming industry.

I'm not going to list my favorite Nintendo games or do anything trivial. I'm just going to ask [that you will remember him for what he did].
- Spazzh20

I believe, with every fiber of my being, that video games are art, and that everyone involved in the creation of a video game is an artist.
- Spykes dedicates a short story to him. 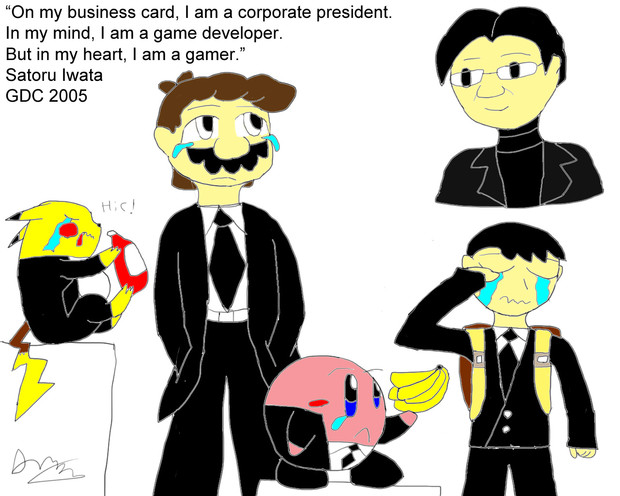 - Though admitedly not much of an artist, Dreamweaver was compelled to draw.

You never thought of Satoru Iwata as a CEO. You thought of him as the slightly kooky face of Nintendo who stood for one thing and one thing alone: fun. For everyone.
- Out of the many public figures we have lost this past year, it was this one that has affected Nes Richmond the most.

Through the personality Mr. Iwata created, and all the jokes and weird humor that he showed in all the presentation, he became a larger than life figure. He wasn't only the CEO of Nintendo, but also the guy holding the bananas, the guy surrounded by Luigis. He became another Nintendo character, one that will live on in our memory.
- Lord Spencer notes the things he admires about Iwata as a person.

Iwata was an amazing developer. That he was a developer first and a CEO second always shined through his demeanor. He loved games, he never forgot where he came from and took the initiative to shine a spotlight on his employees.
- Pixie The Fairy spends her final recap to bid him farewell.

While I can't really claim to be the most passionate fan of the man or his works (but I most definitely enjoy them), my heart goes out to those who are. That his death has evoked this kind of response, that he has touched the lives of so many people. I can rest assured that he was a great man, and that his departure is a great loss. The words, the pictures, the thoughts you have shared. May they serve as a testament to the joy and blessings he has imparted to the world.

(I took the liberty of including Agent9, Dreamweaver, Nes Richmond and Lord Spencer's blogs despite not being published on 7/13)

The History of EVO (Part 1): B3-EVO 2002
* - Virtua Kazama takes us through the tourney's roots, from back when it was called "Battle by the Bay" to the time they started going by that familiar moniker.

It's nice to see most of these events preserved in VHS-quality recordings. 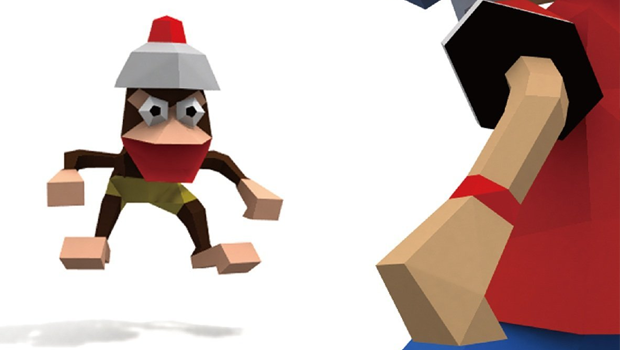 A - Preorders ain't all bad! TuxedoKnight shares some things he likes about them.

A - "Could the solution to the problem of terrible PC ports and sketchy, performance-reducing DRM be to embrace the horrors of capitalism and find ways to make them work for us?", Chumble Fuzzly asks in his discussion on Kickstarter, paid mods and branded ports.

B - Better with Cage. Seymour is thoroughly enjoying the stupidity of Omikron: The Nomad's Soul, Quantic Dream's very first game.

S - Calty gives us another look "Inside The Slit".

C - It seems like the social-political criticism in gaming as of late has done quite a number on Keurof, in trying to get involved in it and seeing bad from either side of the issue.

I - On his first year anniversary of blogging, Riobux (re)introduces himself and does an AMA.

N - CommanderZx2 shares a short update on that survey about kids, gaming, and gender, which has garnered quite a bit of controversy as of late.

R - TheLimoMaker reviews all the Call of Duty games. This first part covers the first two games and its spin-offs.

T - Manchild contemplates on the "Cynicism Loop", the way our pessimism and general tolerance towards things waxes and wanes through various stages of our lives. Right now, he's back in that numb, "Oh well" phase.

T - DSBraid questions the purpose of all those mundane "Go find my buffalo"-type chores you do as side quests in plenty of RPGs.

T - As unfortunate as Iwata's passing may be, it does beg the question "Who will be the next Nintendo president?" RadicalAjax weighs in on some potential candidates.

Sorry for the lack of tweets for the recaps of 7/8-11. They still made their way to Dtoid's other channels, though. Recap tweets will resume starting from 7/12's.

Side note: This day has set a new record this year for "Most blogged day" at 26 blogs (includes 1 promoted blog).