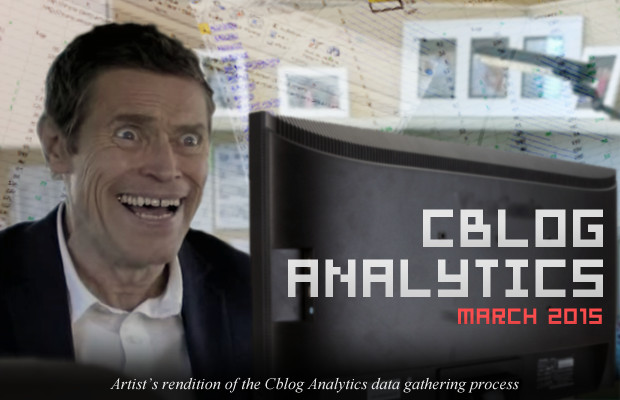 And so another month of blogging has passed. I gotta say, as my first time doing it, creating last month's entry ended up being a rather tedious and time consuming task, to no one's surprise. Opening the Excel file every other day. Inputting new data from the day(s) that just ended. Rechecking the previous days for errors and updates. Miscounting because someone posted a new blog when you refreshed the page in the middle of recording. Feeling depressed when you realize that your brain lapses in some occasions and skips the number 15 while counting… And that this is a problem you've had ever since you were a child…

...analytics! So this month, I've decided to only work on these once a week now. It sure helped alleviate some of the stress brought in by the previous way of doing things. As always, I'm all ears for anyone who can think of a much better way of doing this.

A total of 335 blogs were posted this month!
At the time this post went up, 8 of those blogs have been promoted to the front page!
- That's less than last month's 341 blogs & 16 promoted blogs (current record highest).
- 1 blog from January and 3 from February were also promoted during this month.

(Consult the monthly recaps for the list of promoted blogs: The Dtoid community's best blogs of March 2015!)

The Cblog Recap team was able to post 33 recaps this month!
- Includes Monthly recap, Analytics and Podgasms.
- Recaps, along with this very blog post are not included in the total number of blogs and all the other stats that follow.
- For curiosity's sake, the 28 recaps have accumulated a total of 491 comments and 453 faps.

Among those members, may we congratulate TheDustinThomas for posting the most number of blogs at 14 blogs!
- New highest for the year.
- That's 3 more than Mr. Hoffman's (currently RH666) total of 11 last month.

There were 3 monthly musings or any community assignments of any sort for the month of February. This month, we had 2 monthly musings topics, prompting 13 blogs to be written!

(Consult the monthly recaps for the list of monthly musings blogs: The Dtoid community's best blogs of March 2015!)

Note: I shall display stats that both include and exclude the promoted blogs, with the latter being the "default". For the former, the promoted blogs will be documented as part of the day it was originally published.

On average, there were about 10 blogs a day!
- 1 less than last month's 11 (12 if you count promoted blogs)(current record highest). 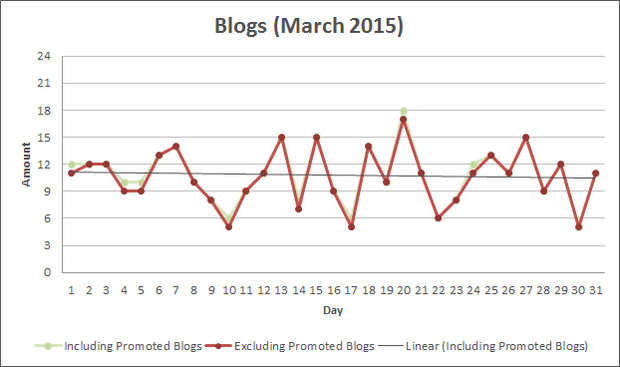 Last post of the month: The worst thing about censorship is ███████ - 041 - Coca-Cola

The most commented day was Tuesday the 3rd, with 303 comments!
- Lower than last month's 479 (current record highest).

The most commented blog was Dtoid's 9th: My 109 French Girls by Roberto Plankton, with 130 comments!
- Lower than last month's 137 (current record highest). 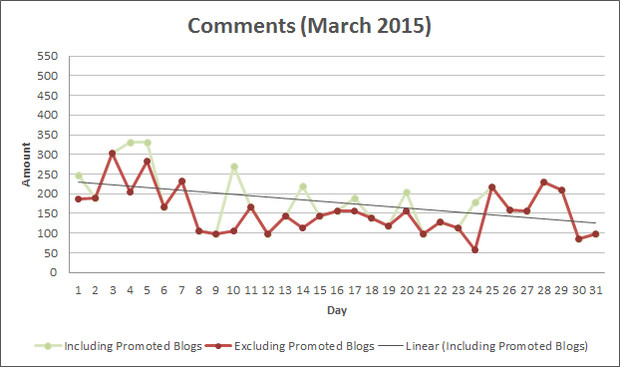 The most fapped day was Tuesday the 3rd, with 157 faps!
- Lower than last month's 204 (current record highest).

Other most fapped blogs of this month:

Note: In the interest of saving on space, we're only listing down the top 13 most fapped blogs (should be 10 or some other round number, but there are ties) We'll change the criteria on what is shown here according to what's appropriate for that month. Commentoid, Monthly recaps, Analytics and other community "features" not included.

47 - 9 Dtoiders I'd Like To F**k
46 - Occam Thoughts: 9
43 - Career Interview with Phil Ken Sebben of Sebben & Sebben
28 - Career Interview with a Literal Shield
27 - Termina Destroyed in Daylight Saving Mishap
26 - You've once again stepped into the world of fuckin' nerds
26 - The Shit Box volume 2: Never Belieb Never
25 - New Opportunities Thanks to Old Friends.
25 - Destructoid Announces Bible Burning Game Jam
25 - Cold William and the Nifty Nine +1
*23 - Do not spend your tax refund at GameStop
23 - A Masterclass in Art: The Legend of Roberto Plankton
23 - Sick & Tired of Being Sick & Tired. 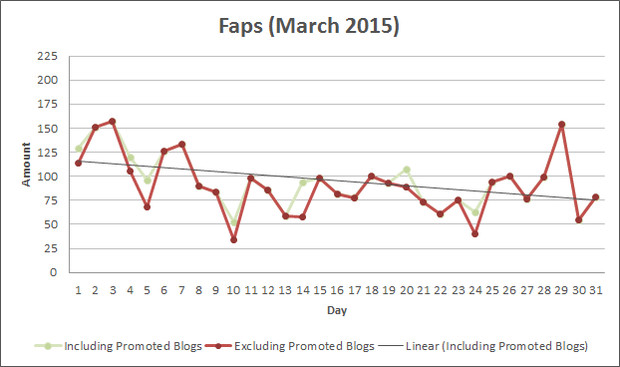 This month did not enjoy the same level of activity we had in the previous month. Though the final blog count is close to equal, February had three less days than March, making the daily average smaller. Lower scores all across the board. With that said, when blogging activity is concerned, I'd say March was… so-so!

Always do take note that the actual quality of the blogs posted this month are an entirely different subject matter, and that the data displayed here cannot and should not be used to measure that.

Regardless, here's hoping this April will be much better for the Cblogs, and the entire community as well. But don't just hope. Be better ♪