As expected, working on this has been a lot less of a hassle than it was on the old spreadsheet I was using. Like last month, it only took around 2 hours to record everything. Back then, it took around 2 hours every week. That really freed up some time for me to improve on other aspects of this. I've decided to do some trimming and rearranging, which even opened up room for some additional stuff. Saved a couple of lines by removing those "last month, it was ___" bits in favor of a simple up/down arrow with how much the stat increased/decreased compared to last month's. Also removed a few whitespaces and moved the Cblog Recap Team stats to the very bottom. However, I also added list for the most commented blogs and a more detailed note on why I separate the promoted blogs. Reviewing this post, the length ended up to be more or less the same :P

There was something else I was planning to change. However, I was not able to finish or even fully conceptualize it in time for when this post needs to go up. Something for you guys to look forward to on the next edition, I guess ♪


Note: It's been decided that the Monthly Recaps, and the Bloggers Wanted and Band of Bloggers prompts are no longer counted in the tally of promoted blogs. New counts are as follows: Feb - 14, Mar - 7, Apr - 6, May - 3.

This month, we had 2 monthly musings topics, prompting 22 blogs to be written!
Bloggers Wanted: Hype & E3 Predictions - 17
Band of Bloggers: Open Range - 5
(Consult the monthly recaps for the list of promoted and monthly musings blogs: The Dtoid community's best blogs of June 2015!)

Among those members, may we congratulate Manchild for setting the new record for most frequent blogger at 17 blogs! (↑6)
- Previous record: TheDustinThomas - 15 (April).

Most frequent bloggers of the month (arranged alphabetically for ties):
17 - Manchild
12 - OverlordZetta
11 - SeymourDuncan17
11- TheKodu
10 - ScreamAid
9 - James Internet Ego
8 - RadicalYoseph
8 - TheDustinThomas
6 - Dreamweaver
6 - KiiWy
6 - n0signal
6 - Pixie The Fairy
6 - TheLimoMaker
(For the number of entries in these lists, I try to cap it at 10, letting it go over a bit if there are ties.)

On promoted blogs: Because they receive much greater exposure once it gets promoted to the front page, I've decided that it is best to exclude the promoted blogs from all the stats from this point of the blog onward (except for the most commented/fapped blogs lists). While it also means disregarding the comments/faps they've obtained before they got promoted, I believe keeping them in would bloat the perceived level of activity we have in the Cblogs that these very analytics aim to tell us (and it would be too much of a hassle to keep a separate record of its data before and after it got promoted, since I have no control on when that would happen). Promoted blogs are still documented as part of the day they were originally published, to contribute to the "most/least blogged day" stats. For curiosity's sake, how certain stats would turn out if the promoted blogs were included are available as a sidenote. 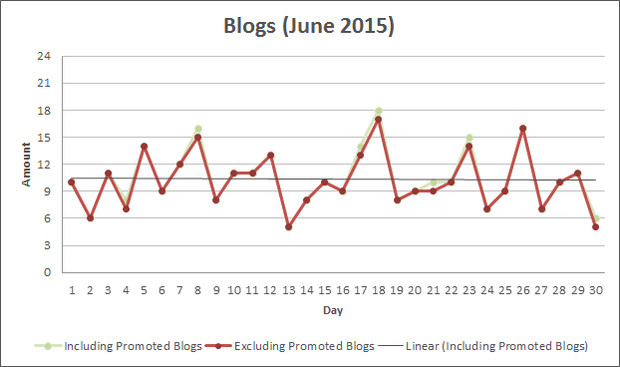 If we were to include promoted blogs however, the most commented blog would be An open plea to Square Enix: Don't remove FFVII's turn-based combat by Sephzilla, with 681 (!!!) comments, which may as well set the record for the rest of the year. I believe he deserves a special award for this. 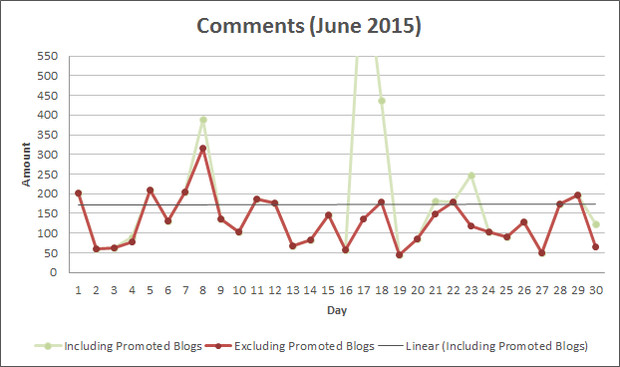 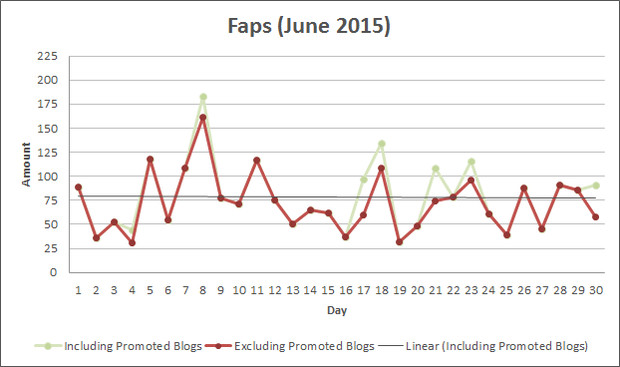 - Cblog Recap Team Stats -
29 recaps were posted this month, accumulating a total of 320 comments and 283 faps!
*Includes Monthly Recap, Analytics and Podgasms.
*Posts by CblogRecaps were not included in any of the stats on all the previous sections.

I don't really have much to say about this month aside from it being a pretty good one. Higher numbers all around (I do think those colored indicators help in making that more apparent). Much better than the last two months which was quite a low point for the Cblogs for a number of reasons. We had quite a number of "blanks" this month though. Plenty of blogs were left with not even a single comment and/or fap. And very few participated in our musings topics :( (The "Hype" topic was revised so that E3 prediction blogs would retroactively count under it as well) Perhaps a better and more constant reminder of these prompts may help it gain more participants. I'm inclined to think a lot of people didn't even know there was a call for blogs under those topics. But overall, I think we're getting back on track. July is starting out pretty well already, and I'm hoping that the recent restructuring among the staff and the new additions to the community team would also mean a greater effort to promote the community blogs. Literally even, as in I wanna see more blogs get featured on the front page. We can't leave it all to the staff or community team, of course. Gotta make great blogs of our own!

Also, wanna peek on how I make these? I'll start sharing the file I use. But I'm locking all the sheets. Bet you can't guess the password ;)

As always, feel free to give comments and suggestions on how this can be improved.

- Luna Sy (You can follow me on Twitter if you want to: @l_unaSy)
Image source: これはこれであり | kounog [pixiv]