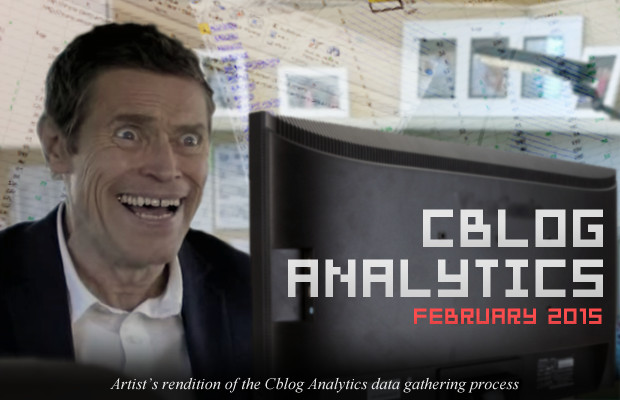 About three years ago, some brave soul decided to take up the arduous task of creating analytics for the community blogs. It lasted until August of the same year and no one has picked up the mantle ever since. Because who in the right mind would agree to the prospect of having to manually count all the necessary data required from every single blog that gets published from then on out.

Sometimes, I'm not in the right mind.

So long as time permits, we're bringing back the monthly Cblog analytics, if only to sate one's curiosity on how well the Cblogs have been faring, especially compared to how it was in the past, considering all the (hopefully mostly positive) changes that have happened and are happening as of late. I tried my best to cover as much information as I possibly can given all the other responsibilities I must attend to, and hopefully, as we go through more iterations of these, the process of making these can be made less stressful and more efficient. And hopefully involving more than just one person.

A total of 341 blogs were posted this month!
At the time this post went up, 16 of those blogs have been promoted to the front page!
- That's more than last month's 311 blogs & 8 promoted blogs.
- 14 were promoted this month, the other 2 were promoted on the month after.
- 1 blog from January was promoted during this month.

(Consult the monthly recaps for the list of promoted blogs: The Dtoid community's best blogs of February 2015!)

The Cblog Recap team was able to post 28 recaps this month!
- Recaps, along with this very blog post are not included in the total number of blogs and all the other stats that follow.
- For curiosity's sake, the 28 recaps have accumulated a total of 374 comments and 333 faps.

Among those members, may we congratulate Mr. Hoffmann for posting the most number of blogs at 11 blogs!
- That's less than TheKodu's total of 12 last month.
- That's the same number as KFC's secret herbs and spices.

There were no monthly musings or any community assignments of any sort for the month of January. This month, we had 3 monthly musings topics, prompting 32 blogs to be written!

(Consult the monthly recaps for the list of monthly musings blogs: The Dtoid community's best blogs of February 2015!)

Note: I'm not yet entirely sure how to handle the promoted blogs so unless there's any oppositions or suggestions on how to make it better, I shall display stats that both include and exclude the promoted blogs, with the latter being the "default". For the former, the promoted blogs will be documented as part of the day it was originally published.

The most blogged day was Monday the 2nd, with 22 blogs!

The least blogged days were Thursday the 12th and Sunday the 15th, with 6 blogs :[

On average, there were about 11 blogs a day!
- 12 if you count promoted blogs. 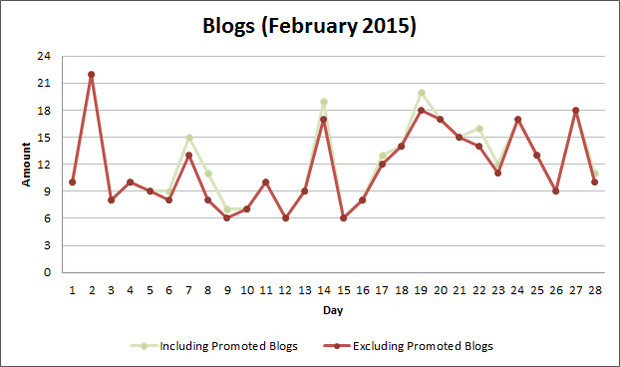 First post of the month: GTA V on PS3 is not Outdated

Last post of the month: A View From the Middle

A total of 5697 comments were posted on the Cblogs this month!
- 6838 if you count promoted blogs.

The most commented day was Tuesday the 2nd, with 479 comments!

The least commented day was Sunday the 15th, with 40 comments :[

The most commented blog was My Top 9 Dtoiders. And a few more. Just a few. Kinda. by gajknight, with 137 comments! 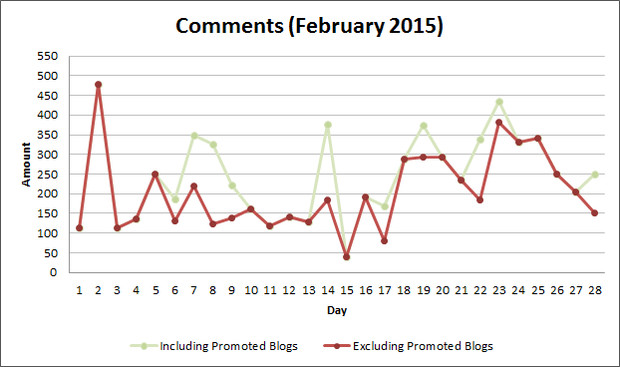 18 blogs went through the month fap-free :[

The sluttiest blog was The Official Shade List of Cool People: I got 99 Dtoiders and you are one! by ShadeOfLight, with 50 faps!

The highest number of faps in a single blog is much lower than last month's (with Hamza's goodbye blog raking in 72 faps). However, 51 blogs (including promoted ones) received at least 20 faps this month! To put things into perspective, last month, only 24 blogs reached 20 faps and above.

Other most fapped blogs of this month:

Note: In the interest of saving on space, we're only listing down the blogs that received 30 faps or more. We'll change the minimum according to what's appropriate for that month. 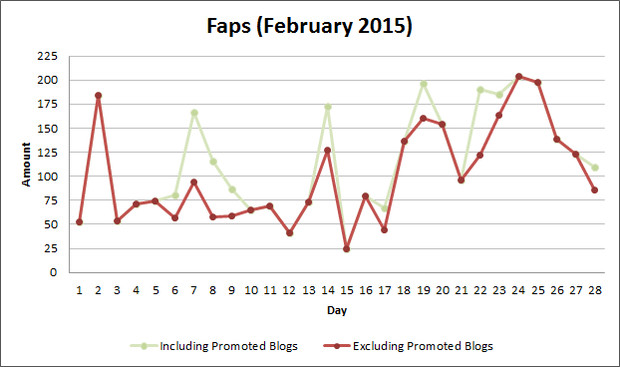 If I were to make an observation, and this is sorely my personal opinion, I think this has been quite an impressive month. With our only point of reference being those 2012 analytics, when comparing it to that year's "best" month (April 2012), you can notice that most of the equivalent stats for this month are almost close or even much better. There are certainly much less blogs being posted nowadays, but the level of activity within those blogs are much greater. There's a higher concentration of faps and comments and less blogs are left unnoticed. Though you could say that with there being less blogs, each blog is naturally given much more time in the spotlight before newer blogs come around and push them down the shared space and into obscurity. I for one think that the increase in activity still overpowers the decrease in the number of blogs. Do take note that both these months enjoyed a sudden surge in activity due to some topic that's bound to bring in lots of love from the community ("10 things about me" for Apr 2012, "Dtoid's 9th anniversary" for Feb 2015).

These are all statistics and are of course not necessarily representative of the actual quality of the blogs. But nevertheless, you did great this month, blogging community. Keep it up ♪