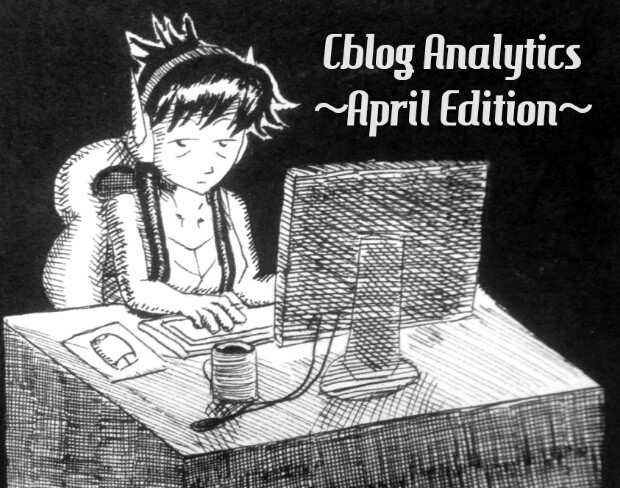 In this edition of Cblog Analytics, we're having a two-part special to catch up on the previously uncovered month of April. I save the "thoughts" portion I usually write at the bottom for the second part, combining my thoughts for both April and May.

After not working on this for the previous month, I've realized just how dragging and time consuming these analytics are, with the kind of setup I currently have. Because the existence of this feature hinges on one's will to actually make it, I decided that finding a way to further simplify and automate the task of creating analytics is necessary for it to continue. I remade the entire Excel file I use to record data. One major improvement this one has over the previous version is that it now includes a master table of all the blogs and its necessary details, which must still be filled up manually. Only now did I realize the the benefits having a master table and recording all of one blog's info right away before moving to the next one. The previous version was set up such that you had to run through the blogs several times for each type of data you wanted to record, one pass for comments, another for faps, etc. Finding and replacing errors was also a hassle in the previous scheme, because without a master table, the data for one blog is spread across multiple tables. You lose track on which value belongs to who and often have to repeat the count for that particular day and data type again.

Now, counting all the blogs/comments/faps for each day, as well as filtering out the recaps and promoted ones on a separate count. It's all automated now, together with the totals, averages and charts. Other non-automated data are also made much easier to obtain, with the ability to sort and filter the master table. Filling up that single, though more detailed table is much more convenient than filling up multiple smaller ones, expecially since on the latter, each cell requires me to type a formula of sorts (I went for the daily totals right away). This time, it's all just single pieces of info. What took me around 2 hours every week (because I also had to update and double check) now takes me 2 hours in just one session. In theory, the new spreadsheet along with this analytics post can now be accomplished all in a single day (or two), at the end of each month.

Most of all, in the event that I am gone or can no longer work on this, anyone can continue making this with relative ease.

I still hope for the day that we can obtain these analytics without any human input at all.

A total of 290 blogs were posted this month!
At the time this post went up, 7 of those blogs have been promoted to the front page!
- That's less than last month's 335 blogs & 8 promoted blogs.
- This year's current record is 341 blogs & 16 promoted (February).
- 2 April blogs were promoted on May and 1 was promoted on June.

(Consult the monthly recaps for the list of promoted blogs: The Dtoid community's best blogs of April 2015!)

The Cblog Recap team was able to post 30 recaps this month!
- Includes Monthly recap, Analytics and Podgasms.
- Recaps, along with this very blog post are not included in the total number of blogs and all the other stats that follow.
- For curiosity's sake, the 28 recaps have accumulated a total of 444 comments and 300 faps.

Among those members, may we congratulate TheDustinThomas for posting the most number of blogs at 15 blogs!
- New highest for the year, beating his own record 14 last month.

This month, we had 2 monthly musings topics, prompting 15 blogs to be written!

(Consult the monthly recaps for the list of monthly musings blogs: The Dtoid community's best blogs of April 2015!)

Note: I shall display stats that both include and exclude the promoted blogs, with the latter being the "default". For the former, the promoted blogs will be documented as part of the day it was originally published. 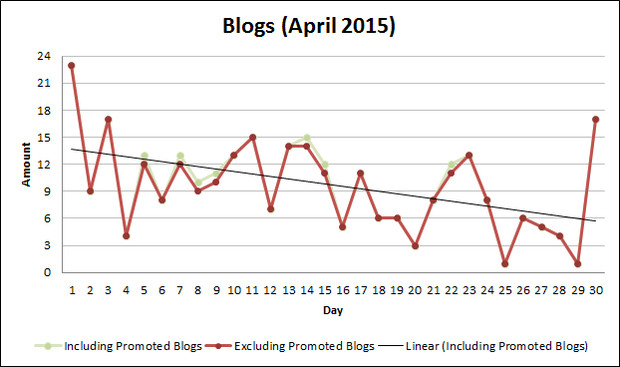 The most commented blog was I love you all and that’s why I’m retiring from Dtoid by mrandydixon, with 168 comments!
- Higher than last month's 130.
- New highest of the year (Previous record: 137 (Feb)). 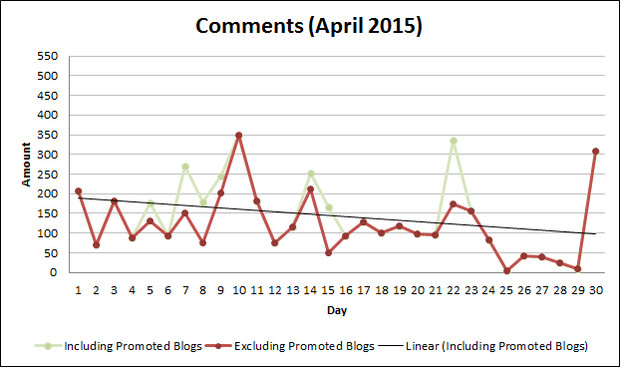 The sluttiest blog was I love you all and that’s why I’m retiring from Dtoid by mrandydixon, with 108 faps!
- Higher than last month's 58.
- New highest of the year (Previous record: 72 (Jan)).

Other most fapped blogs of this month:
Note: In the interest of saving on space, we're only listing down the top 10 most fapped blogs. We'll change the criteria on what is shown here according to what's appropriate for that month. Commentoid, Monthly recaps, Analytics and other community "features" not included. 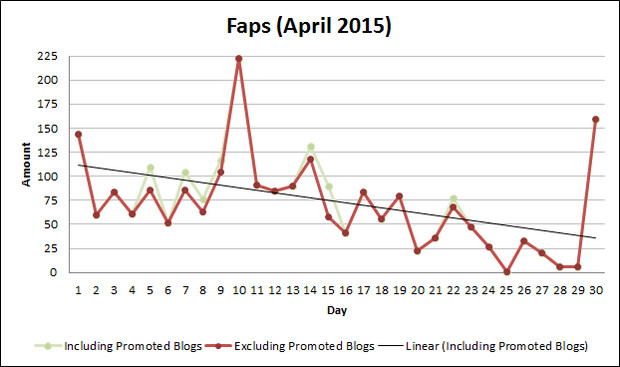