So full disclosure up front here: I didn't really care for Red Dead Redemption. It was ok, but man it just felt like Grand Theft Auto but in the wild west. The world was huge but kinda bland, and once the thrill of hunting and skinning animals and finding those incredibly hard-to-find treasure spots wore off, it was just an open-world game that took forever to get around in. I don't hate it; I don't love it. It's just there, and I have no interest in returning to that world.

But, I do believe that the series has some potential. Instead of seeing the game follow a mostly stand-up protagonist, I think having the main character be more of an outlaw would be a lot more fun. You could still do heroic things from time to time, and there could be some growth in the character's arc, but I think the wild west fantasy is way more powerful with someone who's kind of a dick as the central figure.

I was thinking about this yesterday as I listened to a really obscure musician I found way back in the day. I used to manage a record store, and would often go through and buy obscure shit based entirely on the album cover. I would never know anything about the artist or their music; it was more fun to find an attractive cover and hope for the best from there. That's how I found John Bustine. 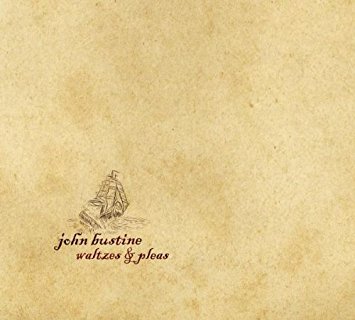 Sorry for the grainy quality on that - Google only has one image result for it. Crazy, huh? It's just a tan background with a small ship on the front. It's simple, and it somehow found its way to me. I bought it. I listened to it. And I fucking loved it.

I'm not a big country music guy, so how this country/rock hybrid sound found its way into my soul remains a mystery. But man, this dude is good. The tracks are pretty up and down and largely depressing in tone and lyric, but he's just got a great voice and awesome sound about the whole thing. One song in particular made me think of Red Dead; it's a haunting little ditty called "Pensacola."

This song is somber and tells a really dark tale, and while I'm pretty sure it doesn't take place in 1800s Texas, it totally could. I think the narrator in the song would make a fantastic main character in a Red Dead sequel, and the story itself would be a great setup. I don't know if the narrator is a bad person or one that just made a huge mistake at a low point in their life, but damn if this song isn't a hell of a mood-setter. It's dark and ominous, and I think it would really go well with the western motif.

If you're reading this, Take Two (which, you're not), please put John Bustine on your soundtrack. Thank you.

T - Please give a warm welcome to Professor Dillyball, who has just written their first blog! For their debut, they reflect on PS1 games from their childhood. Ah, to be young again. Give this a read, and welcome them to the Community!

T - Shoggy gives his thoughts on some game compilations that disappointed him. The Silent Hill HD Collection only having 2 and 3 was definitely a weird one. 1 should have been in there, for sure, and 4 deserves another chance. Damn you, Konami!

L - Luckrequired draws inspiration from a British man who thinks he can out-America the very American hero Iron Man. He has thusly built his own jetpack, and uses it to visit video game worlds. It's really real!

? - MDSW poses a question regarding VR centers. I'm not entirely sure what a VR center is, but I'm guessing it's somewhere you can play VR games?

Don't kill any priests. Be the best you. Write me a letter.