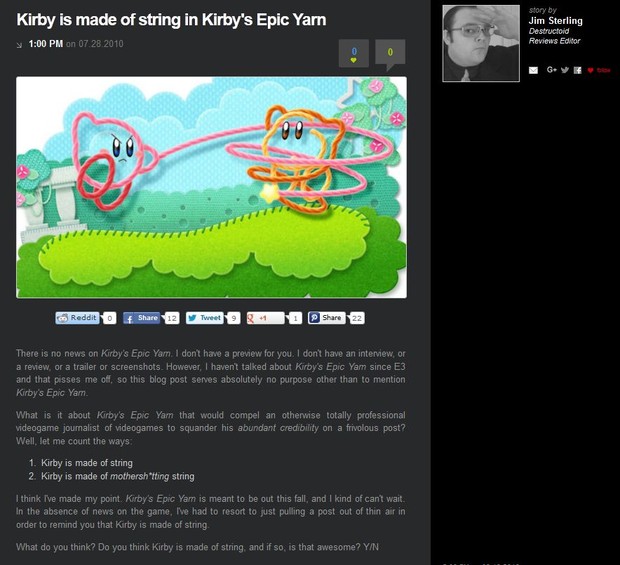 What strikes me with this article is one thing, and one thing only. The pure excitement on display. Here we have a grow man, a self-described “fat cunt”, and he’s being giddy like a schoolgirl for a game in which Kirby is made of string. So giddy, in fact, that he just went “fuck it” and wrote a news post for no other reason than to show how giddy he is.

I do feel that we haven’t seen as many of those kinds of articles lately, and that’s a great shame. Fuck the people who complain that it doesn’t have any news value. Fuck the ones who think the game looks kiddy. Fuck everyone. Just be excited about Kirby being made of mothersh*tting string again. While I don’t think it would help much for the people who think the industry is getting too negative, it would mean the world to me.

That’s what I want to see more of. Let’s just be excited for the sake of being excited again. Let’s not focus on being less negative. Let’s focus on being more positive. And again: let’s start having fucking fun.

* - See, this is what I mean. There's this upcoming game called Data-Fly, and GameSlinger explains why we should be excited.

* - This blog. This blog right here. There's so much truthiness in here. Thanks for writing this, Dixon.

* - Of band names and trippin' white people. It's Occams' interview!

A - It's no secret that I love me some Let's Play. This article provides an interesting look at some of their deeper aspects.

A - A list of the best wrestlers in video games and no Hawlucha? That will not do at all!

A - Are we still allowed to complain about spoilers after a long time has passed? Dagiarrat thinks so.

A - We've been getting a lit of insights into the gaming lives of Latin-Americans lately. It's interesting stuff, but kind of depressing.

A - Just a quick look at what Sigfried has been up to. Some nice choices in there.

A - Our resident Pixie shares some creepy things in video games. I'm still bothered by the fact that the Happy Mask Salesman just casually has an ancient artifact of  doom and destruction with him...and then manages to LOSE IT.

A - Another great look at how to handle spoilers in reviews, this time by kingsharkboi.

C - Yo. You wanna win some awesome and vaguely Halloween-themed games? Like Dark Souls? Damn straight you do. So what are you waiting for, enter Wrench's contest! (also holy shit I'm using Contestoid)

C - Not so much a contest as first-come first-serve. Codes for Talisman: Prologue!

T - GTA Online sounds like a fascinating science experiment. Fortunately, DapperMouse learned a thing or two from it.

V - The peoples of the Scary Granules share a toast review and Pokemon who just need to go away.

N - There's a nude model of Ellen Page in Beyond. She's not amused.

T - Some more thoughts about GTA Online; some problems with the Mission system.

T - I'm convinced: Hatoful Boyfriend is the best game ever.

- I know some people are going to be pissed at me for this. To which I say "how the hell can you stay mad at that song?" It's just not done.

Look at all dem great blogs up there! just look!

- ShadeOfLight
May you always find water and shade