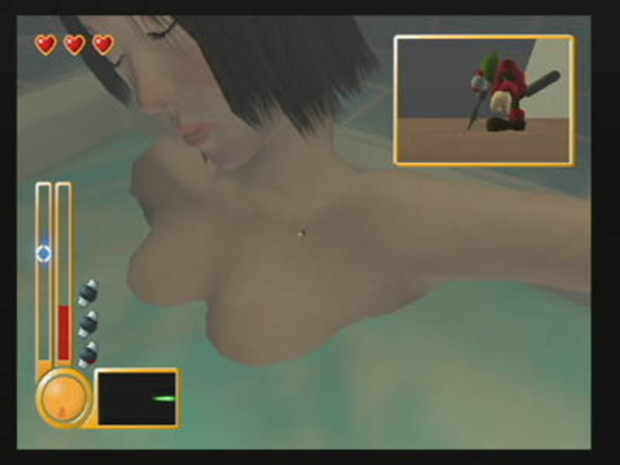 Even games about mosquitoes have sex appeal.

As for the game, it's pretty challenging and it can be fun to go back to older levels to try and beat your times. There seem to be some cheap moments though; I can't seem to figure out if there are any warning signals for when a human is about to slap you, instantly killing you. I'm sure there must be some way to avoid it, but it seems to me like it's just a random occurrence. The graphics and voice acting could probably be better, but there's still a certain charm to it for me. There are also some very hilarious cutscenes and dialogue, which are always entertaining, such as the game's warning that it contains "graphic depictions of itchiness."

I just love that weird games like this exist! :)

* - It seems Solar20XX has finally found some things he likes about Destructoid and the community here. As a result, he's offered up a nice intro blog!

M - TheKodu went to the UK Gadget convention, and was disappointed that the gaming section seems to have gone downhill. The convention did provide some Fanny Wang, at least!

A - LogicallyDashing tosses in their thoughts on the Wii U, specifically about Bayonetta 2 and Nintendo TVii

A - Cynic without a Cause discusses the difference between Fans and Fanboys, using the Bayonetta 2 debacle as an arguing point

E - Weekend Wankfest! It's like Friday Night Fights but not on Friday! Head on over and throw in some games you'd like to play over the weekend!

I - Say hello to Wade Molyneux! His first post might be kind of worrying, so let him know what we expect here on the Community Blogs

T - lbizz continues his reviews of the PAX10 indie games with Splice, a really interesting puzzle game that may have been too difficult for him

R - CheapBossAttack reviews Lollipop Chainsaw. It seems like he enjoyed it!