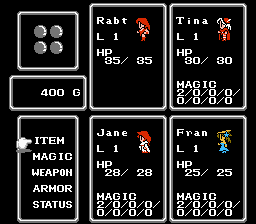 Famicom/NES: The original. Simply a great version marred by multiple bugs, some of which still haven't been fixed to date. Critical hit rates on weapons, INT doing nothing, SABR/TMPR doing nothing, LOK2 actually *increasing* enemy evade, running algorithm being screwy, 1/201 bug, weapon characteristics do nothing, among over a dozen more bugs. And yet, this is one of my favorite entries in the series. Balance issues made the Thief useless, the Black Belt better than the class changed version (Master) because it gets more magic defense (a stat that is NEVER shown in any remake of the game), and the Red Mage/Wizard is far superior to the White or Black Mage/Wizard due to magic not scaling based on any stat. If played right this can be beaten in like 2 hours or less, especially if you manage to find a way to abuse the 1/201 bug.

MSX2: Never played it. No interest in doing so. The amount of changes isn't huge it's the ones that they DID make that matter. The Monk/Master becomes useless without a weapon thus defeating the point of having one.

FOMA: Never played it. Unsure if it's possible to do so. Stupid obscure Japanese exclusive cell phone. Incidentally one of the "systems" that got a remake of Final Fantasy Adventure as well.

Wonderswan Color: This is the good shit. Multiple bug fixes. Quality of life improvements. Better graphics. Faster battles due to enemies having the bouncing numbers instead of damage showing up in text boxes in combat. Most of the quality of life improvements can be turned off. This is one of the best versions of the game to ever get released. Sadly this is the one that adds cutscenes that can't be skipped to add plot to the game.

Playstation 1: A port of the WSC version. Adds an Easy Mode that changes how much EXP is required to gain a new level, increases your max level to 99, allows all mages to get up to 99 spell charges, reduces item costs, among other improvements. This is possibly the most accessible version to play for people who don't speak Japanese. This is also the first version to get released outside of Japan. Released in a set with Final Fantasy 2 outside of Japan.

Game Boy Advance: This is where the remakes go to shit and/or massively improve.

On the other hand the Easy Mode of the PS1 version is put to shame by not only making it easier but making all the changes mandatory. The bonus bosses are basically damage sponges. Extra dungeons are random floors that are kind of boring to play through with normal enemies that don't really get interesting or challenging until late into the last two dungeons. Some of the new equipment options are overpowered as fuck (Red Wizard exclusive sword that casts Holy, that's not broken). The easier to gain levels aren't really counteracted by making enemies more difficult, just some extra HP and magic taking into account their intelligence as well.

This is either my least or most favorite version. It depends on the day of the week.

PSP: Take the Game Boy Advance version and add a new dungeon that's kind of fucky. Add in some boss that gets more powered up the farther into said dungeon you go. Add in some extra new equipment that breaks the game even further. Then outside of said dungeon add in some sort of filter that obscures parts of the screen and you have a better and/or worse version of the GBA version. The spell animations being changed for the better helps this one. This for some reason was never released on PSN in the US, but to my knowledge was in Europe and Japan. This makes this version impossible to legally play on Vita. Also contains a bug that blows away anything in a previous version. If you hit the L or R button while equipping an item to move to the next character just as you hit the accept button you'll equip that item on the next character, whether they can equip it or not. And if you have memory cursor on, you can equip weapons as armor or vice versa. If this happens it takes the index number of that piece of equipment and puts it as either weapon or armor depending on where it would go. So if you equip a Knife into your helmet slot it'll turn into Leather Armor that is in your helmet slot. This can be broken VERY easily and very early (Hammer turns into Knight's Armor).

iOS: Take the PSP version and make it into a touch screen controlled game. Don't bother. Second worst version due to poor controls and UI changes that makes the game frustrating to play.

Android: Take the iOS version and remove any of the GBA or subsequent versions additions without returning the pre-GBA advantages.

Pixel Remake: Oh god this is complicated. I'm going to tear this one down differently than the above versions.

UI issues: Run is multiple button presses away from where the cursor starts making escaping from battle more frustrating than it needs to be. Exit game is put deep into the configuration menu. Bestiary is put on the main menu only.

Combat: Enemies don't seem to have AI scripts any more so you can get screwed by enemies randomly casting overly powerful spells in no particular order or limitations. Enemies no longer have set formations or sizes meaning you can run into groups of 7 Golems (which were previously considered large enemies so they could only have 4 per fight). Magic doesn't seem to have a range of damage any more, leading to some monotonous situations. Evade building spells don't seem to stack but thankfully others seem to work still.

Graphics: Outside of the text being difficult to read or ugly, the graphics actually look pretty decent. The enemies being in formations they weren't in originally can have them stack up weirdly, but that's not game breaking.

Overall I'd rank PR somewhere between the GBA version and the MSX2 version. I have no idea where this version stacks up to be honest. There's multiple mods being worked on and once I look into it I might work on it as well.

Final Fantasy 1 Randomizer: This is for the NES version and is one of the most feature intensive randomizers I've run across. The people behind this are incredibly dedicated and knowledgable. If you can put up with some of the jank of the NES version this is easily worth the time. Added benefit: You can take the FF1 ROM, run it through the randomizer and end up with a bug fixed version without any randomization. This is the best way to play the NES version.

Final Fantasy HMS Jayne: This is for the GBA version. This has come a long way and will hopefully continue to see more and more updates. The people behind this version are quite talented and deserve more attention.

Approaching Chaos: This is also for the GBA version. Was actually released before HMS Jayne and has not seen a new release in years. Works but is missing a lot of features. Not worth using any more.

Final Fantasy Randomizer for PSP: This is for th... you know what it's for. Missing a lot of features from the other versions. Still worth a shot though if you want to play the PSP version.

The amount of changes randomizers can make to Final Fantasy 1 make the game really good option for people looking for a quick randomized playthrough.

I know this isn't really something that anybody directly asked for, but here it is.