Hollow Knight is a metroidvania developed and published by Team Cherry on PC in 2017 and on Switch, PS4 and Xbox One in 2018. It follows the journey of a nameless knight as they explore the ruined bug kingdom of Hallownest and meet other explorers and find whatever remains of the dead kingdom. 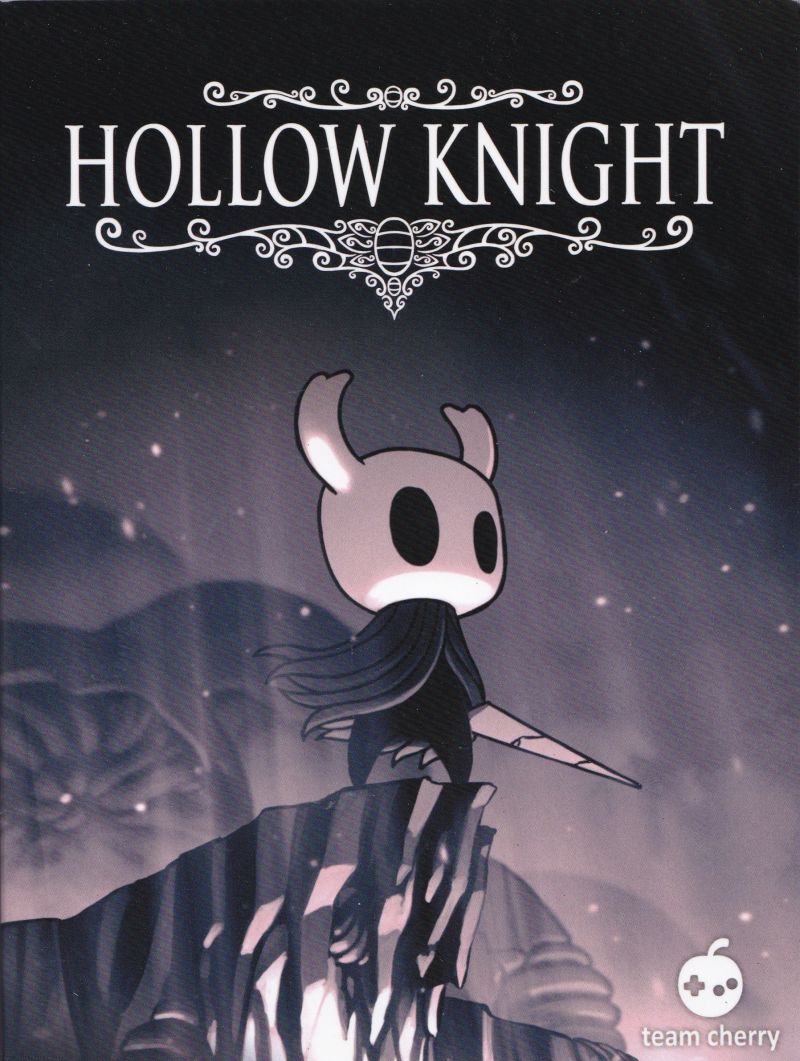 The Fate Of Hallownest

It's clear from the outset that Hollow Knight borrows the setup of a Souls-game (exploring a ruined kingdom) for it's story. As such, it is somewhat predictable for someone who has played those games before.

But, this is a metroidvania, so it's more about the journey than the destination. The game is essentially a mood piece full of neat things to learn and discover as you meet a great cast of bugs that come in all shapes and sizes. There is a main narrative, but it's certainly not the focus. But all the small pieces connect, so the various story elements do not feel random or out of place. It's a joy to stumble upon a bug and listen to what they have to say, be it silly or profound. Everyone is uniquely realised and given enough written dialogue (layered with gibberish grunts) to be memorable.

This approach is helped immensly by the presentation. The music is often sad and downtrodden with the odd hectic outlier during bosses. Combined with the fantastic art on display in the detailed sprites, we get what feels like a dark childrens' book come to life. It's frankly amazing what they manage to do with layered backgrounds, shadows and high-quality sprites.

A Small Bug In A Big World

A game like this lives and dies on how fun it is to explore, so I'm glad to say that Hollow Knight delivers the greatest metroidvania experience I've ever gone through. After a quick introduction and a few simple areas, the game just throws area upon area at you and challenges you to explore them to your heart's content. It's crazy just how big the world is and how many secrets it holds. Not to mention how many areas are connected to other ones in interesting and even secret ways.

Generally, areas aren't gated by power-ups, so you can at least poke your head in and see what's up before turning back. Or you can do what I did and complete one of the harder areas first and unlock the majority of the map before finding one of the earliest powers you're supposed to get. It sounds bad, but that was all on me for ignoring the flow of the game and being dumb. It's great of the game to allow me to do that without trying to force me back on a sane path. It really lets you explore as you wish.

The game uses an interesting map system, which ties into the checkpoint system and the healing system. The first time you enter an area, you don't have a map. In order to get it, you have to traverse the area "blindly" and find the cartographer Cornifer tucked away somewhere and buy it from him. Depending on how hard the area is, this can be quite tense, but thanks to the healing system letting you continue on as long as you are good in battle, it is quite possible to make it in one go.

With map in hand, you can see everything Cornifer has mapped out, which usually isn't a lot. You then have to map out the rest yourself, but unlike other metroidvania titles, you can't directly do that. Just like before, you have to traverse unmapped areas "blindly" until you either find a checkpoint or backtrack to an old one when you are near death. Resting will refill your health and give the knight a chance to draw out what you've explored on the map. This approach slows the game down a bit, but it does train you to navigate using the environment first instead of just using the map. Thus, when you run through the area later, you will probably not even need the map much, unless it's one of the more maze-like areas.

While the map works great for just playing the game to completion, I found it a bit lacking when it comes to finding secrets. It doesn't use the standard square tiles, so you can't exactly scan the map for areas where there are likely to be secrets. Some places just veer out into space you'd think would be nothing. So to find everything, you have to scrape every wall, which is a tall task with a game world of this size. Still, with the game being so good in every other aspect, running around and hitting walls isn't a bad time. Hell, it makes finding new secrets feel even more rewarding.

Hollow Knight uses a familiar set of movement abilities as its power-ups, with most of them pulling second duty as combat abilities too. None are particularly inventive, save for the pogo slash you start the game with, which must be carefully timed and even works on hazards like spikes.

But the abilities being what they are is completely fine, as the controls are outstanding. Outside of the game's absurdly hard optional platforming challenge, I never felt like I wasn't in complete control of the knight's movements. This holds true for regular platforming and the more hectic jumping required during boss fights.

The combat is another highlight, as it is just as tight as the platforming. While it does require quick reactions, the controls never lag behind what the game asks of you. The knight has access to a basic slash using their nail, but as you explore, you can find nail arts and magic to round out your combat abilities, plus the aforementioned movement abilities.

Nail arts need to be charged for a few seconds, while magic uses Soul. Soul is mostly earned by striking enemies, but you cannot store a lot of it and it's also spent on the healing spell. This creates some interesting interactions during gameplay. You can't store a lot of Soul, so you might as well spend it when you can, but healing takes a few seconds to cast and any Soul spent charging up the healing spell is wasted if you cancel it or get hit. So a large part of combat (especially bosses) is about finding times to squeeze in a heal spell while remaining aggressive enough to maintain your supply of Soul. And if you're confident enough, you can forsake healing and instead spend Soul on magic to increase your DPS and beat the boss faster.

This setup allows for a lot of variety in encounters and boss fights, as sometimes it is best to be slow and sometimes you should just go nuts and attack wildly. While many enemies serve the same general purpose, it is still staggering just how many enemy types there are. All areas have multiple unique types of enemies that help make areas feel lived in and themed properly.

Should you die, then all your money will be dropped on the spot and converted into a shade that must be slain when you return from a checkpoint. If you fail and die again, that money is gone for good. It usually isn't hard to go back to where you were (especially since dying counts as resting and fills out the map), but if you were dumb and went into a hard area with a lot of money, then it can be difficult to earn back what you lost, as there are only so many treasures in the world to find and enemies usually don't drop that much.

The majority of the focus of the expansion content was to add even more bosses to fight, which has given the game a lot of bosses to its name. I like most of what they added, but man do they push the combat system to its limit with how hard they can be. I learned how to fight them after a lot of practice, but to then lump them all together into multiple boss rushes in the Godmaster expansion is just insane. Not only can a single one of the harder bosses ruin you quickly, but you also have to use the same set of equipment for most of them. This leads to some interesting choices when deciding which boss to make easier, but sweet mercy is it a trial only meant for those who think themselves worthy of the title of Godmaster.

As with the platforming and combat mechanics, the equipment system is quite simple, but allows for a lot of depth. As you explore, you collect various charms that you can equip while resting at a checkpoint. These charms all have interesting effects that change how you move and how you fight. They can be defensive, offensive or simly change one of your existing abilities. Even something seemingly useless like dealing minimal damage with a poison cloud while healing has its use.

But crucially, you can't equip many of them, so you need to always think about what charms are best for the current task. I went through most of the game using one set for exploration and another one for bosses. But once I hit the harder bosses, I had to specialize even further and experiment with new combinations. Some charms have synergy with eachother, making them even stronger when combined. I was surprised to see that every combination I thought would work did, with no arbitrary limitations outside of how costly the best charms are to equip.

So for example, there is one charm that increases healing power, but slows down the spell. And there is another one which improves the speed of the healing spell. Combine them, and you get a stronger spell that takes the standard amount of time to cast. Not only does this make healing more efficient Soul-wise, but it also makes it more viable to be sloppy with timing your healing. Thus, this combination is useful both during lengthy exploration and in boss fights.

It's so nice to see such a well thought out game with mechanics that intermingle without collapsing into themselves. Team Cherry did a great job and every developer stand to learn from their efforts, because Hollow Knight is an amazing game.