The Roads of Civilization 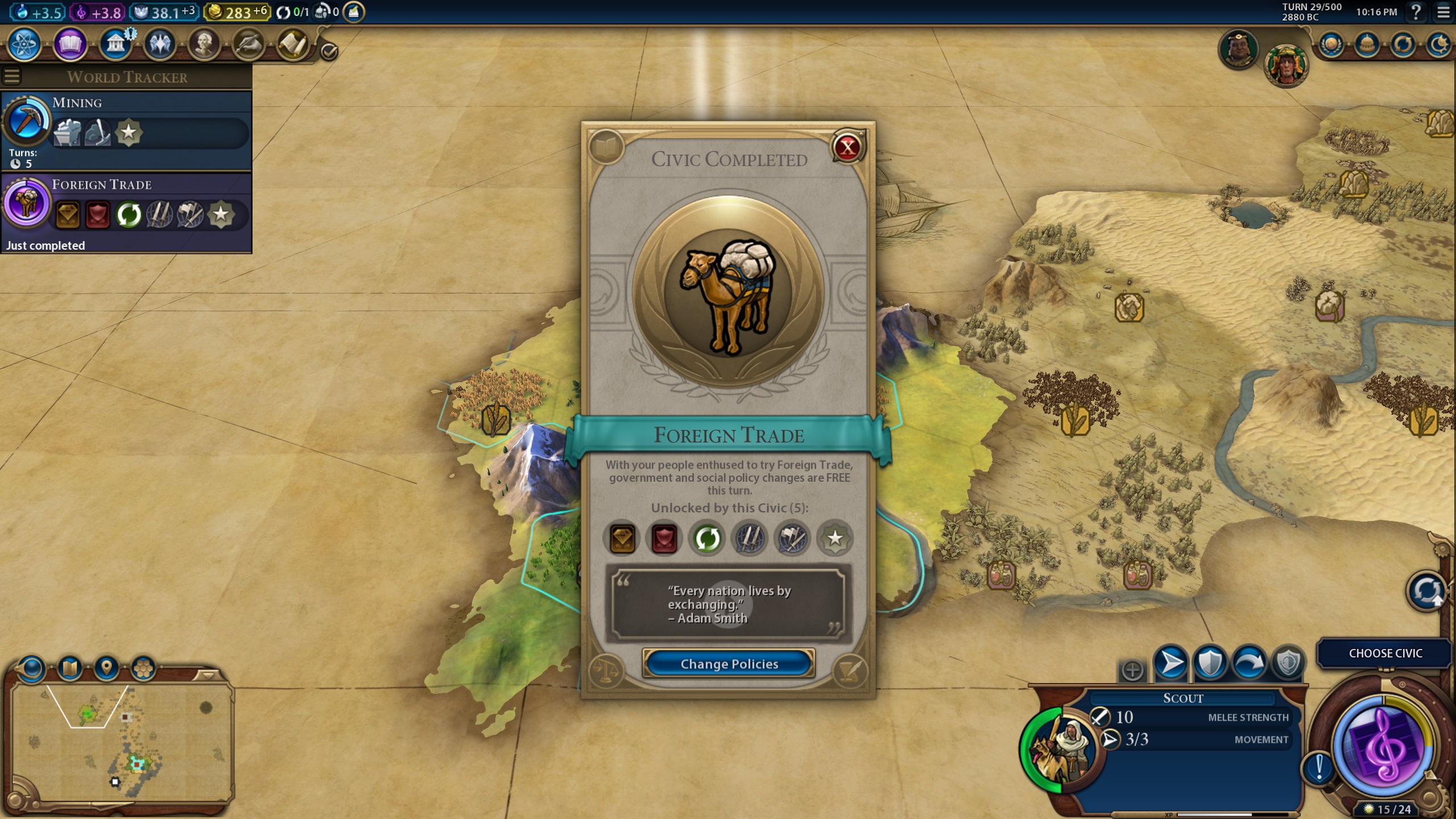 "Every nation lives by exchange"

There is something about Civilization 6 that feels different when compared to other games in the series. For the most part so much of it is the same, the AI is still terrible when it comes to diplomacy and the underlying mechanics are broadly similar. Yet the civilizations in the game seem to sprout onto the map; by design rather than abstraction, they feel like they grow now. The most talked about change that results in this feeling is the district mechanic which makes each city unique in its development as it now occupies real space on the map. However, the one that I think is most responsible for this feeling in terms of gameplay and strategy is the much overlooked road. 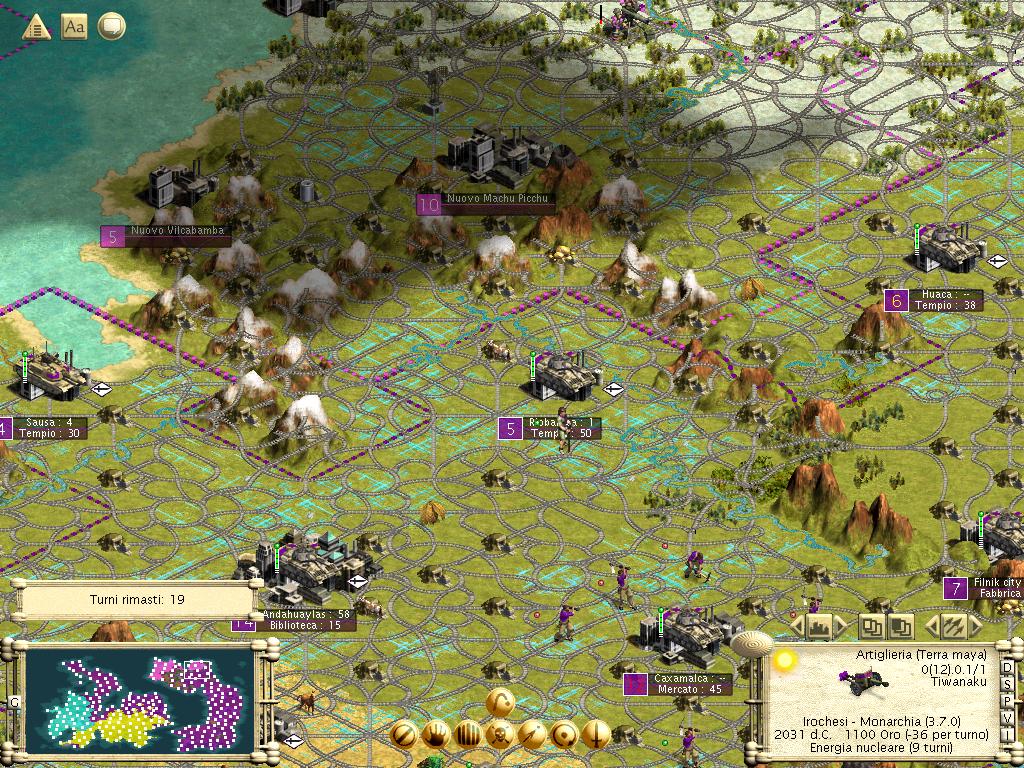 Roads are interesting things because despite how necessary they are, they aren’t often thought about. When thinking about civilizations especially, most thoughts will likely be in the realm of larger or more abstract things like skyscraper lined cities or cultures. Similarly in the games, roads have a large impact on so much of the gameplay yet aren’t given much thought outside of turn to turn minutiae. In all previous entries in the Civilization series, roads were a thing that you built to improve the stats on a tile. You built them so that the tile would cost less movement. Then, when you had two or more cities, you would build them so that your cities would be connected.

From that point on though roads would just be built all over the place. This was partly because workers would have nothing else to do but mostly because there seemed little reason to have tiles lying around that were harder to move through. The consequence of this road first mentality is that the mid to late game is just cycling over an army of workers and seeing what tile they can add a road to. Later on that process must be repeated when railroads are researched and armies of workers would go and upgrade all the roads. This chore has always been part of the series and I don’t think many people had issues with it as building this road network was rewarding and beneficial. In the newest entry this issue is dealt with in a really nice way. 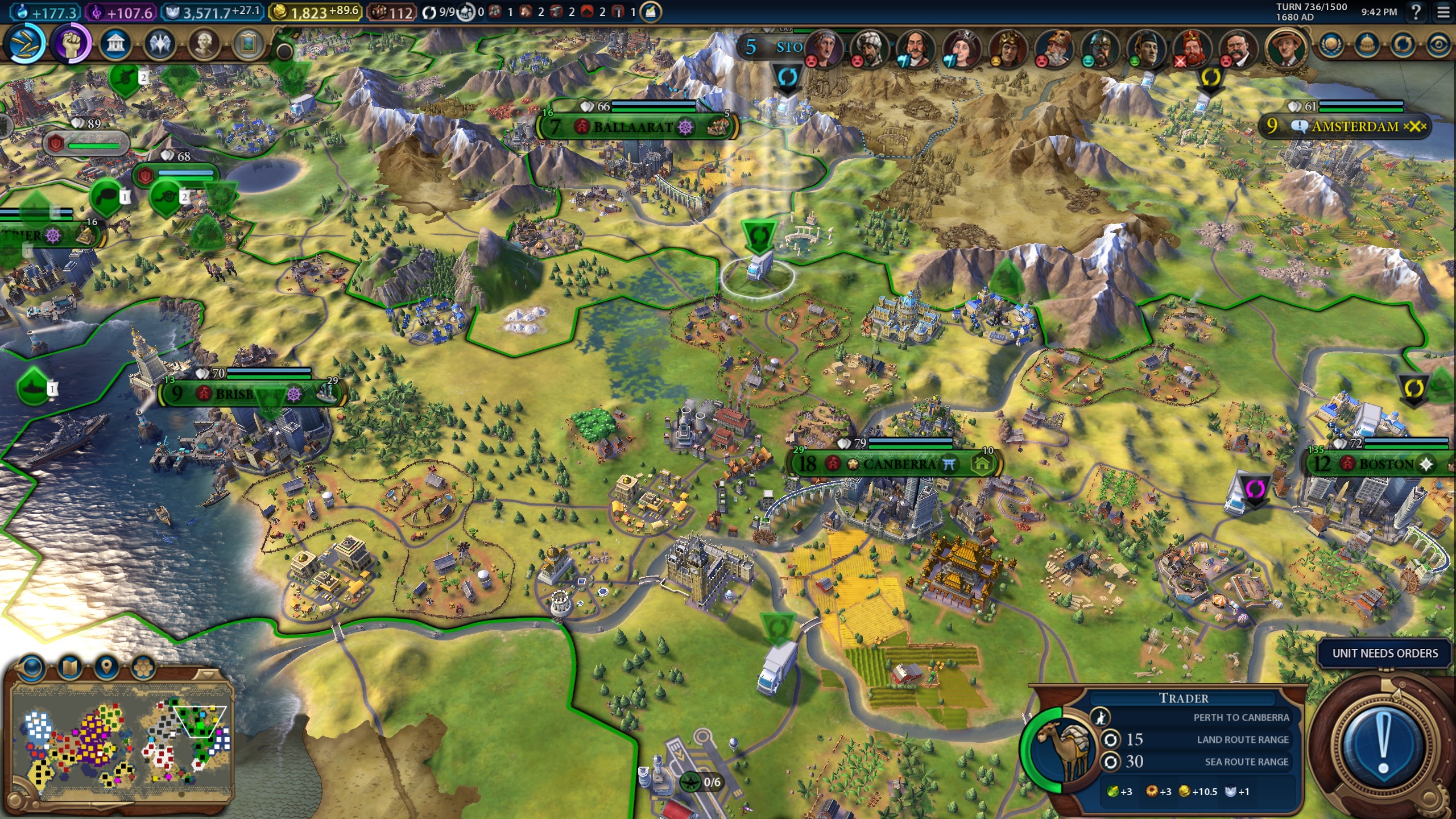 In Civilization 6 roads are built without much player agency. The act if building a trade caravan and then selecting a city to trade with sets things in motion. A road is then slowly built underneath the caravan as it makes its way to that city. This is a small but absolutely brilliant merging of two mechanics. I love this change because it not only removes the aforementioned chore but when coupled with workers having charges, it makes upgrading the roads to railroads a more serious consideration than it was before. Some player agency is lost but that allows the player to spend their time on more meaningful decisions and makes mid-late game turns go by faster.

Aside from the mechanical benefits, this change also goes a long way in fulfilling the general design philosophy of Civilization 6 -- which is to make things more organic. In previous Civilization games, you would build a road in order to connect things together and trade would then come afterward. This is a bit odd if you think about it because a road can then just exist, randomly in the middle of nowhere, and trade would be a by-product of roads. The ability to just build a single road that neither connects anything nor goes anywhere, reveals the seams of the game where roads are simply a checkbox inside of a tile class/object. As players, it was easy to just ignore these issues using our imaginations but by changing the mechanic, it opens the eyes to a better way of doing things. 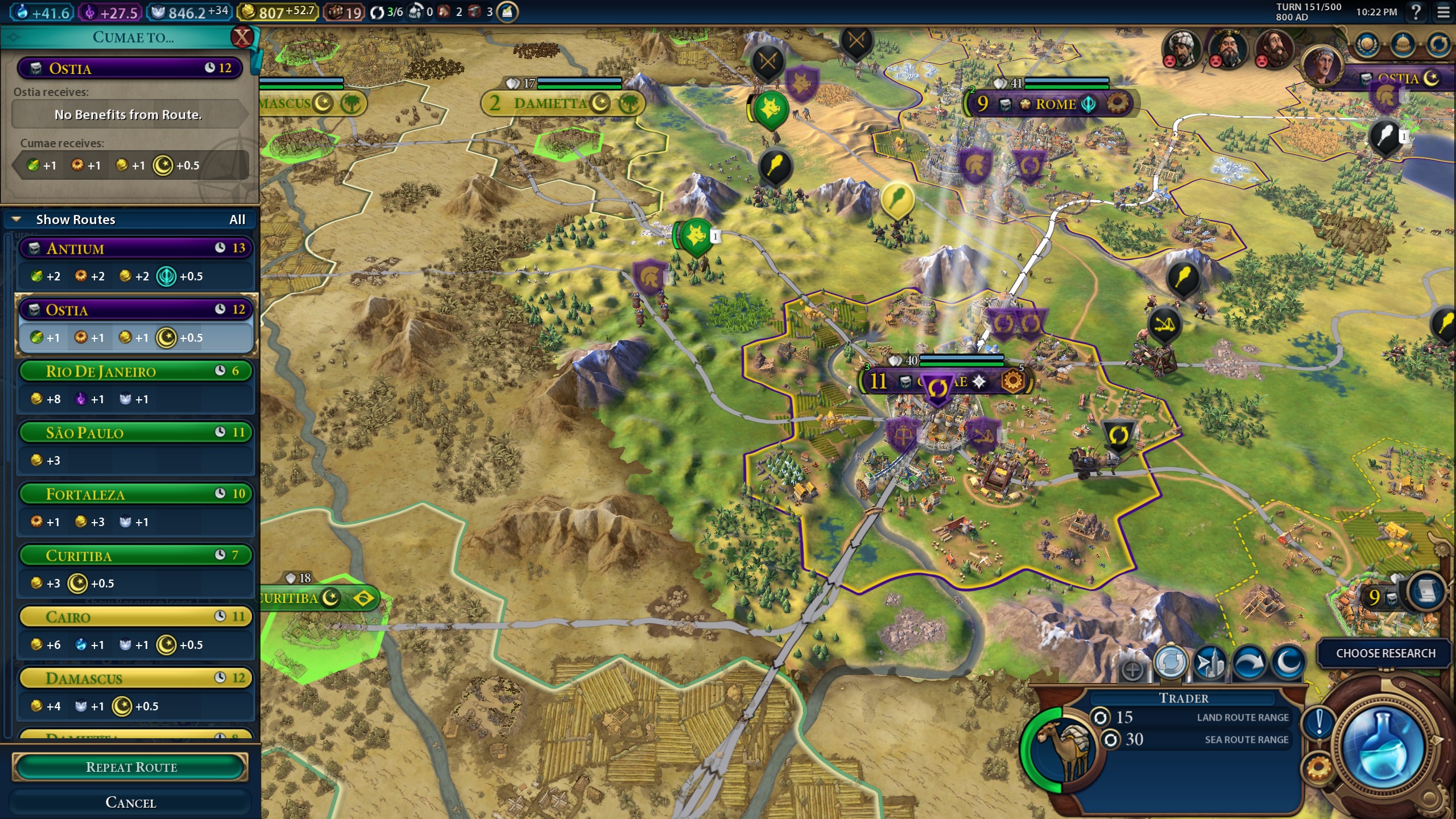 In Civilization 6 (and hopefully the entire series going forward) the order is reversed with civilizations naturally wanting to move things between cities and roads being built in order to fulfil that idea. This gives all roads a purpose, making them at least feel like their own entity within the game which effectively hides that seam. What is interesting is that roads were the single mechanic that didn’t follow that “building for an idea” paradigm. For instance, the idea of power leads to the development of military technology/units. The idea of wealth leads to the building of banks, etc. Roads are now a better mechanic thematically because they mimic more closely how roads on a city to city level work in real life; they would emerge out of a desire for trade.

Trade/commerce isn’t the only thing affected by this emergent property, the military arm of the civilization is now forced to give roads much more respect. Roads being fewer and really only criss-crossing between cities means that they end up becoming a natural terrain feature in their own right. When moving units around the map, roads must be given just as much consideration as hills for added defence or mountains for choke points. Their importance for military is honestly even more consequential because having a road pillaged by an enemy is a huge pain in the ass now – even in the late-game. The building of roads is now dictated by the placement of other cities and not by the player which means that making infinite redundant links is no longer really possible. This can be a painful thing for veteran players but it adds so much to the strategic element of the mid-late game. Whether defending or attacking, the roads that are present have to be factored into the strategy. 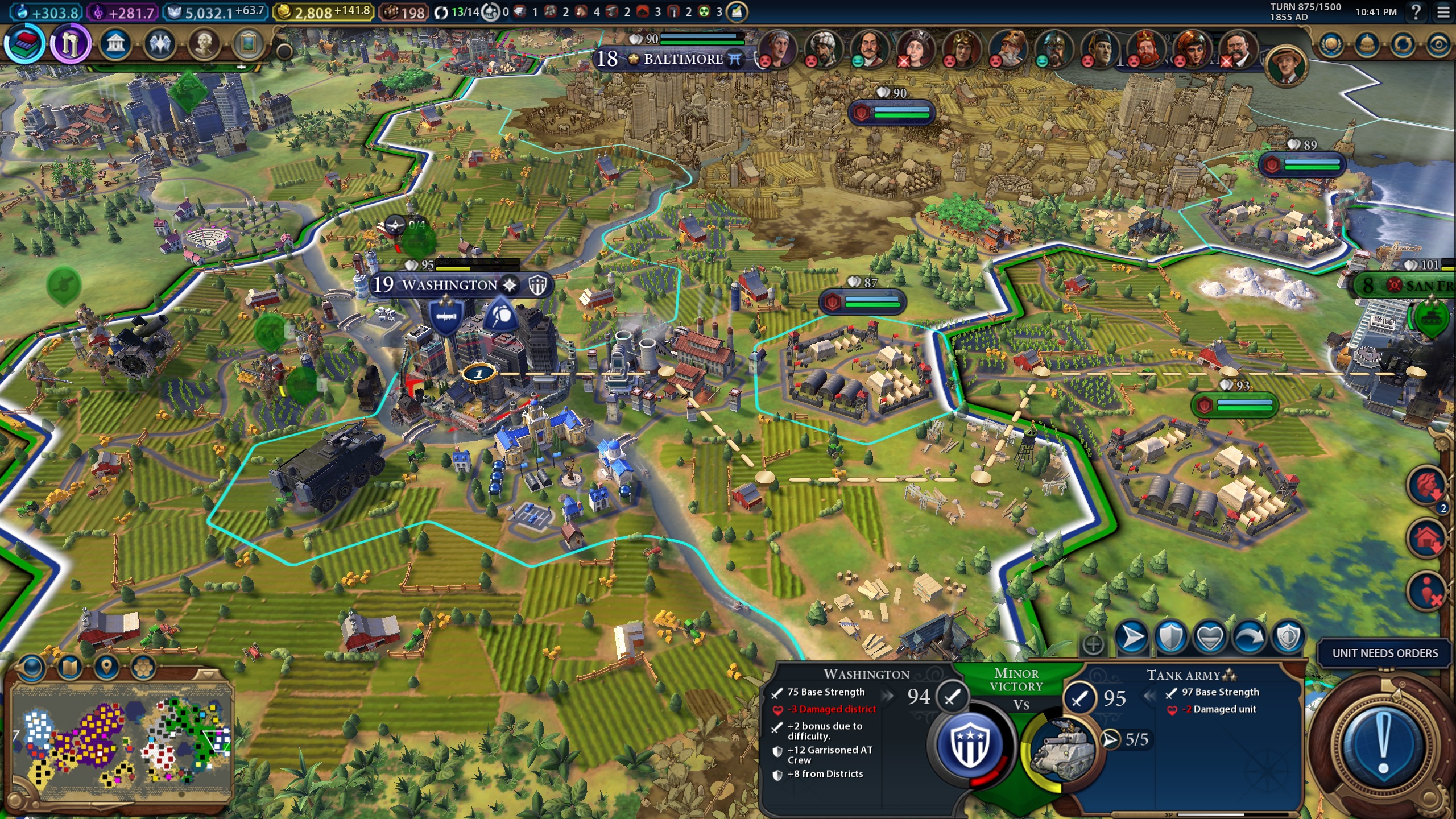 Roads are done right in Civilization 6, they hold much more impact to the gameplay and decision making than ever before. The choice to force roads to only connect cities together makes the whole game feel more organic. From that first city, spreads the arteries that connect together the other vital organs. From commerce and armies to culture, everything flows through these veins and this growth of civilization is something that we can now see and feel.

Postscript:
Civilization 6 opened my eyes in regards to this series and I think it was the roads that did it the most. It got me thinking that as a player base we had grown so accustomed to how things were that we couldn’t perceive of a different way to do things. After all, it took the 6th attempt and almost 3 decades for us to realise that roads had been done wrong. What other mechanic that we have overlooked could be changed for a better experience? There’s probably plenty but one that grabbed me just recently was the leaders. It seems a bit dumb to have one leader for the entirety of a civilization so why not have eras where a new leader is chosen. The pool could be different depending on the type of government and maybe each leader will have their own specific policies or buffs to choose from.
You could even have a thing where in game setup, you choose (maybe it would be developer chosen) a list of leaders. Then after certain points in the game the old leader dies and a new one from the list takes over. It would make your civilization feel larger than the people that control it and could lead to some interesting decisions where you might delay entering a new era to eek out the benefits of one leader before getting a new one. It could even lead to a new game type where the goal is to last as long as you can with the leaders you have. Certain events can lead to them being removed, assassinated or whatever.

Anyway, although this blog is Civilization specific, I think it is a good sign for videogames as a whole that there are instances, even in long running series, of changing pre-established mechanics to fit in better with theme and whatnot.