Darksiders is an action-adventure game made by Vigil Games and published by THQ on PC, Xbox 360 and PS3 in 2010. 6 years later, THQ Nordic published a remaster developed by Gunfire Games for XONE, PS4 and PC, with a Wii U version following in 2017. It stars War, one of the Horsemen of the Apocalypse, who has been accused of starting the apocalypse early and ending mankind. Determined to prove his innocence, War returns to Earth to find the one truly responsible. 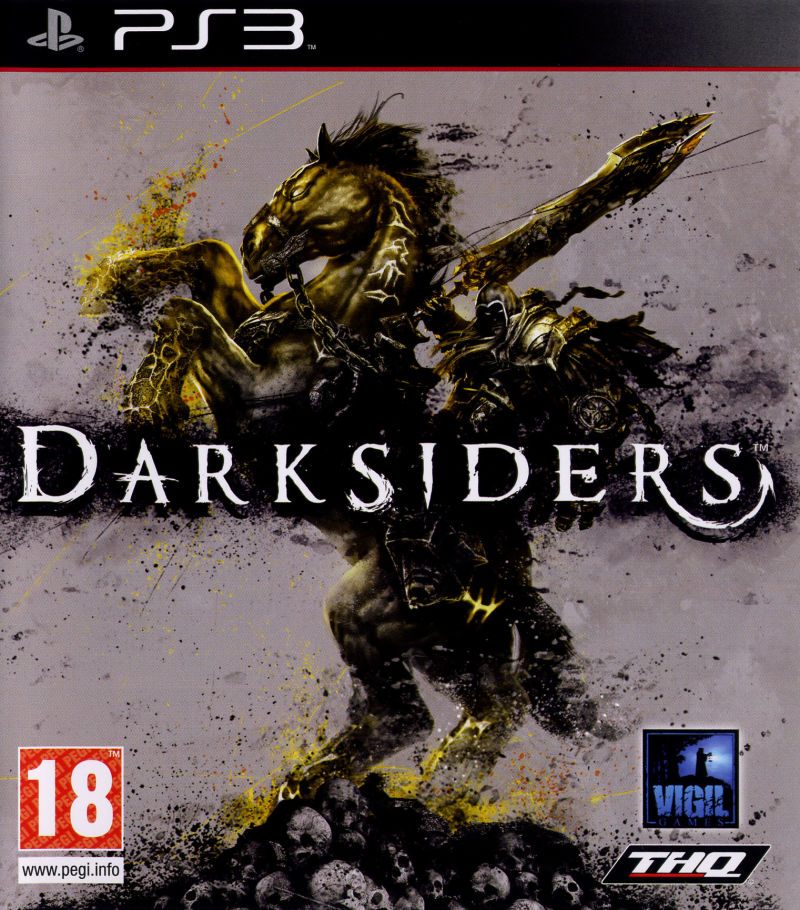 By most accounts, the story of Darksiders shouldn't work as well as it does. It's like a 90s comic book (giant shoulder pads included) published by a company outside of the big two that tries to outdo legacy comic books by being as metal as possible.

As such, it's entertaining, but also rather corny. War (as portrayed by the perfectly cast Liam 'o'Brien) is a completely one-note character with a neverending amount of no-nonsense gruffness to him. He fits the setting, but doesn't add much to it, beside a healthy helping of angry stares.

Even when bouncing off his ”companion”, the Watcher (played by Mark Hamill), he doesn't extend his emotional range. The whole cast performs well (shoutouts to angry giant scotsman Ulthane), but the game never manages to stop feeling slightly generic. I commend the larger-than-life presentation and tone, but there's just something missing from the game as a whole. It's just such a derivative story, having adapted the more metal parts of Christian mythology without filling in the gaps.

I think I'd be more invested if War brought more to the table. We barely get to know more about him than what his design conveys. Perhaps there isn't more to learn than that, but if there is, I'd be down to see it. It's a shame if he's just a character that doesn't understand what having fun or being sad is all about.

If You Want Peace Of Mind, Prepare For War

When playing Darksiders, I can always feel flashes of God of War and Devil May Cry in its combat system. It's not as good as either of those two, but it certainly has its charm.

In spite of his hulking appearance, War is rather agile. He can double jump and dash a fair distance, meaning that moving him around isn't an issue in combat. Fighting can get rather mindless (without becoming too easy, as some fights are surprisingly demanding), but you have a fair few options at hand to spice things up.

War's sword gives you access to timed combos and launchers à la DMC, while his spells function much like the magic in GoW, since they take a long time to recover. You can also block and parry, but the game supports offensive play way too much for those abilities to be very useful.

The grabs from GoW have been simplified and act only as an insta-kill button on weakened enemies. I can't say I mourn the loss of an enemy grab, but since you can throw cars at enemies, it feels like a lost oppurtunity to not be able to chuck demons at eachother. But thankfully, the animations for instakilling aren't overly long, so the game never overindulges in long QTE animations.

You also have two secondary weapons to swap between and use alongside the sword. They all fit in their own niche and together they give you good coverage. Sadly, they don't have interesting combined combos, you just substitute one weapon for another depending on when in a standard combo you use them. The ranged options are less diverse, but you can use them to manipulate the battlefield slightly, which is welcome.

Where I find issue with the combat lies in the finer details. The lock-on system isn't the best (especially since it puts the game in letterbox for no reason) and the game feels split between supporting free-form fighting and direction-based lock-on combat. It's also very easy to fall back on standard combos since the fancier stuff doesn't have have very distinct roles to fill in battle. Given more refinement, I think this could turn into a wonderful combat system.

Entering War's Chaos form and wrecking shit for a few seconds is pretty cathartic though.

I Heard You Liked Ocarina of Time

With combat derived from DMC and GoW, it isn't surprising that the game's major framework for progression is taken from another series, namely Zelda. And by gum, do they do the ”genre” justice.

War has access to a bunch of standard movement abilities (double jumping, wall-climbing, swimming, rope hanging and such), making it pretty fun to get around the apocalyptic overworld, especially since you can dash in almost all methods of traversal. And when that isn't enough, you make use of the equipment you find in dungeons.

The game follows the Zelda school of design almost to a tee, except I found it slightly more linear, at least in the overworld. Once you hit a dungeon, your first priority is to get your next piece of equipment so you can solve more complex puzzles and get to the boss.

The puzzles aren't complex, but engaging enough not to be insulting. Something I applaud the game for is having so many of the game's collectibles hidden in the dungeons, meaning that you have to mess around backtracking in the overworld a bit less. It also keeps dungeons rewarding throughout the whole thing.

Missing a lifestone shard (heart piece) from time to time isn't uncommon, but with the warp system unlocking early, you can go back as much as you want. And since the game gives you the ability to show chests on a map eventually, backtracking isn't actually awful.

While that's all fine and dandy, I think they' should have left it at the framework of Zelda instead of stealing dungeon items wholesale. The local equivalent to the boomerang and hookshot work nearly the same way as the originals. Hell, the bastards even implemented a watered-down portal gun for some reason!

Not satisfied with how Zelda handles stabbing tools, Darksiders features a few RPG mechanics. You can purchase moves, magic, consumables and some more assorted goodies from the shop to use as you please. It's nice to see that the souls of the dead aren't as useless as Rupees. It really keeps exploration rewarding, since there are so many nice things to buy.

Weapons upgrade with use, making backtracking faster as you play. And with the proper weapon enhancement equipped, you can get some fun auxiliary abilities. But since you can only equip one enhancement per weapon, the game doesn't allow for any deep customization.